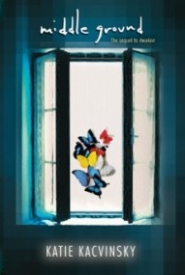 In this provocative cautionary tale for teens, the sequel to Awaken, seventeen-year-old Maddie’s rebellion against the digital-only life grows dangerous. Maddie is in Los Angeles, trying to stay out of trouble. But one night, a seemingly small act of defiance lands her in the place she fears the most: a detention center. Here, patients are reprogrammed to accept a digital existence. Maddie is now fighting for her mind, her soul, and her very life. Once again, Katie Kacvinsky paints a disturbing picture of our increasingly technology-based society.

Too Preachy But Otherwise Enjoyable
October 15, 2012
Overall rating
3.0
Plot
3.0
Characters
3.0
Writing Style
3.0
There's one thing pretty much every blogger I know agrees on: those early reviews are terrible. We all grow and change all the time, influenced by lives, friends, books, television shows, evolving new writing styles and review formats. My tastes have changed so much over the two years I've been blogging, and I don't always know how much to trust my own opinions from a couple years back. Sometimes it's even difficult to trust more recent opinions, because if you catch a book in the perfect mood, you'll love it, even if 9 times out of 10, you would rather feed yourself to a velociraptor than sit through it. This is my long-winded way of saying that I really liked Awaken at the time, and very much wanted to read the sequel, but feared that it probably wasn't as good as I thought then. Well, truth be told, I wouldn't like it as much now, but I did still enjoy Middle Ground with more dystopias under my belt.

What I like most about this series is the writing. Kacvinsky achieves a nice teenage voice, I think, not overly simple or complex. Maddie really does read a like teen, complete with incorrect assumptions based on her narrow-minded worldview and obsession with boys, or one boy in particular. That sounds bad, but, let's face it, she's young and still learning, but at pretty much every point feels like she knows everything, even when the reader can tell she super doesn't. This rings true with what I remember of being a teen, that feeling that pretty much everything was an external problem and that you had everything worked out. The older you get, it seems the less anything seems to make sense, at least for me.

From what I can gather from some review reading, my memory not permitting me to recall Awaken clearly and time not permitting a reread, romance rather took the front seat to the dystopian plot in the first book. In this one, I think they were a bit more even. Maddie, like Eve from Anna Carey's trilogy, does spend a lot of time thinking about Justin, but she does actually turn her mind and her strength to real problems. There are scenes where female characters discuss things that aren't boys, so hurrah Bechdel test passed.

Still, the world building is pretty weak and vague. Basically, Justin's group of rebels opposes DS (Digital School), because they think people need to get out and live their lives. The problem with this is that you're only in school for part of your life, and I have no idea what grown ups' lives are like in this world, with the exception of the people working for digital school; the education system just doesn't seem as huge a foe as, say, the government as a whole, though I do get their point that if you are inculcated in the belief that it's better to stay inside all day, then you'll continue to do so. Where does food come from, I wonder? No idea. There's so much left unsaid.

Still, lame world building happens a lot in dystopias, sad though that is to admit. What makes it worse here is how preachy Kacvinsky is about it. The horrors of DS, of a life fully digital, are constantly outlined, like a kid trying to write a paper about technology gone bad. All of the deep discussions come across heavy-handed, as though the answers are being passed down to you, rather than provoking a feeling or thoughts within the reader. It would have helped to see some examples of people gone too far into their digital lives, unwilling to leave their chairs and drowning in their own filth or something. All we really see are perfectly functional people, none of whom seem to suffer from a fear of the outdoors. Sure, it's odd that people would go to a club and plug into the computer to talk to one another as avatars even though they're physically in the same room, but so what?

The book improved when Maggie got taken to the LADC (Los Angeles Detention Center). In there, we do get a better sense of why the system is horrific. This section reminded me of A Clockwork Orange a bit. This added a much harsher, more realistic feeling to the series. Prior to this, it felt a lot more like a girl rebelling against her daddy because he didn't like her boyfriend (though they weren't officially together at the time).

I expected to be seriously annoyed by the romance, and, certainly, there were moments where I wanted to kick them both in the shins. For example, at the beginning, he's disappeared for months without a word, randomly shows up, and she acts like nothing happened. She does eventually lecture him about communication, but he should have gotten the cold shoulder first. *sassy finger waggle* Then later there's a lot of special snowflake stuff where she's afraid of people and he's the only one she can touch. I hate when the reason for things is 'the power of love,' even when it happened in Harry Potter.

However, all of that does get counterbalanced by Maddie actually learning through the course of the book. In Awaken, she basically shifted from obedience to her father's will to obedience to Justin's. This was bad. As this book goes along, she comes to realize the importance of independence and doing things for herself. She makes choices Justin doesn't entirely approve of and becomes more of a partner to him than an inferior. There are even times where he lets her take charge, and I really appreciate this relationship took a turn for the healthy. Though again a bit preachy, I thought this character arc felt real utterly realistic, especially for a girl with daddy issues.

I realize this all comes off a bit ranty, but, as I said, though I could snark about this more, I really did like reading it. The authenticity of Maddie's voice, naive though she may be, kept me wrapped up in the story. I think this series will be a big hit with readers who enjoy the Eve series by Anna Carey or The Pledge series by Kimberly Derting, dystopias that focus a bit more on romance than world building.
Good Points
Authentic voice
Heroine learns from her experiences