The Opposite of Hallelujah 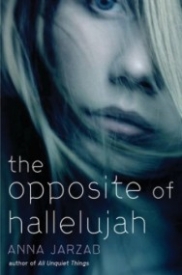 Caro Mitchell considers herself an only child—and she likes it that way. After all, her much older sister, Hannah, left home eight years ago, and Caro barely remembers her. So when Caro’s parents drop the bombshell news that Hannah is returning to live with them, Caro feels as if an interloper is crashing her family. To her, Hannah’s a total stranger, someone who haunts their home with her meek and withdrawn presence, and who refuses to talk about her life and why she went away. Caro can’t understand why her parents cut her sister so much slack, and why they’re not pushing for answers.

Unable to understand Hannah, Caro resorts to telling lies about her mysterious reappearance. But when those lies alienate Caro’s new boyfriend and put her on the outs with her friends and her parents, she seeks solace from an unexpected source. And when she unearths a clue about Hannah’s past—one that could save Hannah from the dark secret that possesses her—Caro begins to see her sister in a whole new light.
Tweet

A YA Book with Present Parents!
November 11, 2012
Overall rating
4.7
Plot
5.0
Characters
5.0
Writing Style
4.0
Going into The Opposite of Hallelujah, I had mildly high expectations, knowing that my friend Katie of Blook Girl loved it. Still, I wasn't so sure about the subject matter, and just really didn't know that much about it, since I pretty scrupulously avoid reviews of books I plan to read, even from my favorite reviewers. Katie was completely right about this book. The Opposite of Hallelujah gave me so many feels: sadness, awkwardness, hope, and fangirling happiness.

My very favorite thing about The Opposite of Hallelujah, what makes it stand out so incredibly fresh and original to me, is that it centers around a family. Yes, there's romance and school and all of that, but Caro's relationship with her family members comes first, primarily that with her much older sister Hannah. Caro scarcely knew Hannah (eleven years her senior) when she went away to live in a convent when Caro was just eight years old. Caro didn't know how to deal with this, what it all meant, so she simplified things and told people her sister was dead. This came out, as such things tend to, earning Caro the nickname "Caroliar," which also gave Caro another grudge to hold against her sister, added to the sense of abandonment she already felt.

Fast forward a few years to the summer before Caro's junior year of high school. News comes to the Mitchell family that Hannah is coming home from the convent. Caro's parents, who have missed their daughter and been deeply hurt that she left them, even for a vocation, are thrilled to have her back. Caro, on the other hand, wishes Hannah, and the whole big, confusing, mess of resulting emotions had never come back.

That sounds mean, but Caro doesn't know this woman who appears off the train. Caro feels like an only child, and she doesn't appreciate her parents' orders that she behave a certain way to Hannah. Honestly, Caro does not feel that Hannah deserves to be so easily accepted back into the family, since she abandoned them so utterly. Immediately, Caro falls back into her old pattern, lying to people at school about her sister. She does not even tell her best friends or boyfriend that Hannah's back from the convent. Later, when it's outed that Hannah is back, she lies about where Hannah was.

When I first started reading, I was momentarily put off by the writing (not personally my favorite style) and the formatting (obnoxiously large font to make the book seem longer than it is), but I soon stopped noticing or caring about any of that, because Caro's character is so powerful. She has such a strong, authentic teen voice. All of the stupid things she does make a messed up sort of sense, because you're seeing through her eyes and you know how her mind works. Besides, aside from the lying, she's such a funny, clever, strong-spirited girl that you just root for her so hard to work through her issues.

The Mitchell family feels so much like a real family: they have awkward moments, they fight, they love. It's just so beautiful, and so rarely depicted in young adult fiction, because so much of it needs the heroine to be accomplishing some gargantuan feat, not living through daily life. Her parents love both of them so much. They make mistakes, of course, because that's what parents do, but they're always there to help or to punish as needed. Jarzab includes some very typical parent-child fights that totally had me flashing back to my teen years.

At the beginning of the book, Caro has a boyfriend (or, at least, she thinks that's what he is), Derek, who has been gone at camp. When he gets back, he doesn't call, and she does what any self-respecting girl would do: freaks out and calls her best friends for advice. Reb and Erin agree: this is bad news, and that she should probably dump him before he dumps her. She decides to do that, and goes to his house, where he beats her to the draw. I share this to illustrate how high school and realistically awkward it is. There are so many scenes that struck a perfect chord.

Anyway, stupid Derek dumping her cleared the way for a wonderful, adorable guy. Pawel is, stereotypically, the new guy at school. Yes, I rolled my eyes at this, but he's so dang adorable, that I got over that really quickly. For one thing, he's Polish and has an impossible to pronounce name (Caro's friends just call him Polish), and, for another, he is one of the most sweet, caring guys I've encountered in YA. He and Caro have an immediate connection, but don't declare it right off the bat. You guys, I totally said awwwww out loud so many times reading about them.

Another well-drawn character is that of Pastor Bob. Religion is, obviously, a huge theme in this book, what with Hannah's return from a convent and everything. I can be a bit touchy about this subject, but it was handled marvelously here. Pastor Bob does not force anything on anyone, and he's a genuinely caring, helpful guy. The discussions of religion are more theological than specifically Christian in nature. He and Caro develop a real friendship that I found very touching.

This review is approaching epic proportions, so I'll wrap things up. In short, if you are a reader who bemoans the lack of real family interaction in YA, you should probably get your hands on it right now. Anna Jarzab has just joined my list of authors whose books I must stalk.