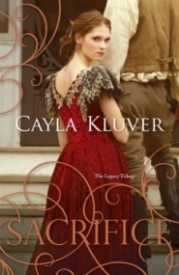 This is not the time for the fight to end. Now is when the fight will begin. This is the time to regain what has been lost.

Alera
Queen of a fallen kingdom, secretly in love with the enemy.

Shaselle
Daughter of a murdered father, rebel with a cause.

One lives behind the former Hytanican palace walls and walks the razor's edge to keep the fragile peace in her beloved homeland. The other slips through the war-torn streets, seeking retribution for her family's tragedy, following whispers of insurgency.

Both face choices that will separate them from those they cannot help but love. As their stories intertwine, a conspiracy ignites that may end in slavery or death—or lead to freedom anew, if only each can face what must be sacrificed.

A Satisfying Conclusion to a Series That Never Fails to Surprise Me
October 03, 2012
Overall rating
3.7
Plot
4.0
Characters
3.0
Writing Style
4.0
The Legacy Trilogy has not garnered immense acclaim from most of my blogger friends. In fact, a full three of them rated the first book one star on Goodreads. So yeah, these books aren't for everyone, and I know that, but, despite them being imperfect, I really love this series. Sacrifice was one of my most desired ARCs of 2012, and that's why it was my first ARC request as a YABC staff reviewer. I'm happy to have been able to read it early, because, yet again, I found myself wholly swept up in Cayla Kluver's world. At this point, be advised that there will be spoilers for the first two books in the rest of this review.

Sacrifice gets off to a bit of a slow start, dealing with the political ramifications of Cokyri's takeover of Hytanica. That first chapter was a snoozefest, but, thankfully, things picked up a few chapters in. For the rest of the novel, I was wholly engrossed, just as I remember being every time I read a book in this series.

What I love about these books, what makes me look past their faults and hold them up as personal favorites, is the fact they Cayla Kluver always manages to convince me that I know what's going to happen and then pull the rug right out from under me. Seriously, this happened in every book, usually more than once. It's so rare for me to be so unsure what will happen to the characters, and I love that feeling, especially since Kluver does so without stooping to impossible twists. I just find that so refreshing, and it's also why I'm always on tenterhooks as I read, because anything could happen.

Both Legacy and Allegiance were written entirely in Alera's perspective, but in Sacrifice Kluver adds a second narrator, Shaselle. At first I was hugely skeptical, but I ended up really liking Shaselle's point of view. She's snarky and very different from Alera. Her romance plot line was cute, and I really loved her refusal to be put into a box of people's expectations. I was just sitting here about to make the assertion that her perspective doesn't really add anything to the story from a narrative point of view, but, on further reflection, I think her story serves as a foil to Alera's, showing how things might have been a bit different had Alera chosen another path. Maybe I'm crazy, but I like this new theory of mine.

Now, the romance did get me down a little bit. Here's the thing. I liked Narian at first in Legacy, but I very much switched allegiance (see what I did there?) in the next book. Steldor, while obnoxious at first, just seems so much more passionate and interesting than Narian. I kept holding out hope for him to win in the end, but, honestly, I knew as soon as I saw the second narrator that Alera wouldn't have any love triangle drama in this one. I'm glad Alera's happy, but my heart breaks for Steldor. Perhaps a spinoff about Steldor is in order?

The writing was a bit clunky in places, but I hope those issues will be fixed in the final version. I usually don't mention such things when reviewing ARCs, but I have to comment on one particular oddity. At one point, Shaselle referres to a horse as 'loco.' Since when do they know Spanish in Hytanica? The use of that totally threw me out of the text for a bit, and I hope it's caught by the editor before final printing.

The ending was a little bit too happy for my tastes, but good enough. All in all, I declare this an immensely satisfying conclusion to the trilogy, though I still want that spinoff. I hope Cayla Kluver continues to write books than can completely catch me off guard!

Christina Franke, Staff Top 10 Reviewer 678 reviews
Report this review Comments (0) | Was this review helpful to you? 3 0

Olivia Farr, Staff Reviewer
"WARDENS OF ETERNITY follows Ziva, a young woman who was abandoned as a toddler, became a ward of the state,..."

Olivia Farr, Staff Reviewer
"THE HAND ON THE WALL is a thrilling conclusion to the TRULY DEVIOUS series. Here, the students are at Ellingham,..."