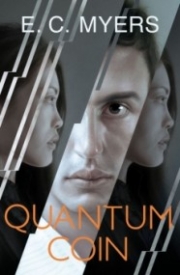 The sequel to the exciting adventure spun across parallel worlds!

Ephraim thought his universe-hopping days were over. He's done wishing for magic solutions to his problems; his quantum coin has been powerless for almost a year, and he's settled into a normal life with his girlfriend, Jena. But then an old friend crashes their senior prom: Jena's identical twin from a parallel world, Zoe.

Zoe's timing couldn't be worse. It turns out that Ephraim's problems are far from over, and they're much more complicated than his love life: The multiverse is at stake—and it might just be Ephraim's fault.

Ephraim, Jena, and Zoe embark on a mission across multiple worlds to learn what's going wrong and how to stop it. They will have to draw on every resource available and trust in alternate versions of themselves and their friends, before it's too late for all of them.

If Ephraim and his companions can put their many differences aside and learn to work together, they might have a chance to save the multiverse. But ultimately, the solution may depend on how much they're willing to sacrifice for the sake of humanity... and each other.
Tweet

Obviously, you should be cautious reading this review unless you've already read Fair Coin. I will keep things as spoiler-free as possible for book one, but that's pretty tricky. First and last paragraph will be spoiler-free totally. Now, if you've read my review for Fair Coin, you know that I quite liked it, but did have some reservations. Happily, Quantum Coin proves that the second book in a series can be stronger than its predecessor. If you were on the fence about reading Fair Coin, I'm telling you now that the awesomeness of this the sequel should cause you to choose the universe where you read E.C. Myer's Coin series.

Where Fair Coin has a fantasy feel for much of the book, Quantum Coin is straight science fiction, and I revelled in that, since I don't get nearly enough of that genre. In the first book, I had some difficulty grasping the concepts, though not to the point of frustration, but I felt less a fish out of water on this second go round. I'm not saying that I completely understood everything, but I didn't have any real WTF IS HAPPENING moments either. Myers does an excellent job keeping things on a manageable level of detail.

My main stumbling block in the first book were the characters, who, while not entirely unlikable, did venture into the unbelievable sometimes. They got better as they went along, and continued to develop and grow throughout this book as well. Ephraim and Nathan are way better in this book, and I liked how everyone got to be important at some time or other, though the Jenas really did rule the whole figuring things out part. Doug may be one of the cutest kids in literature, as he charmed my miserly heart. Dick made me laugh; you'll find out why towards the end.

I did not like the Jenas/Zoe, though. They are just not very nice women, despite being gorgeous geniuses. At least, Jena was less of a manicpixiedreamgirl this time. I will say, though, that Jena probably has the most in common with me, aside from bring super useful in crisis, Asian, and attractive to everyone. You know, little differences. Jena loves to read, and one of my favorite touches Myers put in the book was how when they went to different universes, books that aren't finished in our world ARE, like Jane Austen's Sanditon. I WANT TO GO TO THERE. For her love of fiction, I can't completely hate her. I mean, the world might be ending, but she still spends a lot of her time with her nose shoved in a book; I like those priorities.

The romance aspects I must admit I'm rather torn about. The whole love triangle with alternate reality versions of the same person is both very cool and very annoying. Honestly, I'm not quite sure how I feel about it. I think I'm coming down more towards the 'fascinating concept' side, just because Ephraim doesn't act like a complete jerk in that situation, when he could have tried to date both in some creepy, manly fantasy. Thankfully, he didn't do that, because I would have reached into the book and slapped him silly.

The beauty of Quantum Coin lies in the details. If you read closely enough, Myers throws in a bunch of nerdy wordplay and references, some of which made me laugh out loud, even though this isn't a humor book. Though I want to leave most of the references for you guys to find, I just have to share my very favorite one, because it was so subtle and wonderful. This is from the ARC, so it could be changed, but I hope it's not. High five for everyone who gets the reference!

"'Imagine: If shifting from one universe to another is like moving up or down to parallel layers, overlapping with one universe, then going to another timeline is like taking a jump to the left.'
'Or a step to the right,' Jena said wryly."

It's a truly rare thing to encounter a second book that improves on the first, but Quantum Coin truly does. On the down side, this series does appear to be complete. I've gotten so used to trilogies that I was totally expecting more. I will eagerly await E.C. Myers' next writerly endeavor!