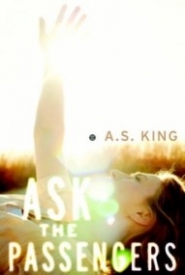 Astrid Jones copes with her small town's gossip and narrow-mindedness by staring at the sky and imagining that she's sending love to the passengers in the airplanes flying high over her backyard. Maybe they'll know what to do with it. Maybe it'll make them happy. Maybe they'll need it. Her mother doesn't want it, her father's always stoned, her perfect sister's too busy trying to fit in, and the people in her small town would never allow her to love the person she really wants to: another girl named Dee. There's no one Astrid feels she can talk to about this deep secret or the profound questions that she's trying to answer. But little does she know just how much sending her love--and asking the right questions--will affect the passengers' lives, and her own, for the better.

In this unmistakably original portrayal of a girl struggling to break free of society's boxes and definitions, Printz Honor author A.S. King asks readers to question everything--and offers hope to those who will never stop seeking and sharing real love.
Tweet

Okay, it's official. I think A.S. King is one of the very best YA writers out there. Ask the Passengers is only my second experience with King, but I loved it just as much as, perhaps even more than, the first one I read, Everybody Sees the Ants. Even better, King falls into that realm of authors who can do something totally new every time. She has some themes in common, but the books themselves are very different. One has a younger male teen lead, one an older female teen, and both voices come through completely authentic. I am always so incredibly impressed by authors who can vary their subject matter, style and characters so much, sort of reinventing themselves with each book.

I just adore King's writing. She is, for me, one of the most quotable authors. Her writing isn't overly complex, but it gets the feelings and the point across so incredibly strongly. There are so many lines that I wanted to read aloud to my friend on vacation with me so that she could appreciate King's brilliance, but I couldn't because I'm so making her read this book next.

Ask the Passengers focuses on the theme of belonging, of identity, of self-discovery, and of peer pressure. Astrid Jones doesn't want to be put into boxes, doesn't want to be forced to be any one thing. She just wants to be Astrid Jones, whoever that is. Why does it have to matter so much whether we're gay or straight, white or brown, religious or agnostic, male or female, wealthy or poor, popular or unpopular? Astrid struggles with everyone's expectations and perceptions, afraid to be who she is but also unwilling to pretend to be something or someone else.

These themes resonated with me, because, really, who the heck cares about those things? I mean, COME ON, it's the 21st century and we're still so caught up in defining things one way or another and on what's right that gay marriage is legal hardly anywhere. King brings up a lot of powerful issues and looks at the issue of being a girl in love with a girl in a different way than I have yet seen, and really made me consider the issue from a new angle. Plus, I sympathized with her desire to not have anyone know her business, because that's totally how I am. Why does everyone need to know?

Of course, the book also has humor, because the best issues books are imbued with humor, because a spoonful of sugar really does help the medicine go down. The whole opening plot is about how Astrid is weighed down by all of these secrets, those of her friends, her family and herself. Her friends, Justin and Kristina, are a power couple at school, the kind to be nominated for Homecoming King and Queen. Every Friday, they go on double dates with another couple, Donna and Chad. Actually, though, Justin's dating Chad and Kristina's dating Donna. SCANDAL! The only one who knows is Astrid, who's trying to decide whether to confess that she's actually dating a girl too, Dee, who works with her. I thought the whole situation was a hot mess, but I loved how theatrical it was. This would make a fantastic indie film. Just saying.

Another thing that I loved about the book, one which I could definitely see alienating some readers is Astrid's newly developed fascination with philosophy in general and Socrates in particular. I love philosophy myself, but the frequent discussions of it could put off some people. Even more than that, the philosophy takes a weird turn, in that Astrid creates an imaginary friend version of Socrates, who she dubs Frank Socrates; he helps her out along the way, making her question her behavior and what she holds true. I thought this worked, because of how motivated Astrid was by him and just her sheer exuberance about the class in general, but I do think it's interesting that both of her MCs I've read so far have had imaginary friends. Very odd, that.

My very favorite thing, though, was the part that gave the book its title: Astrid's love of planes and their passengers. Astrid does this thing where she will lie on the ground or on picnic tables and stare up at the sky, watching for planes. When she sees planes, she sends the passengers her love, along with her questions and frustrations, in a way of trying to help other people feel more loved and comfortable than she herself does. That was awesome just in and of itself. Better still, though, were the snippets of other people's stories (though a couple were too off the wall for me), showing the effect her little bits of love sent into the universe had on someone or other on the plane. These were all incredibly touching and moving, and I loved this little dose of magical realism.

I do know that everyone probably won't love A.S. King; I suspect her books will just be too weird for a lot of people. I, however, love them and want to strongly urge everyone who liked thought-provoking, quirky, clever books to read them. From what I can tell, A.S. King does not have anywhere near the name recognition and popularity she deserves.

Christina Franke, Staff Top 10 Reviewer 678 reviews
Report this review Comments (0) | Was this review helpful to you? 2 0

Bethany Wicker, Listings Manager & Staff Reviewer
"Clark Kent is trying to be an ordinary thirteen-year-old boy but he has a very extraordinary pastime. He loves saving..."