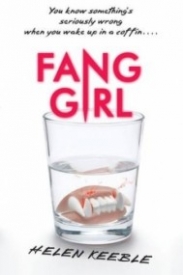 Sure, the idea of vampires is sexy, but who actually dreams of spending eternity as a pasty, bloodthirsty fifteen-year-old?

Unfortunately, the somewhat psychotic vampire who turned me into a bloodsucker didn't bother to ask first. Now I'm dealing with parents who want me to vamp them, a younger brother who's convinced I'm a zombie, and a seriously ripped vampire hunter who either wants to stake me or make out with me. Not sure which. Oh and PS, none of my favorite fanfic prepared me to deal with vampire politics—which are looking pretty tricky based on the undead Elder trying to hunt me down.

A Hilarious New Spin on Vampires
March 24, 2013 (Updated: March 25, 2013)
Overall rating
4.0
Plot
4.0
Characters
4.0
Writing Style
4.0
What I Loved:
Fang Girl is precisely what I hoped it would be: a light, hilarious read, the perfect snack to break up the depressing fare I generally read.

Vampires have been done to death, in just about every way possible. You would think it wouldn't be possible to put a fun, new spin on them anymore, without totally going insane with the mythology. Well, Keeble shows that there's still room for innovation. Her vampire mythos is definitely my favorite aspect of the novel. They've got some awesome powers, like being able to see through the eyes of other vampires in their bloodline, and some serious flaws, like being incredibly OCD. Keeble does a great job of balancing humor and an actual, convincing plot.

Reading Fang Girl, I couldn't help but think of another parody of vampire fiction I read, The Reformed Vampire Support Group. That one came out first, but unlike Jinks' novel, Keeble's is actually funny. Where TRVSG thought detailed description of guinea pig meals were the height of humor, Keeble leaves the guinea pigs alive and has vampires running around like demented Cinderellas, picking up paper clips from the road instead of lentils from the ashes.

The characters are all properly quirky, and likable, even most of the evil ones. Jane herself is awesome, very smart and always trying to make the best out of every situation. However, I feel like the secondary characters really stole the show. Jane's family are delightful and incredibly supportive (*cough* unlike most YA families *cough*), totally excepting their daughter, vampire or no. Plus, they're all hilarious, especially the mom with a penchant for research and Zack, her brother, and his obsession with all things steampunk. Speaking of the mom's research, there's Jane's childe vampire, Brains, a goldfish turned in one of Mum's experiments. Brains is as awesome as he sounds. I also love Sarah, who's sweet and helpless on the outside, but an evil genius on the inside. If this were a movie, she would be Chloe Moretz, which is just how intense she is.

Just so you know, the stress on romance in the blurb with the sixth point about the ripped vampire hunter? It's seriously exaggerated. While he does exist and does have cheese grater abs, there's really not much romance in this book. Fang Girl has enough hints at it to appease those who like a couple to ship, but little enough actually romantic drama to keep those sick of all the romance in YA very happy. Really, all there is to the romance is a couple of comments on the kids being attracted to one another and some jokes. I'm glad about that, because the book would have needed to be longer to really sell the romance.

The Final Verdict:
Keeble has a real talent for humorous writing, and I'm so excited to see what she'll do as gets even more practiced with it. I'm very excited to check out her second book, No Angel, which comes out later this year.

Christina Franke, Staff Top 10 Reviewer 678 reviews
Report this review Comments (1) | Was this review helpful to you? 0 0
A Different Bite Out of Life
September 12, 2012
Overall rating
4.3
Plot
4.0
Characters
4.0
Writing Style
5.0
Fantastic humor, twists in plot. Snarky narrator with spunk . Laugh out loud until the barista at Starbucks stares at you like you at crazy. Jane is a spunky 15 year old girl thrown into a world she once could only dream about. A member of Fang-Girl.net, Jane finally realizes what it is like to be a vampire.

The writing style is fresh and witty and is a long way away from the other serious vampire novels. Keeble provides her readers with an authentic voice that many readers can connect with as they travel down the bumpy journey with Jane. Who knew there could be so much humor in being a vampire?

The story balances between light-hearted and dark humor as Jane tries to figure out who is trying to manipulate her. I thoroughly enjoyed reading Fang Girl. There are a lot of great things to say, but it is hard to put in all down in a review without spoiling some of the truly enjoyable events.

Readers who want to laugh out loud and read a fresh new spin on the vampire genre will not be disapointed in Fang Girl. Highly recommended for teens and adults alike.

Overall rating
5.0
Plot
5.0  (1)
Characters
5.0  (1)
Writing Style
5.0  (1)
Already have an account? Log in now or Create an account
My Fang Girl Reveiw
May 19, 2013
Overall rating
5.0
Plot
5.0
Characters
5.0
Writing Style
5.0
Fang Girl is Fangtastic! (sorry but I just had to say that) You should make sure you don't have anything to do before beginning Fang Girl because once you start reading you won't be able to put it down. You should also prepare for uncontrollable laughter, surprised gasps, and loud cheering!

Fang Girl is the story of Xanthe Jane Greene or Jane as she prefers. An average girl with an above average interest in vampires but never really thought they were real. That is until she wakes up six feet under with fangs, clammy skin, and no heartbeat while an ominous ringtone faintly plays. (Jane's sire Lily put a phone in with her and has a ironic sense of humor) When her sire leaves a still buried Jane to lead off a vampire hunter telling her to find a place to hide for the night Jane does what any fifteen year old vampire would do. She calls her parents!

Even though Fang Girl is a more of a comedy there is a surprising amount of suspense and action including a staking, a kidnapping, a gunpoint negotiation, and several twists. The romance takes a backseat in the overall theme of Jane's story with only hints scattered throughout. Which is the only thing I only liked and didn't love. Thankfully I have heard of a sequel being written where I hope, the attraction between Van(last name Helsing) and Jane will have a bigger role.
Good Points
Everything

Kathryn Lynn Frank Top 500 Reviewer 19 reviews
Report this review Comments (1) | Was this review helpful to you? 0 0
Powered by JReviews
How to resolve AdBlock issue?
X