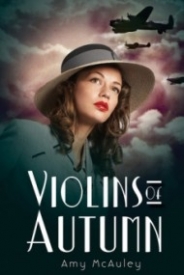 When the Germans begin bombing London in World War II, Betty is determined to do her part. Instead of running air raid drills like most girls her age, she lies about her age and trains to become a spy. Now known by her secret agent persona, Adele Blanchard, she finds herself parachuting over German-occupied France under the cover of darkness to join the secret Resistance movement. Prepared to die for her cause, Adele wasn’t expecting to make a new best friend in her fellow agent or fall for a handsome American pilot. With the brutality of war ever present, can Adele dare to dream of a future where the world is at peace and she is free to live and love of her own accord?
Tweet

Overall rating
3.7
Plot
4.0  (1)
Characters
3.0  (1)
Writing Style
4.0  (1)
Already have an account? Log in now or Create an account
Don't Read Too Soon After Code Name Verity
September 10, 2012
Overall rating
3.7
Plot
4.0
Characters
3.0
Writing Style
4.0
Violins of Autumn mines the fertile literary ground of World War II, which has a seemingly limitless number of stories to be told. The plot of Violins of Autumn follows the work of a teenage female spy in the months leading up to D-Day. While I did enjoy this novel, the timing of my reading was bad. Unfortunately, Violins of Autumn came out on the heels of another novel about a young female spy for the Brits who is captured and tortured, Code Name Verity, and I could not help comparing the two, which weakened my experience of VoA.

This novel begins, as so many do these days, with a brief into a climactic scene from the end of the novel. This technique has become exceedingly popular in YA fiction and, while it can and has been used to great effect in some cases, I maintain that it should be used sparingly. The right scene put at the beginning can create dramatic irony, keeping the reader on tenterhooks throughout the book to figure out what's going on or how the main character ended up in that situation. If this technique does not succeed, it comes off simply as a lame attempt to create additional drama, often having the adverse affect.

The opening dramatic snippet of Violins of Autumn depicts Adele's torture by the Nazis. Adele (though her real name is Betty, I prefer her spy name for her and will refer to her that way), we now know will be captured at some point, and, based on the ending of that concluding section, possibly die. Wow, really, prologue? You mean a spy might be tortured or even die? Can this be true? This felt like such an unnecessary ploy, as I already expect that sort of stuff to happen in a novel about a spy and I felt less interested knowing what was coming than if I had been waiting to find out. Plus, Code Name Verity also opens with torture, and that made comparing the two even more inevitable.

Where Violins of Autumn wins over Code Name Verity is readibility. The story is much less complicated, the characters simpler and it also doesn't make you want to weep for the rest of your life. For the reader that loved the idea of a teenage spy but could not get through Code Name Verity (and seriously no judgment for that since I nearly DNFed it too), Violins of Autumn is the book that you're looking for.

McAulay keeps the plot moving along at a steady pace. Missions and danger and Nazis abound. All of the action kept me turning the pages. While I didn't particularly connect with the characters, nor did I dislike them. Adele is capable and skilled with language, so that was awesome. She avoided making stupid mistake and proved herself much cleverer than a lot of the other spies we see in the book, though she does struggle to do so well. However, I did not care for the love triangle, which resolved in an annoying way. Adele is one of those 'I love them both in different ways' girls, which I just cannot stand. With constant possibility of death, I am all for enjoying oneself, but attraction and fear do not love make.

The ending of Violins of Autumn struck me as the weakest part of the book. I thought it too optimistic. In the chapters before the last two, some sad things happened: people died, torture, etc. Yet, in those last two concluding chapters the tone is one of unmitigated celebration. There is not one mention of the fallen comrades, and, while I don't think they should wallow, THIS JUST HAPPENED. I expected something a bit darker and more contemplative.

Looking back on my review, I see how most of my comments are negative. I want to stress that this isn't a bad book; I did enjoy it. The timing was just off. Had there been a year or two gone since I read Code Name Verity, which covers the same basic concept, I would have appreciated this much more. So, if you've read CNV, give yourself some time.

Lillian McCurry, Indie Book Haul Manager & Staff Reviewer
"When I started A Golden Fury by Samantha Cohoe, I’m not sure what I was expecting. A historical fantasy? A..."

Kim Baccellia, Staff Reviewer
"Meteor, New Mexico is the site where a meteor crashed years ago. It's also the site of the Miss Meteor..."

In the Study with the Wrench
3.0

Samantha Randolph, Promotions Manager
"After the death of the headmaster and the storm in the first book, Blackbrook Academy is barely functioning. Half the..."

Olivia Farr, Staff Reviewer
"FIVE TOTAL STRANGERS is a thrilling ride that kept me guessing. Mira is on her way to her mother's house..."

Olivia Farr, Staff Reviewer
"KINGDOM OF SEA AND STONE continues an engaging YA fantasy series with another book about sisterhood, magic, and political power...."

Olivia Farr, Staff Reviewer
"HUSH is an enthralling YA fantasy that kept me guessing all the way through. In Montane, words have particular power,..."

The Code for Love and Heartbreak
4.7