Since You Left Me 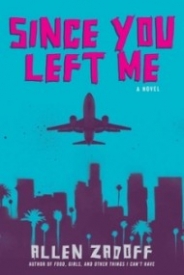 For Sanskrit Aaron Zuckerman, it isn’t easy to believe. Especially when all the people you care about leave.

His dad left after the divorce. The love of his life left in second grade. His best friend in Jewish school found God and practically left the planet. Now his yoga-teacher mom is falling in love with her spiritual guru, and she’s threatening to leave, too.

In a desperate attempt to keep his family together, Sanskrit tells just one small lie. And for a while it seems to be working. Because people start coming back. Sanskrit might even get the family he always wanted.

There’s just one little thing in his way. The truth.

Against the setting of modern-day Los Angeles, YA author Allen Zadoff presents a funny and heartbreaking novel about the search for love — and meaning — in a world where everyone is looking for something to hang on to.
Tweet

Sadder than Zadoff's usual, but still good
August 31, 2012
Overall rating
3.7
Plot
3.0
Characters
4.0
Writing Style
4.0
Sanskrit's family is a mess, and it all hits the fan when his flighty mother doesn't show up for a required parent-professor conference at Brentwood Jewish Academy. The family is already running afoul of the school; Sanskrit's divorced parents are not involved enough, and Sanskrit himself doesn't believe in God, much less in the tenants of the Jewish faith. His friend Herschel, who became very religious after a school trip to Israel, tries to keep him from completely blowing things, but can't stop Sanskrit from telling the administration, in a moment of desperation, that his mother has been in a car accident and is in the hospital in a neighboring community, in very bad health. While the Jewish community rallies around them, Sanskrit tries to keep the rest of his life from spiraling out of control. His father is too disorganized to really have much impact on the lives of Sanskrit and his sister, Sweet Caroline, and his yoga teacher mother is more concerned with her own spiritual journey than feeding her children, especially when a guru she has met on line comes from India to meet her. Sanskrit begins to realize how angry he is with the inattention from his mother, questions his beliefs even more, and works out old problems with his best friend in the second grade whom he loved, and by whom he felt dumped at a critical point in his life.

Good Points
I love Zadoff's writing. His Food, Girls and Other Things I Can't Have is very popular in my library. He's sort of like Sonnenblick on the sad parts, but not quite as funny. Very engaging, and his books are rich with details. Reminded me a bit of Paul Zindel's The Amazing and Death Defying Diary of Eugene Dingman, for no particularly good reason.

Karen Yingling, Staff Reviewer Top 10 Reviewer 1328 reviews
Report this review Comments (0) | Was this review helpful to you? 0 1
HIDDEN DEPTHS AND YOGA MATS
August 29, 2012 (Updated: August 29, 2012)
Overall rating
4.3
Plot
4.0
Characters
5.0
Writing Style
4.0
In SINCE YOU LEFT ME, the new book by Allan Zadoff, Sanskrit is confused, although at first, he doesn't seem too bothered by that. Life is confusing, parents are confusing, religion is really confusing, and so on. That's just sort of how things are, and he's resignedly, if not happily, going along for the ride. Then he tells a little lie to cover up for his flaky mother missing parent-teacher conferences, and soon things are spiraling out of control.

The spiral is what engaged me. At first, I was a little wary of a story in which the main character is named Sanskrit Aaron, and who has a sister named Sweet Caroline. Yes, like the song. Lordy, I thought. Not another wacky-name-character book. I proceeded with caution, and one eyebrow raised.

It is therefore proof of Allan Zadoff's storytelling magic that by the end, I was completely engaged in the world of the book, and I knew that of course these two people (not characters, people) were called Sanskrit Aaron and Sweet Caroline, and wasn't that just the whole mess in a nutshell? Not once did I even so much as twitch a supercilious eyebrow. I was too busy reconsidering my place in the universe.

See, Mr. Zadoff is a sneaky, tricksy writer (I say that admiringly). He sucked me in with zany chapter titles like: "An Israeli woman with large breasts is calling my name." Like I'm going to resist that. So of course, I thought I was reading a fun book. A funny book. A light-and-easy-lemon-squeezy book. And so it is, right up until the moment it isn't, and suddenly I found myself thinking about the place of the divine in the universe, and what we owe (or don't) to our family and heritage, and what being a mother truly means, and what it must be like to let go of someone you believe you can't exist without, and...and... All that and more snuck up on me, softly and gently, so that I was laid bare to it, and found myself provoked into feeling and thinking about things I wasn't expecting to confront on a summer morning. It was like Brecht, only without the utterly depressingly negative view of humanity.

WHEN YOU LEFT ME is not depressing. It is not negative. The characters are flawed, but you forgive them (much like you do your crabby Aunt Lucy, because you know it's her just her way). By the end of the book, Sanskrit is perhaps more alone, but he's also more free, and that sense of possibility is the best part of being a teenager, setting foot upon a path, not knowing what will come, but hoping it will be wonderful.
Good Points
Nutty, but believable story
Philosophically challenging, yet ultimately comforting

Francesca Amendolia Top 100 Reviewer 66 reviews
Report this review Comments (0) | Was this review helpful to you? 0 1