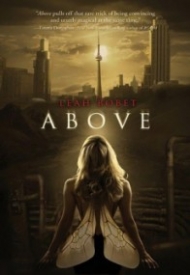 Matthew has loved Ariel from the moment he found her in the tunnels, her bee’s wings falling away. They live in Safe, an underground refuge for those fleeing the city Above—like Whisper, who speaks to ghosts, and Jack Flash, who can shoot lightning from his fingers.

But one terrifying night, an old enemy invades Safe with an army of shadows, and only Matthew, Ariel, and a few friends escape Above. As Matthew unravels the mystery of Safe’s history and the shadows’ attack, he realizes he must find a way to remake his home—not just for himself, but for Ariel, who needs him more than ever before.
Tweet

The characters were eh. The Plot was eh. And the writing was ick.

The Characters
The story is told in first person by Matthew, a boy of undetermined age, race, or ethnicity, or really anything. All we know about him is his English sucks, he's a he, and he has no living parents. That's it. That wouldn't be a bad way to start a book, but by the end we still have no idea of the physical nature of Matthew...only that he has to be under 47.
The other characters aren't that great either. I think Leah Bobet wants yo to feel sorry for Matthew's love interest, Ariel (or Ari for short), but she hardly speaks, she doesn't let Matthew hold her hands (or anything affectionate) even though he basically saves her life numerous times, and she's constantly running away. Oh, and all we really know about her physical appearance is that she has blonde hair. Which basically makes the book feel kind of awkward.

The Plot
So, basically Leah Bobet takes us on this journey of a bunch of "mythical creatures" trying to stay safe from "the whitecoats" which are just your average "we want to figure out what makes this bomb tick" kind of scientists. I'm not really sure if this was supposed to be in the future, but there wasn't a whole lot of information to go off of as far as the setting was concerned. I don't even think it was mentioned where this was. But, the characters never really fight the whitecoats off...they just hide which makes the ending not feel very satisfying. What I did like about the plot were the added in stories about the other characters.

The Writing
Matthew's broken English basically ruins the book. The narrator makes the plot confusing to understand and difficult to read. Half the time I would find myself rereading a sentence just to try and understand what he was trying to say.

In The End
The book just fell short. I didn't care about the characters. I didn't even want to, since it was so hard to understand what was going on, and the plot just didn't seem to be going anywhere.

Heather Top 100 Reviewer 75 reviews
Report this review Comments (0) | Was this review helpful to you? 0 0
Just too Weird for Me
August 28, 2012
Overall rating
2.0
Plot
2.0
Characters
1.0
Writing Style
3.0
What on this crazy, polluted planet did I just read? Seriously, I just finished reading this and I have no freaking clue. If this book were a person, it would likely end up in a straitjacket, trapped in the sorts of institutions many of its characters have been at one point or another. Mix together One Flew Over the Cuckoo's Nest and Dust Girl, and I think you've got something that roughly approximates Above.

The world depicted herein does have interesting features. For example, there are people with powers, like Jack and his lightning hands. Others are part animal, like Matthew and his scales. Some of these Freaks, those that aren't normal, have formed a community, hidden beneath the earth in tunnels, safe from the doctors and the institutions. They call their community Safe, and Atticus is their leader.

This basic premise could have made an outstanding book, but it didn't. The lack of explanation caused me to get stuck in questioning mode, unable to suspend disbelief. So far as I noticed, there was never once any sort of description of HOW society came to be this way. People don't just suddenly get born with lion feet for no reason. I'm not even asking for much. Just give me something! Really, I would have been a bit more positive towards the book had their been just a sentence telling me that these changes were the result of drugs, chemicals in the food, pollution, SOMETHING.

The character of Ariel, pictured on the book's cover, proved to be another insurmountable obstacle for me as a reader. While I can easily accept some of the curses (or so they call them) that the people of Safe possess, like wielding lightning or speaking with ghosts, I had major difficulty with the animal hybrids. Still, I could accept to some degree at least Atticus' claw hands and Matthew's dad's lion feet. Fine. Ariel, though, I could not fathom. You see, she is not precisely as pictured. She looks completely normal sometimes, entirely human. However, she can TURN INTO A BEE. Her ability differs from everyone else's greatly, and I couldn't deal with the whole conservation of matter issues. Sure, I've read books where I wasn't bothered by things like that (Harry Potter, for example), but this aspect just seemed out of place within Bobet's own world. Why was Ariel so unique?

Matthew is a meh main character, which is unfortunate, especially considering that I still found him to be the most interesting character. Everyone feels flat and I don't get a sense of any real emotion anywhere, even in the scenes that I know were meant to be gut-wrenching. Perhaps this stems from the way Bobet chose to tell the story, as Matthew's autobiography, thus creating a sense of removal from those moments?

Matthew has a momentous crush on Ariel, although it's never put into those terms. I will give the romance credit for not being remotely like any other YA romances. However, that does not make me ship them any more. Again, it's hard to root for them when I have no sense of who they really are. Ariel, especially, does not seem to much care for anyone and would probably be best off alone.

The writing teetered on the edge of dialect but, except for one brief section, remained normal enough that I didn't want to stab my eyes out with one of my stiletto heels. Her long (mostly about forty pages) chapters made my eyes cross. I was constantly flipping ahead to see how many pages of the chapter remained, and the answer was usually too many. Additionally, I did not care for the Tales told at the end of each chapter, a brief story of how some of the key characters came to be in Safe. The characters chosen seemed entirely arbitrary, with some important ones having been skipped and some we never even meet getting a section. Many of these didn't add to the book for me at all. I feel like it would have been stronger to integrate them into the rest of the text.

There were some ideas in Above that I really liked, some shining possibility from amidst the weirdness. I really wish that Bobet hadn't made this a paranormal. As an issues book set in a dystopian future with a crackdown on crazy people (like The Glimpse), this could have been so powerful. The paranormal elements detracted from the serious themes, like the abuse Ariel has suffered and the inhumane treatments perpetrated by the Whitecoats.

About all I can say having finished Above is that I didn't completely hate it. However, I have so little positive to say that I cannot even rate it a meh. Some readers surely exist who can appreciate Bobet's vision, but I am not that reader.