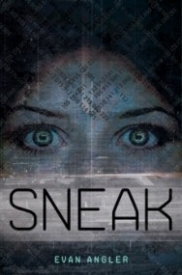 In a future United States under the power of a charismatic leader, everyone gets the Mark at age thirteen. The Mark lets citizen shop, go to school, and even get medical care—but without it, you are on your own. Few refuse to get the Mark. Those who do . . . disappear.

Logan Langly went in to get his Mark, but he backed out at the last minute. Now he’s on the run from government agents who will stop at nothing to capture him. But Logan is on a mission to find and save his sister, Lily, who disappeared five years ago on her thirteenth birthday, the day she was supposed to receive her Mark.

Logan and his friends, a group of dissenters called the Dust, discover a vast network of the Unmarked, who help them travel safely to the capital city where Lily is imprisoned. Along the way, the Dust receives some startling information from the Markless community, opening their eyes to the message of Christianity and warning that humanity is now entering the End of Days.

When the Dust finally arrives in the capital, it seems that all their careful planning is useless against a government that will do anything to bend its citizens to its will. Can the gentle words Logan has found in a tattered, banned Bible really stand against the most powerful military the world has ever known? Can Logan even sacrifice his own freedom, choosing to act through faith alone?
Tweet

Good Sequel
August 31, 2012
Overall rating
3.7
Plot
4.0
Characters
3.0
Writing Style
4.0
There are two basic methods by which dystopias nee utopias are formed: through force or through people agreeing to give up their rights in exchange for an easier life. Angler's Swipe series falls into this latter category, along with Anthem. There's something so entirely horrifying about people giving up rights in exchange for peace. Don't get me wrong: I like peace, but I like being able to be myself more.

Despite my worries, I read Swipe last year, and was pleasantly surprised. With actual dystopias somewhat thin on the ground as a broader definition takes over, in an effort to make the most of the genre's popularity, Swipe comes as a nice refreshing dose of old school dystopian. Also setting Swipe apart is the youth of the heroes. Though still a YA and not an MG, the main characters are but 13.

They are, however, a rather mature 13 for the most part. Most incongruously for their age is Erin's hacking skills. This is something that happens all of the time in fiction: young people who can outhack anyone. I just have a little trouble accepting that child of privelege Erin has picked up these skills. Where did she learn them? However, their youth does shine through when it comes to their romances. This one has less romance than Swipe because the kids are busy with other things, but they react so childishly to romantic things, which is about the only time they read as their age.

My favorite aspect of this series is how powerful the two main female characters, Erin and Hailey, are, particularly in comparison to the main male characters. Though Logan has become the figurehead of the Markless movement, he really is not good for much. Mostly he causes trouble and makes unwise decisions. The girls, though, have the talent and the cleverness to really accomplish the group's goals. You all know how much I love books where the female characters are not portrayed as weaker than the men or in need of saving.

My favorite character by far is Erin. I love her for her acerbic, antisocial nature and her brutal honesty most of the time. When Logan and Dane are missing at the beginning of school and everyone wants to know where they are, she's the kind of girl who will tell it like it is and say they aren't coming back, who wants to yell at everyone to stop pretending like they care Logan and Dane are gone when they didn't care about them when they were in school. Plus, I love that Erin isn't all good. She totally buys into the Mark and Cylis and everything. She's more complex for her imperfections and her darkness.

There are two really wonderful new elements in Sneak that were not in Swipe. First, there's the River. Following the same concept as the Underground Railroad, the Markless have formed the River. This is not an actual river, but a road along which assistance can be found for the Markless if you know how to read the signs. For example, a boat means that there's a person there to help guide you, a captain. There's another sign indicating that a person therein will give you food or a place to sleep. I loved the way he brought history back and thought it was totally authentic. There was, however, some seriously obvious plotting here, because there's a symbol that's a hook, which means, basically, "It's a TRAP!" As soon as I saw that, I knew the kids would miss seeing it and get hooked. They, of course, did. Chekhov rule.

Second, there's a literary reference which is unbelievably cool and mad props to Angler for this. He brings in Dante's Inferno. In Sneak, their whole goal is to get to this prison, Acheron, where Logan's sister is supposedly being incarcerated. Well, Acheron is modeled after Dante's vision of Hell, which was just awesome. Acheron won't be less creepy if you haven't read Dante, but, if you're familiar with the Inferno, it adds another level (or 9) of awesomeness.

Lastly, I have to talk about religion. As you may or may not know, Thomas Nelson is a Christian publisher. That was what initially gave me pause, but I found little to no religious reference in Swipe. In Sneak, I can now see why a Christian publisher would have chosen this work, but the religion remains very light. I was never annoyed by it, and I'm touchy about such things. In fact, at one point someone sneezes, and the response was 'Gesundheit' and not 'Bless you,' which seems like a little thing but indicates to me that he has no intention of shoving his views down anyone's throat.

If you enjoyed Swipe, Sneak will not let you down in the slightest. If anything, I would say Sneak is actually a bit stronger than its predecessor.

Amazing apocolyptic dystopian novel. I was on the 'edge of my seat' so to speak, as I read this incredible book. It's like the Book of Revelations for YA. I loved reading about Logan's continued adventures while looking for his sister Lily. This book is a perfect continuation of the first book in the series. I hope when the time comes, as many think it will, we will have the strength of Logan and Peck to refuse the mark and fight the system. Good vs evil. Classic story. Told in an amazing manner. Lots of twists and turns. I don't want to give away any spoilers, but the reader will never guess what is coming. It is brilliant.

Donna Lawrence Top 500 Reviewer 4 reviews
Report this review Comments (0) | Was this review helpful to you? 0 0
Powered by JReviews
How to resolve AdBlock issue?
X

Jazmen Greene, Newsletter Manager
"I feel like I've been asleep for the last 31 years and I just woke up. I am woke. ..."

The Opposite of Always
5.0

Jazmen Greene, Newsletter Manager
"Opposite of Always is a heartfelt and stunning debut; that is worthy of all praise. I am in love..."

Kim Baccellia, Staff Reviewer
"Fourteen friends who grew up together in Japantown, San Francisco find themselves and their families sent off to incarceration camps..."

Paige Cee, Staff Reviewer
"Clara Shin is the class clown and definitely qualifies as a troll too. (Big difference between the two, I'm not..."

Kim Baccellia, Staff Reviewer
"Sixteen-year-old Violet Choudhury has a huge secret. During the day she's part of her Midwestern town's cheer squad and at..."