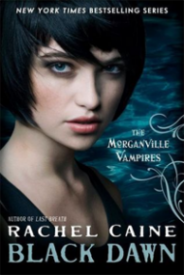 The hotly-anticipated twelfth instalment in the Morganville Vampires series... In Last Breath, the rain brought a new and dire threat to Morganville and its vampires... their ancient enemies, the draug. Now, the vampires are fighting a losing war, and it will fall to the residents of the Glass House: Michael, Eve, Shane and Claire, to take the fight to an enemy who threatens to destroy the town, forever. Lovers of Morganville, rejoice: Black Dawn takes the intrigue, romance and nail-biting suspense of the series to its highest level yet!
Tweet

Brittany Top 100 Reviewer 71 reviews
Report this review Comments (0) | Was this review helpful to you? 0 0
I thought it was impossible for things to get any more dark, eerie, and utterly frightening.
May 17, 2012
Overall rating
4.7
Plot
4.0
Characters
5.0
Writing Style
5.0
Because the moments of lightness are so rare and few, I missed that happiness and rightness shared between the characters no matter how dire the circumstance in Black Dawn by Rachel Caine. Things have been completely swallowed by the dark, and I felt as weary as the characters by the time the ending was anywhere in sight. The action isn’t the pulse-spiking exciting kind but the trembling terrified kind and I kept holding my breath waiting for tragedy to explode and consume. So many are slain by the enemies awaiting in the wet shadows that the sadness grew to be unbearable at points, and the risk-taking rapidly depletes the energy left in our stores. Despite the hopeless tone, however, the second I was back with the characters, I chose not to care, because they matter so much more.

Morganville has certainly taken a turn for the worse with eerie foes present to make both humans and vampires equally vulnerable. Everyone is on edge and all are susceptible to losing their lives, so there’s constant fear and adrenaline flying around. The relationships between Claire, Shane, Michael, and Eve are shaky at best, and there’s hurt and leftover anger to be sorted through. Even so, there is no group of friends stronger and more ready to hurl themselves at each other’s backs to defend and oppose against those that would sever them apart. No matter their differences, their wounds, the four always come through for each other and remain a family, just a family with some issues. The love is there, and it’s so deep and unconditional that, in spite of all that’s happened, it nearly feels as if nothing has changed.

Claire’s growth from book to book astounds and makes fast admirers out of us, because there’s no one that’s got it together like Claire. She’s imperfect and falls into traps and trusts the wrong people sometimes, but she always plows through and makes it out alive and whole, and keeps her friends close behind as she survives. And Shane, over the course of this series, has achieved permanent book boyfriend status. He is strong, so strong, ferocious in a fight, loyal, and unsure of the goodness that’s so prevalent inside him. He has suffered so much loss, endured so much pain, and yet, alongside Claire, he does the unmanageable and keeps his head up, shoulders back, hands tucked firmly in his friends’, his love’s, and keeps pushing forward, never bowing out no matter how hard the blows to the body and heart. Together, the two are more united, more solid, more real than any YA couple I’ve ever read, full of awkwardness and sweetness and so much heat that never loses potency even in the bleakest of circumstances.

Loyalties are heavily strained, as two enemy races must forge into one body to repel the evil that has overtaken the town, and the result is radical. Friend and foe become difficult to separate and only few can discern the difference, although not all do so in time before it’s too late. Fear drives people against each other or to act irrationally in desperation and it only worsens the cause. As Myrnin, Claire, Shane, and the rest of the gang, fight incredible odds to save the town, they do so also with a condensed time table in mind, as one of those whom they depend on for security lies in an anguished, nearly irrevocable state.

As the ending loomed nearer, I was sighing in relief and dragging my feet. I didn’t want to leave behind these characters who’ve come to mean so much to me after having waited to reunite with them for months, but the tension was pulling me down. A break was very much necessary, and yet I was vaguely dissatisfied as soon as the book was closed. Wariness has returned as speculation of what’s to happen next continues to spear my mind with questions that beg for answers only the next book can give me. I only hope that my heart won’t be broken in the end.

Originally posted at Paranormal Indulgence, 4/26/12
Good Points
After the insanity that whipped through the final pages of Last Breath, I thought it was impossible for things to get any more dark, eerie, and utterly frightening. Caine quickly dispels that notion and makes room for still more of what has been plaguing the vampire-run town of Morganville and rains down more death, destruction, and mind-screwing events on the weary, heavily scarred characters that are searching for any means of peace, and are more than determined to fight for their survival. With small bubbles of temporary lulls interspersing the story, we are able to relax only for a handful of moments before the tension and morbidly death-defying enemies come to strike and shred, and I believe that may have contributed to my lack of stupefied love for this particular installment. Even so, I was so ecstatic to be back with characters that warm and shatter my heart, with Caine’s signature writing style, which is as inviting as ever!

Asher Knight Top 100 Reviewer 38 reviews
Report this review Comments (0) | Was this review helpful to you? 0 0
Powered by JReviews
How to resolve AdBlock issue?
X