Silence (The Queen of the Dead #1) 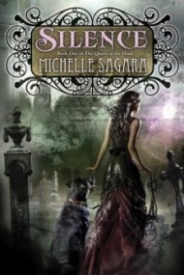 It began in the graveyard. Ever since her boyfriend Nathan died in a tragic accident Emma had been coming to the graveyard at night. During the day she went through the motions at her prep school, in class, with her friends, but that’s all it was. But tonight was different. Tonight Emma and her dog were not alone in the cemetery. There were two others there—Eric, who had just started at her school, and an ancient woman who looked as though she were made of rags. And when they saw Emma there, the old woman reached out to her with a grip as chilling as death….
Tweet

A Very Unique Paranormal
April 30, 2012 (Updated: April 30, 2012)
Overall rating
4.3
Plot
4.0
Characters
5.0
Writing Style
4.0
Silence by Michelle Sagara was such a cool read. Cool and very unique. It definitely had a Buffy-esque vibe going for it throughout the entire thing, which was certainly nice.

This was one of the most unique paranormals I've read in a very long time. It was just so neat. There was a lot of mystery mixed in, as you are figuring things out the same time as Emma, and Emma is pretty much clueless as the book begins. Michelle Sagara's ghosts were totally different from any others I've read about. The elements of how they were were cool.

My one complaint would be that a lot was left unanswered about who Emma is and what she can do. It was hinted at, but a lot was never directly said. So I am really hoping that book 2 sheds a little more light on that. There was also a bit of confusion in regards to the dead - I really would love to know more about them, as very little light was shed on that as well.

The characters are what really sold this book for me. They all rocked! Emma was a really great main character, and I loved Chase and Eric. Basically Emma's whole network for friends were super cool and nice. You can't ask for a better best friend than Allison.

The ending was perfect for the start to a series. Michelle Sagara nicely ties up this plot thread, and leaves a few more open. It was a complete story, which was a relief to read. I'm very excited for book 2, to see where Emma and her friends's story goes next.

Silence by Michelle Sagara was a super fun read! It had a slower beginning, but once it picked up I didn't want to put it down for a minute. Michelle Sagara has woven a story so intricate and unique that readers will love.

Overall rating
4.3
Plot
3.0  (1)
Characters
5.0  (1)
Writing Style
5.0  (1)
Already have an account? Log in now or Create an account
Now this may not have been a paranormal romance, but it was still full of paranormal goodness...
May 17, 2012
Overall rating
4.3
Plot
3.0
Characters
5.0
Writing Style
5.0
I am slightly disappointed that there isn’t a romance to root for, but it’s not a total letdown… *sigh* This book is more than just who the main character is going to hook up with. Silence by Michelle Sagara is sad and confusing and fascinating. Emma Hall is far from recovered—she’s resigned. After having lost her father a few years ago, then very recently losing her boyfriend, Emma has changed. She may seem more self-confident than any teenager is capable of, but it’s because she no longer cares. She isn’t concerned with other people’s views about her, as it’s so far out of her worries that she’s straightforward with what she thinks and says since none of it matters anymore. It’s heartbreaking to witness that sort of resignation, because she isn’t crying and begging and longing for her boyfriend to return to her—she understands that that’s never going to be a possibility, she grasps that he’s gone and now it’s only a matter of how long she has to wait before everything is over for her as well. She’s not suicidal nor is she depressed or moody, she’s just fine. And that’s worst of all.

The characters—her friends—have all been effected by Emma’s loss as it’s their loss as well, but it’s all wrapped up in a kind of secret. No one talks about him or tries to reminisce, and that makes it hard in a way to connect and feel that loss as keenly as they do. Yet, at the same time, because they feel so deeply, it incites wonder that such a person, one so elusive to us, influenced so many lives. As we are introduced to this loss, and what that means for Emma, there is a mystery wrapped up in recent events in Emma’s life. After a chance meeting at the graveyard during the night, Emma—or more accurately, Petal, her Rottweiler—stumbles across Eric, the enigmatic new student at her school. This meeting unravels the bad so that it quickly twists her life into something dire. Head injuries, spacing out, vomiting after hardcore headaches hit, voices—all things that Emma can’t explain but is clever enough to understand that all of it leads back to Eric.

The plot has a tendency to roll into the confusing at times, and it has to do with the way it’s written and the lack of information. This story, even as answers start formulating, is shrouded in a mystery so thick that, by the end, it feels as if we lacked the ability to see through the thin block and be taught properly. It’s an introduction, though not necessarily irritating in that quality. But it certainly leaves room for so much more to happen, and it’s nearly impossible to guess where this story line is headed because it’s likely that we’ll be wrong. The necromancer mythology is a puzzle in itself and we attain pieces but it’s like trying to make a whole picture with just a handful. It’s as if we’re reading through a paragraph and once we’re finished, we sit back and ask ourselves if we understand when the answers are as elusive as they are obvious.

I may not know where this story is going, however I do know that the characters are, besides the paranormal aspect, the very best part of the story. It’s their deep bond, the connection, and the genuine caring between them. There are no Big Secrets to withhold, there’s support, and there’s a steadiness to their friendships, as if their bond will live as long as they do.

Sagara manages to steer away from a true cliffhanger, though she wraps up her story with a fist of anticipation rearing back and ready to strike as soon as the last word is read. Something surprising consumes our focus, although it’s not enough to be left shocked and angry. It’s a good surprise because it gives us a chance to really imagine what the sequel will be like and that’s what lights the excitement, the speculating. This series is definitely going to be quite a ride!

Originally posted at Paranormal Indulgence, 4/20/12
Good Points
I had absolutely no preconceptions toward Silence by Michelle Sagara. I read the brief press release explaining the deal and thought, 'Hey, this is looks creepy fun and IT’S PARANORMAL romance with a beaut of a cover. How can I resist?' Now this may not have been a paranormal romance, but it was still full of paranormal goodness with downright pretty writing—it’s deep and insightful and simple of a kind, and characters, with their loyalty and distinct personalities, that are simply incredible. The relationship between these friends, best or otherwise, is beautiful in its honesty and the loyalty they feel toward the main character wonderful in its intensity.

Asher Knight Top 100 Reviewer 38 reviews
Report this review Comments (0) | Was this review helpful to you? 0 0
Powered by JReviews
How to resolve AdBlock issue?
X