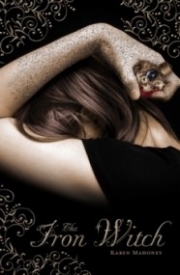 When she was seven, a horrific fey attack killed Donna Underwood’s father and drove her mother mad. Her own nearly fatal injuries were fixed by alchemy—the iron tattoos branding her hands and arms. Now seventeen, Donna feels like a freak, doomed by the magical heritage that destroyed her parents and any chance she had for a normal life. Only her relationship with her best friend, Navin, is keeping her sane.

But when vicious wood elves abduct Navin, Donna is forced to accept her role in the centuries-old war between human alchemists and these darkest outcasts of Faerie. Assisted by Xan, a gorgeous guy with faery blood running through his veins and secrets of his own, Donna races to save Navin—even if it means betraying everything her parents fought to the death to protect.

I was actually pretty disappointed with The Iron Witch. The idea the book was based on was so intriguing, and yet the book itself fell flat.

Her mother went crazy after Donna’s father died in an accident. Not a car accident. An accident caused by the fairies. And this accident has left Donna with arms made of iron. Repaired by the alchemists, her arms have made her superman-strong.

So when the fairies kidnap her best friend Navin, you’d expect her to be kick-butt strong.

She isn’t. Though strong, Donna definitely isn’t kick-butt. Being kick-butt means being smart, strong, and fearless. Donna is not smart at times. She’s pretty idiotic. (I’d love to give examples as to why she’s so incredibly stupid, but that would take paragraphs.) And though she has strong down, she is not fearless.

And whereas Donna annoyed me so much, Xan was a relief. Xan is definitely one of those hot boys that you can’t help but swoon a little bit over (yes, I have a mild crush on him), but he’s also pretty fearless. More than Donna, at least. And though Xan sort of has a “haunted past,” there’s also something about Xan that makes him pretty special. That something is the part that I made white in the synopsis. Because it’s obviously a spoiler.

And Navin? Oh, I love Navin. Although I’m Team Xan without a doubt, Navin is awesome. Because he’s her best friend and one of the only people she cares about. He’s Indian, too, which definitely gives him bonus points in my mind, purely because I love nerdy best friends.

I don’t know if Karen Mahoney plans to make a love triangle with Donna, Xan, and Navin in it; but frankly, I don’t really believe Donna deserves to have two boys after her. (Yes, I don’t like Donna that much.) I’d say Xan and Navin were the only things that kept me reading this book. Because I just love hot boys and Indian best friends.

Things I’d like to say about the book? These are only minor details, but I still feel that I should voice my thoughts.

I’m a grammar Nazi (though I write pretty casually in my reviews). I’m pretty sure that I’ve already established that several times. Anyway, the writing in this book was decent, but I did reach this one sentence that had me gaping in horror. “Who’d’ve thunk it?” Seriously? “Who’d’ve”? I slightly understand that one because this word has become slang among teenagers these days, but then “thunk”? THUNK? I am incredibly sad now.

Another thing. Navin’s parents let Navin and Donna stay in a bedroom with no supervisors. Though that might seem pretty normal to you Americans, I’m not used to that. Remember, I’m Chinese? Chinese and Indian parents are pretty strict with schoolwork and dating. Yes, so that’s just a little bit hard to believe that they could stay in Navin’s bedroom for a pretty long time without supervisors. Even if Navin’s parents trusted both of them enough, it’s just too outrageous for my ears to believe. I know it was necessary for the book because Donna had to tell Navin some important things, but still. Highly improbable.

And lastly, this is the thing that bothered me most about the book. The ending is so sudden. It’s pretty much an anticlimax. All of a sudden, Donna tells us in a sort of epilogue (spoiler!) that she’s going on trial. Wow. It’s like, “Oh, hey, I’m going on trial! See you in the next book!” I practically forgot that she was even going to trial. That bad.

Linda Top 500 Reviewer 34 reviews
Report this review Comments (0) | Was this review helpful to you? 0 0
Mediocre at best
June 12, 2012
Overall rating
2.0
Plot
2.0
Characters
2.0
Writing Style
2.0
I am fortunate enough to be able(for the most part)to enjoy a book despite cliches and a few eye-roll inducing lines and scenes. Iron Witch was a mediocre book, for the most part, but it still held my interest and left me wanting to read the sequel. It has huge potential to become extremely good, which I look forward to. Donna was an interesting character, who is not about to let the guys do all the work, which I enjoyed(she also gave in to girlish behaviors, which to me made her seem more realistic) though what is it with the heroines in books about faeries having names that start with a D! Deirdre in Ballad and Dana in Glimmerglass, and now Donna, I don't mind but I think it's humorous. Xan and Navin on the other hand are basically copies of pretty much every "best friend who falls in love with the girl vs. new mysterious guy who falls in love with the girl" which annoyed me, though there is still a chance that Navin won't fall in love with Donna, and a certain scene at the end of the book made me question my thoughts on this, so there is still hope that this won't happen, fingers crossed! Still, despite a few annoyances I enjoyed the book and am especially eager to learn of the corruption within the Order, and what's going to happen. I love it when neither side is "good" it'll be great to see how Donna deals with things and what will happen and what is happening that the Order is hiding!

Hope Top 100 Reviewer 43 reviews
Report this review Comments (0) | Was this review helpful to you? 0 0
Powered by JReviews
How to resolve AdBlock issue?
X