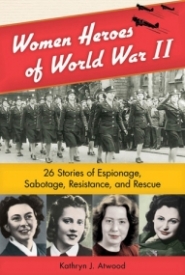 As Georges Loustaunau-Lacau, owner of the magazine Lordre national remarked to Marie-Madeleine Fourcade, when asking her to organize a massive French spy network that later came to be known as Noahs Ark, Who will ever suspect a woman? In fact, such underestimation of womens ability helped to bring down the Nazi regime, as, especially at the start of World War II, the fascist supremacists overlooked what damage women could cause to their overwhelming militaristic might. That women made a major contribution to winning the War for the Allies is undeniable, and Women Heroes of World War II: 26 Stories of Espionage, Sabotage, Resistance, and Rescue explains how.

Kathryn Atwood proves herself to be a storyteller and historian of note, as she provides an overall account of the War, as it was waged on the Western Front, before giving a country-by-country overview of the progress and impact of the War, covering Germany, Poland, France, the Netherlands, Belgium, Denmark, Great Britain, and the United States. After contextualizing the setting that gave rise to the exploits of the heroines that Atwood describes in Women Heroes of World War II, the author describes the contribution made by each hero to the war effort. The strength and resilience of such well-known figures as Josephine Baker and Marlene Dietrich are paralleled with those of lesser-known women, who fought with as strong a will and determination to defy evil, no matter the odds. That they did so at great danger to life and limb is clearly shown, making them ideal role models for young and aspirant women who, although they might not have to fight against such horrors as Kristallnacht (Crystal Night, or the Night of Broken Glass), nevertheless have frequently still to overcome social stereotyping and discrimination at school, college and beyond.

Women Heroes of World War II: 26 Stories of Espionage, Sabotage, Resistance, and Rescue reads like a fast-paced and well-written action novel. In addition to being extremely well-researched and informative, because it presents a comprehensive picture of the War from ground level up, as well as providing an overview of the War at both national and international level, the work is ideal background reading for history learners, especially from middle school level up. The book is so exciting that it is sure to lure many a learner away from the Internet, which, as we all know, is not always the most reliable source of information for school and college projects. Even so, each chapter ends with a short bibliography listing a few books and websites to which students can turn if they wish to read further (and I can almost guarantee you, they will). Women Heroes of World War II is a memorable work that should find a home in all resource centers and libraries dedicated to serving the interests of the youth.