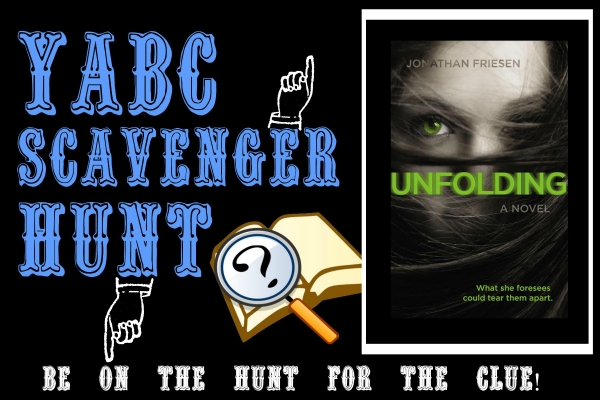 Today we’re excited to share Jonathan Friesen’s interview about his new novel, Unfolding as part of the YABC Scavenger Hunt! Read on for more about Jonathan, his novel, and an extra giveaway! And don’t forget to answer the question from this post on the Scavenger Hunt form for a chance to win the Grand Prize!

JONATHAN FRIESEN: Unfolding came after a chance encounter with an inmate. I was speaking at a prison, and following my talk, a young man broke down and told me all he had ever done. It was quite a list, but it was also clear he had been holding in these secrets for years. I started wondering how many other secrets were locked up in that prison. The idea that prison locks up more than people, it locks up secrets, becomes the starting off point in Unfolding.

JONATHAN FRIESEN: The main character, Jonah. And not just because he is the lead. Jonah has epilepsy, as do I. It was one of the most challenging struggles I had while a teen. By giving Jonah the most painful part of myself, I found myself connected to him in a way that I rarely connect to a character. I think that comes out in the reading!

JONATHAN FRIESEN: The novel. We tried on several titles, and initially I liked many more than Unfolding. Oddly enough, I have had readers say that the title is a perfect match. The story unfolds in layers like an onion, making Unfolding the right title after all.

JONATHAN FRIESEN: There’s a scene where Jonah is about to undergo his first surgery. He is sitting with a support group of teens as part of his hospital treatment plan. That scene became so real to me. What he was thinking. What he was dreading. And of course, the horrid thing that happens during the meeting. The scene wrote itself, and I just typed and cried. Those moments are why I love writing.

JONATHAN FRIESEN: Be honest. If I write from an honest place, and I try to craft characters who are true to themselves, then that is all I can do. Not everyone will love every story. But no matter what a reviewer may think, if I write honestly, I can look back and know that I wrote with all the emotion and sincerity that I owned. I can let go of bestselling or non-bestselling status. The outcome is out of my control.

JONATHAN FRIESEN: Jonah has a seizure in a church. I recall that being a fear of mine. Sitting there, crunched on a pew, and suddenly I’m hurled to the floor in front of all these people I know. Worse yet, Jonah’s seizure occurs during a funeral service. So, he is the funeral thief, stealing the show from the deceased. All the embarrassment I felt when I had seizures in awkward places flooded back and made that a very tough scene to write.

JONATHAN FRIESEN: Does anyone say revising? Maybe somebody likes that. I love the discovery of the drafting stage. The raw emotion of it. I love feeling caught off guard. For me, drafting is where the joy is.

JONATHAN FRIESEN: I have two. I have an uncanny sleep skill. If I need to take a nap, I can anytime, anywhere. Minutes before a huge talk? No problem. Sitting up? Easy. Three hours on a Saturday? A cinch. Coffee can’t mess it up. Outside, inside, in public; it’s all good. Day or night. You have never seen a more confident sleeper. My second power is equally as useless. According to my kids, I am the best dabber they have ever seen, which is a feat for an “old guy.” They say some people just have it, and I guess I do. I’m probably also the best sleep dabber, but I don’t know about that for sure.

JONATHAN FRIESEN: The Epilepsy Foundation and the Tourette Syndrome Association both are dear to me. I know what it is like growing up with these conditions and the challenges that arise. Anytime I can help, I want to help. Jonathan Friesen is an author, speaker, and youth writing coach from Mora, Minnesota. His first young adult novel, Jerk, California, received the ALA Schneider Award. When he’s not writing, speaking at schools, or teaching, Jonathan loves to travel and hang out with his wife and three kids.
Meet Unfolding! Jonah wishes he could get the girl, but he’s an outcast and she’s the most perfect girl he knows. And their futures seemed destined to fork apart: Jonah’s physical condition is debilitating, and epileptic seizures fill his life with frustration. Whereas Stormi is seemingly carefree, and navigates life by sensing things before they happen. And her most recent premonition is urging her to leave town.

When Stormi begs Jonah for help, he finds himself swept into a dark mystery his small town has been keeping for years. And the answers Stormi needs about her own past could possibly destroy everything Jonah has ever known—including his growing relationship with Stormi herself.

One winner will receive a signed hardcover of Unfolding ~ US only

**And for a chance at the YABC Scavenger Hunt Grand Prize,
continue to the OFFICIAL ENTRY FORM. When completed, submit your entry by clicking the Rafflecopter post below.

You are here: YABC Scavenger Hunt: Unfolding, Plus Author Chat with Jonathan Friesen, and Extra Giveaway!