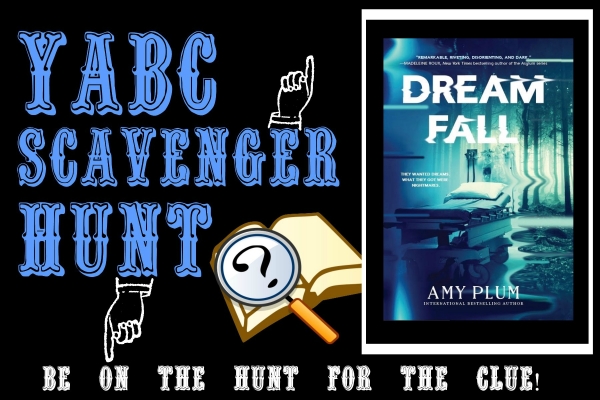 Today we’re excited to share Amy Plum’s interview about her new novel, Dreamfall as part of the YABC Scavenger Hunt! Read on for more about Amy, her novel, and an extra giveaway! And don’t forget to answer the question from this post on the Scavenger Hunt form for a chance to win the Grand Prize!

AMY PLUM: I got the inspiration for this book from the story for a children’s picture book that I wrote but never published. (I know…horror for young children? I’m twisted.) I started with the idea of teenagers whose reality was reversed: their dreams were their real life and the real world only a dream. Then I had to figure out what would throw them into such a state…they had to be dreaming most of the time. I figured some sort of medical experiment might be able to create such a situation, but what would it be treating? And then it came to me…insomnia! I’ve had enough insomnia in my life to know that if it is prolonged enough, it is in itself a nightmare. And when I found out that the brain finishes myelination around age twenty, I had my reason for it to be teenagers who would be the focus of the test, the experiment only being able to be effective before the frontal cortex had finished that process. Otherwise, the Matrix was a big influence in the architecture of the Dreamfall—the alternate reality the teens are living in.

AMY PLUM: This is always the hardest question to answer. ALL of the characters are my favorite! Don’t ask me to pick which of my children I love the most. 🙂

But I’ll tell you about one who is very special to me. Jaime is a pre-med student on full-ride academic scholarship, having been raised in a super-rough part of Detroit. The thing that’s different about this character is that I never reveal their gender. I didn’t even let myself think of Jaime as a boy or a girl. My daughter begged me to tell her…just her…which Jaime was, and I said, “I don’t even know that myself!” “But you have to know!” she pleaded. “I won’t let myself know,” was my answer.

Jaime is an experiment in reader expectations…half of my Beta readers thought Jaime was a boy and half a girl, so I felt like I had succeeded. Because just how important is gender, anyway? And which is more important—what the author wants you to think, or how the reader interprets the characters and the story in their mind? The fate of the sleepers depends on Jaime, who will have to risk everything to save them.

But then there is the dreamy (no pun intended) Fergus, who suffers from narcolepsy. There is Cata, who suffers PTSD from her violent childhood. Ant who is…just Ant. Quirky, strange, and super-intelligent. George who is kick-ass and funny. BethAnn who is trying to overcome overwhelming guilt over her part in her sister’s death. Sinclair, the spoiled rich kid with moviestar looks. And Remi, who was the only member of his family to survive a genocide. They all have enormous problems to overcome, and you should see how that plays out in their nightmares!

AMY PLUM: I wanted the title Evernight, but it had been taken a few years ago by the awesome Claudia Gray. So I worked with my editors on a list of alternate titles, and we finally narrowed it down to Dreamfall, but not until the book had already been written.

AMY PLUM: The scene I’m most proud of? It might be the buried-alive with corpses scene. Because it was so freaking scary that I couldn’t even believe I was writing it. There was one point where my editor said, “Do we really have to get that gross?” And my response was an unequivocal YES!!! This is horror! It’s the only time you’re allowed to get cringe-worthily gross, so don’t skimp on the grossness. Go full-out shocking!

AMY PLUM: I absolutely love the cover. For one thing, the color of blue is just perfect. Blue comes into the story repeatedly: it’s the color of the door they have to pass through to get from The Void to the nightmares. And as soon as people see the hospital bed, they’re scared. But I love the way the cover artist, Jenna Stempel, morphs the hospital room into the woods in one of the dreams. And you should see how she continued this theme with the cover of Book 2 (NEVERWAKE). Nothing less than amazing!

AMY PLUM: My favorite book in 2015 was B.T. Gottfred’s The Nerdy and the Dirty. It is an absolute jewel of a book, and had me laughing out loud in so many places. I know I’m in love with a book when I can’t stop thinking about the characters afterward.

AMY PLUM: What’s up next? Revising the sequel to DREAMFALL, NEVERWAKE. Which is twice as scary as Book 1. For once, I can’t wait to get my edits back from my editor because I can’t wait to revisit the Dreamfall universe!

AMY PLUM: Cata’s scenes including her background were hard to write. I drew heavily from my own childhood for her back story. I too had a violent childhood, and use everything from the spooky Antebellum house we lived in to the horrific dreams I had as a teenager to the razor strap my father used to beat me with. It was an exercise in redemption in a way…in purging the past, because I let Cata do what I did not: she told outsiders what was going on and got taken away from the situation by child protective services. As an adult and a writer, I was able to save Cata in a way that I couldn’t save myself, and though it was hard to dig that stuff up, I definitely found some healing in it. What some people don’t realize about horror: real life is can be as horrible, if not worse, than fiction. Amy Plum is the author of the internationally bestselling DIE FOR ME books, a YA series set in Paris, which has been translated into thirteen languages. She followed that with the AFTER THE END series, a faux-post-apocalyptic action adventure duology. The first book of her YA horror duology, DREAMFALL, will be released by HarperTeen in 2017.

Amy grew up in Birmingham, Alabama before venturing further afield to Chicago, Paris, London and New York. An art historian by training, she can be found on most days either daydreaming or writing (or both) in a Parisian café. A Nightmare on Elm Street meets The Matrix in this gripping psychological thriller from international bestselling author Amy Plum. Seven teenagers who suffer from debilitating insomnia agree to take part in an experimental new procedure to cure it because they think it can’t get any worse. But they couldn’t be more wrong.

When the lab equipment malfunctions, the patients are plunged into a terrifying dreamworld where their worst nightmares have come to life—and they have no memory of how they got there. Hunted by monsters from their darkest imaginations and tormented by secrets they’d rather keep buried, these seven strangers will be forced to band together to face their biggest fears. And if they can’t find a way to defeat their dreams, they will never wake up.

One winner will receive a signed hardcover of Dreamfall. US only.

**And for a chance at the YABC Scavenger Hunt Grand Prize,
continue to the OFFICIAL ENTRY FORM. When completed, submit your entry by clicking the Rafflecopter post below.

You are here: YABC Scavenger Hunt: Dreamfall, Plus Author Chat with Amy Plum, and Extra Giveaway!