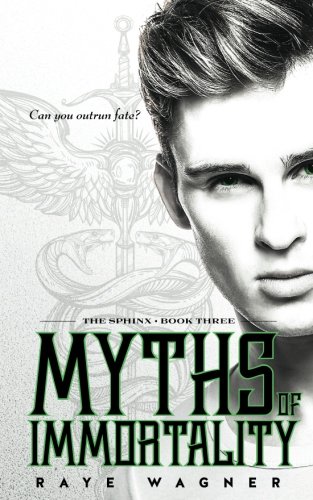 Don’t miss out on these fantastic reads, available in the Kindle Unlimited libraryand for purchase on Amazon.com.

Myths of Immortality (The Sphinx) (Volume 3)

No one is allowed to love her, except the god who cursed her…

In the realm of the dead, there are no lies.

Hope Nicholas is desperate to believe that the truth will set her free from the bindings of Apollo’s curse and allow her the freedom to choose who to love. But to get the truth, she must travel to the Underworld, a feat near impossible for the living. The gods there have their own agendas and, forced to forge alliances with the most unlikely allies, Hope will find that death is not the worst torment of the Underworld.

Athan Michael spent months chasing Hope, only to have her disappear once again. And when he discovers her destination, he knows the treacherous journey to the Underworld is one he cannot take alone. Forced to put aside his past with Xan and Dahlia, the three demigods embark on their own quest. But the past will not stay buried, and Athan must decide how much he’s willing to sacrifice to help Hope break the curse.

Teeth of the Gods

Her world is unraveling – and she’s the reason why.

Adventurous Tylira is trapped in a life she didn’t choose and destined to be chained to an enemy general.

When she is summoned to Al’Karida she knows two things will happen: she will witness the beginning of the race for the Teeth of the Gods, and she won’t be one of the racers.

Or will she? Because Tylira isn’t exactly the kind of girl who listens to other people’s advice. She thinks she can figure out her own way to tap into her potential, and the race is just a bit too tempting to resist.

Can Tylira escape the future everyone else wants for her or will she destroy everything in her attempt to be free?

Start Reading Teeth of the Gods

(Return of the Darkening Book 1)

Sebastian Smith has long been ashamed of his drunken father and poor upbringing, but then he’s chosen to train as a Dragon Rider at the prestigious academy. Thrust into a world where he doesn’t fit in, Seb finds a connection with his dragon that is even more powerful than he imagined. Soon, he’s doing all he can to succeed and not embarrass his new partner, Thea.

High-born Agathea Flamma intends to bring honor to her family by following in her brothers’ footsteps and taking her rightful place as a Dragon Rider. With her only other option being marriage, Thea will not accept failure. She’s not thrilled at her awkward, scruffy partner, Seb, but their dragon has chosen, and now the unlikely duo must learn to work as a team.

When Seb hears rumors that an old danger is reemerging, he and Thea begin to investigate. Armed only with their determination and the dragon they both ride, Thea and Seb may be the only defense against the Darkening that threatens to sweep the land. Together, they will have to learn to work together to save their kingdom…or watch it fall.

Nicole Cassidy is a witch descended from the Greek gods… but she doesn’t know it until she moves to a new town and discovers a dangerous world of magic and monsters that she never knew existed.

When the Olympian Comet shoots through the sky for the first time in three thousand years, Nicole and four others — including mysterious bad-boy Blake — are gifted with elemental powers. But the comet has another effect — it opens the portal to another dimension that has imprisoned the Titans for centuries. After an ancient monster escapes, it’s up to Nicole and the others to follow a cryptic prophecy in time to save the town… and possibly the world.

Incredible powers. A world in danger. A girl humanity should fear…

Cate was always different. Five years of witness protection has made her an outcast. When the world and everyone except her seem to freeze at the bus stop one day, she feels more alone than ever.

As she tries to understand what’s happening, a group of teens appear out of thin air, lift the bus over their heads, and disarm a bomb placed underneath it. They seem surprised she can see them as they disappear once again.

After the mystery teens show up at her school the next day, Cate is drawn into a world of time travel and magic she never thought possible. It turns out she has powers of her own, but only she can decide whether she uses them for the forces of good or world-altering evil…

Girl of Fire: The Expulsion Project Book One

ORIGIN. DESTINY. FATE. How far would you go to unravel the truth?

Trattora is the adopted daughter of the Chieftain on a primitive frontier planet. Velkan is an indentured serf who has never known a day of freedom. Forced to flee a terrifying invasion by Galactic Pirates, they find themselves thrown together on a ramshackle mining vessel that harbors more than one dark secret. Fate and chemistry combine when the pair’s matching birth bracelets lead them to a shocking discovery about their true lineage. Stakes rise when they uncover the classified Expulsion Project, and the devastating sacrifice their birth families made to spare their lives. Determined to save them from liquidation, Trattora and Velkan plunge headlong into a frantic race against time and space to take down the genocidal self-actualizing software that now controls large swathes of their home planet.

But will they navigate the treacherous dealings of the seedy Galactic underworld in time to rescue the families who loved them enough to let them go?

After the sinking of a cargo ship, a solitary lifeboat remains bobbing on the wild blue Pacific. The only survivors from the wreck are a sixteen-year-old boy named Pi, a hyena, a wounded zebra, an orangutan—and a 450-pound royal bengal tiger. The scene is set for one of the most extraordinary and beloved works of fiction in recent years.

Heather Reiner has always felt like an outsider. And she doesn’t have a normal afterschool job, either. That’s because she’s got amazing psychic abilities that help the police, well, mostly Detective Tanner, track down dangerous criminals.

Heather has no choice but to embrace her gift of second-sight when her visions take a dangerous turn by revealing a government corruption. And if that weren’t bad enough, Heather learns that a local college student is missing, too.

When Heather tells Detective Tanner about her psychic intuition, he asks for her help solving the two seemingly unrelated cases. Yet the hostile police chief is convinced she’s a major fraud, and Heather doesn’t trust him.

With the help of Tanner and her hot new boyfriend, Heather decides to stop the criminals before they set their diabolical plan into motion. Unfortunately, this also makes her a prime target. But nothing could’ve prepared Heather for what she’ll have to face if she hopes to solve the mystery, or the potentially fatal consequences if she doesn’t…

Cue Happily Ever After.

That’s how the story goes, right?

Except this is Lucy. The same Lucy whose stellar driving skills single-handedly wiped out both of her parents, leaving her with nothing but the suitcase in her hand and the screws in her skull. Not to mention that Mr. Tall, Dark, and Handsome—AKA Oliver—is just as annoyingly bossy as he is hot. According to Oliver, Lucy’s not safe in her new hometown, but he refuses to say why. He just gives her some lame warning about not going out after dark, like that’ll stop her.

When several townspeople vanish, the lethargic community springs to life, fearful of the danger lurking among them. The problem is that Lucy’s the last person to have seen any of the missing. Doesn’t exactly qualify her for the Neighbor of the Year Award.

Lucy’s already given up on Happily Ever After, but now she has two choices left: find out what’s happening in her new home, or become the next victim.

Start Reading In the Middle

You are here: What’s Hot in Kindle Unlimited