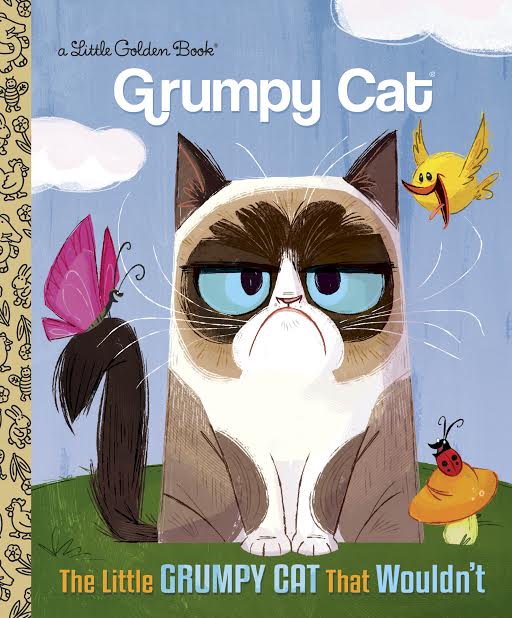 In just three years, Grumpy Cat has become known around the world, with 8 million Facebook followers (facebook.com/TheOfficialGrumpyCat), her own TV movie, two New York Times bestselling photographic books, and a “spokescat” role with Friskies. Grumpy Cat has been featured on the cover of New York magazine, the front page of the Wall Street Journal, and the cover of People.

“We look forward to introducing Grumpy Cat, who has captured the hearts of young and old, to the iconic Little Golden Books line,” said Angelilli. “Bringing together these two popular brands, one steeped in history and one a pop-culture phenomenon, is a truly exciting marriage of past and present.”

“The Grumpy Cat Little Golden Books will be the cutest books ever. It’s going to be awful,” said Grumpy Cat.

The first Little Golden Book, THE LITTLE GRUMPY CAT THAT WOULDN’T, to be released on July 26, 2016, features illustrations by Stephanie Laberis. In the story, Grumpy Cat’s friends and admirers try to get her to try new things and have fun, and each time she is even more resolved to say NO. In the end, she is right. Having fun is awful.

Publication dates for the additional two Little Golden Books will be announced.

Stephanie Laberis has loved drawing for as long as she can remember and was raised on a healthy diet of cartoons, video games, and getting muddy in the New England woods. She attended RISD and has a BFA in illustration, and she enjoys working in many artistic fields—illustration, character design for animation, and toy design. She works out of her home studio in the San Francisco Bay Area.

In just over three years, Grumpy Cat has become the most famous cat in the world. She has starred in her own movie, Grumpy Cat’s Worst Christmas Ever, is the author of three bestselling books, has an ever-expanding merchandise line, and has 10 million online followers and growing. When she’s not attracting adoring crowds or scowling with celebrities on the red carpet, she spends her time napping and playing with her brother, Pokey, in Arizona.

THE LITTLE GRUMPY CAT THAT WOULDN’T

You are here: The Grumpy Little Cat That Wouldn’t–Press Release