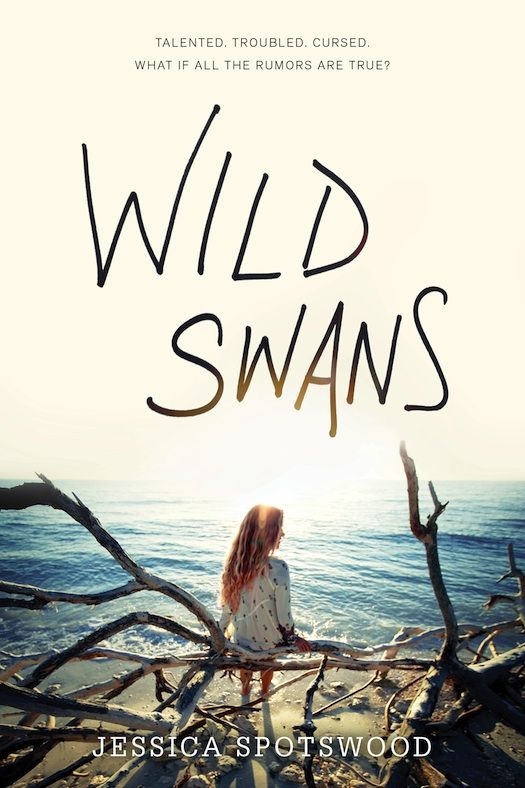 Today we’re spotlighting Jessica Spotswood’s novel, Wild Swans. Read on for more about Jessica, her novel, an excerpt, plus a giveaway! Jessica Spotswood is the author of the Cahill Witch Chronicles. She lives in Washington, DC, with her husband, and works as a children’s library associate, with her husband. Visit jessicaspotswood.com. Will Ivy fulfill her destiny as a dazzling Milbourn woman? Or will the pressure from her family cause her to crumble?

The summer before Ivy’s senior year is going to be golden—all bonfires, barbeques, and spending time with her best friends. For once, she will just get to be. No summer classes, none of Granddad’s intense expectations to live up to the family name. For generations, the Milbourn women have lead extraordinary lives—and died young and tragically. Granddad calls it a legacy, but Ivy considers it a curse. Why else would her mother have run off and abandoned her as a child?

But when her mother unexpectedly returns home with two young daughters in tow, all of the stories Ivy wove to protect her heart start to unravel. The very people she once trusted now speak in lies. And all of Ivy’s ambition and determination cannot defend her against the secrets of the Milbourn past…

Granddad says all the Milbourn women are extraordinary.

Amelia, the Shakespeare professor up at the college, says cursed.

Judy, the bookseller down at the Book Addict, says crazy.

Here in Cecil, girls are still expected to be nice. Quiet. All sugar. Maybe a little spice.

But not us. We Milbourn women are a complicated lot.

The Milbourn legacy goes back four generations. Folks were just starting to drive over from Baltimore and Washington, DC, to buy my great-great-grandmother’s portraits when she tried outracing a train in her new roadster. It stalled on the tracks and she and her two youngest were killed instantly. My great-grandmother Dorothea survived and went on to win the Pulitzer Prize for her love poems-but she was murdered by the woman whose husband she’d been sleeping with for inspiration. Grandmother painted famous, haunting landscapes of the Bay, but the year before I was born, she walked out the back door and down to the water and drowned herself. My mother had a voice like a siren, but she ran away from home the second time she got knocked up, and we haven’t seen her since.

And me? I don’t feel crazy or cursed. But I’ve grown up in this house, haven’t I? So I don’t know. Maybe there’s no escaping it.

I’m home alone tonight, and a storm is sweeping up the Bay. Through the open french doors I can hear the waves crashing against the shore. They make a frantic shh-shh, like a desperate mama rocking a colicky baby.

I hear mothers do things like that, anyhow. I wouldn’t know.

I’ve been reading Jane Eyre for about the twelfth time, but I set it down on the coffee table and leave the warm lamplight to go stand in the doorway. The wind catches at my hair and flings it back in my face. I push it away and squint down at the beach.

Lightning hasn’t split the sky yet, but I can taste it coming. The air’s so thick I could swim through it.

Jesus, but a swim right now would be delicious. I imagine tearing off my blue sundress, running down the sandy path, and diving right into the cool waves of the Chesapeake. I could swim almost before I could walk. Part fish, Granddad says. But he doesn’t like me to swim by myself. Says it isn’t safe, especially for a girl, alone and at night. That’s one of his rules. He’s got about a million. Some of them I fight; some I just let be. Given how his wife killed herself, it seems reasonable enough to humor him on this.

Behind me, something rattles in the wind and I startle. Goose bumps prickle my shoulders in spite of the heat. Lately it feels like a storm’s coming even when the sky’s blue. Like spiders crawling through my veins.

My friend Abby tells me I need to quit worrying and relax. It’s going to be golden, this summer before our senior year. There will be barbecues and bonfires and lazy days volunteering at the town library. She doesn’t believe in family curses or premonitions of doom. Her family has its own troubles, but they’re not town lore.

My friend Claire says “f*** the family curse; you’re your own woman.” Claire’s all rebellion and razor-sharp edges-especially since her dad had an affair with his secretary and moved out (such a cliché). Claire doesn’t believe in fate; she believes in making choices and owning them.

But she’s not a Milbourn girl.

The rain starts with a fury. It pelts the windowpanes and drums against the flagstones out on the patio. The wind picks up too, sending the gray curtains spinning into the room like ghosts. I pad back toward the sofa, trailing my fingers across bookshelves stacked with Great-Grandmother Dorothea’s prize-winning poetry. All along the walls hang Grandmother’s landscapes-our pretty Eastern Shore transformed by twisting rain clouds. She only painted hurricane weather.

They were all so talented. Troubled, sure. But look at their legacy.

What will mine be?

Granddad’s had me in all kinds of classes: piano, flute, ballet, gymnastics, oil painting, watercolors, landscapes, portraits, creative writing… I threw myself into every new subject, only to be crushed when I didn’t show a natural aptitude for any of it.

I’m on the swim team, but I’m never going to be an Olympic athlete. I’m an honors student, but I won’t be valedictorian. Sometimes I write poems, but that’s just to get the restless thoughts out of my head; my poems have never won any awards. I am completely, utterly ordinary.

Granddad won’t give up; he thinks there’s some bit of genius hiding in me somewhere. But over the last couple months… Well, I’m getting tired of trying so hard only to end up a disappointment. Maybe that’s not how this works. Maybe whatever spark blessed or cursed the other Milbourn girls skipped a generation.

To hear people in town talk, the women in my family weren’t just gifted; they were obsessed. And those obsessions killed them, three generations in a row. Maybe four. For all I know, my mother could be dead now too. Do I really want to continue that tradition?

Outside, thunder growls. Inside, something rattles. I stare up at the portrait of Dorothea as it twitches against the exposed brick wall. Just the wind, I reassure myself. There’s no such thing as ghosts.

Dorothea was fifteen when her mother painted her. She wears a royal-blue shirtdress and matching gloves, and her hair falls in short brown curls around her face. She wasn’t what you’d call pretty-too sharp featured for that-but there’s something captivating about her. She stands tall in the portrait, shoulders back, lips quirked. It’s not quite a smile. More like a smirk. A year later, she’d survive the collision that killed her mother and sisters. Her broken leg never healed quite right, Granddad says; she walked with a limp the rest of her life.

Lightning flashes. The lamp flickers. Rain is puddling on the wooden floor. I should close the doors, but Dorothea’s eyes catch mine and somehow I don’t want to turn my back on her portrait.

There’s no such thing as ghosts, I remind myself.

Then the room plunges into darkness. 3 thoughts on “Spotlight on Wild Swans by Jessica Spotswood, Plus Giveaway!”

You are here: Spotlight on Wild Swans by Jessica Spotswood, Plus Giveaway!