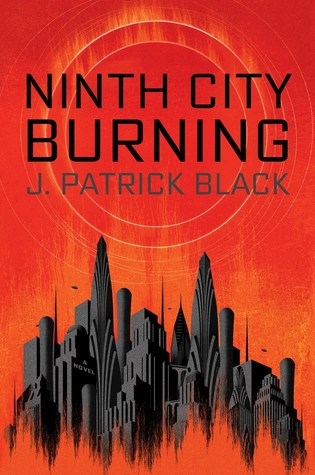 Read on for more about J. Patrick Black, his novel, plus a giveaway!

Ace is thrilled to present NINTH CITY BURNING—the first book in an epic science fiction series from debut novelist J. Patrick Black—which is gearing up to be one of the most buzzed about new releases this fall! EW.com recently ran a cover reveal of NINTH CITY BURNING with a short, exclusive excerpt. Once you read it, I promise you’ll be as hooked as we are! J. Patrick Black has worked as a bartender, a small-town lawyer, a homebuilder, and a costumed theme park character, all while living a secret double life as a fiction writer. While fiction is now his profession, he still finds occasion to ply his other trades as well. He lives in Boston, Massachusetts, where he likes to visit the ocean. NINTH CITY BURNING is his first novel. Find out more about J. Patrick Black online at www.jpatrickblack.com Centuries of war with aliens threaten the future of human civilization on earth in this gripping, epic science fiction debut…

We never saw them coming.

Entire cities disappeared in the blink of an eye, leaving nothing but dust and rubble. When an alien race came to make Earth theirs, they brought with them a weapon we had no way to fight, a universe-altering force known as thelemity. It seemed nothing could stop it—until we discovered we could wield the power too.

Five hundred years later, the Earth is locked in a grinding war of attrition. The talented few capable of bending thelemity to their will are trained in elite military academies, destined for the front lines. Those who refused to support the war have been exiled to the wilds of a ruined Earth.

But the enemy’s tactics are changing, and Earth’s defenders are about to discover this centuries-old war has only just begun. As a terrible new onslaught looms, heroes will rise from unlikely quarters, and fight back.

One winner will recieve an ARC of Ninth City Burning (US only).

3 thoughts on “Spotlight on Ninth City Burning by J. Patrick Black, Plus Giveaway!”

You are here: Spotlight on Ninth City Burning by J. Patrick Black, Plus Giveaway!