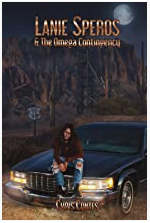 Read on for more about Chris, his book, and a giveaway. 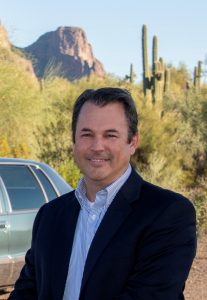 Seeking a more upbeat, fast-paced reading experience for his young boys, Chris Contes began fiction writing later in his career—at age 45. With years of history in the automotive and theme park industries, Chris taps a diverse and eclectic range of work experiences that share a common thread—a love of making a day job out of his passions. His background also provides an engaging and technically accurate source for unique scene setting and storytelling. An avid fiction reader himself, Chris gravitates toward stories that are motivating, energetic, and faithful to technical details.
Chris has a business degree from Arizona State University and spent ten years working at automotive test facilities for General Motors and Nissan. In 2005, he followed his dream and left the auto industry for a behind-the-scenes career leading ride maintenance projects and programs at Disneyland, Universal Studios Hollywood, and Knott’s Berry Farm. He lives with his family near Los Angeles.
Website * Instagram * Facebook

About Lanie Speros & The Omega Contingency: 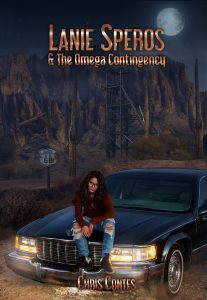 Lanie Speros & The Omega Contingency proves that sometimes it’s better if the adults just let the kids drive. The perfect mix of humor, tenderness, tension, and detail, Lanie Speros’ saga is tempered by fast-moving action and legendary landscapes. All to say, this is a story that doesn’t want to be put down. Lanie learns to trust her skills, but more importantly, she learns to embrace her own fiery spirit—and trust her friends. The greatest achievements are made by mixing daydreams with ambition and talent, and Lanie’s crew knows the powerful fourth ingredient—working together. Of course, being able to handle a car like a pro doesn’t hurt either.
For thirteen-year-old Lanie Speros, the journey from anonymous middle school life to epic subterranean adventure begins during a road trip. The accidental revelation of a hidden tunnel under her yard leads her family and best friend on a thrilling motorhome voyage full of danger, destruction and narrow escapes. But more importantly, it’s a voyage of self-discovery—one that changes Lanie’s entire outlook on what it means to become a teenager.
She returns home empowered, and the odyssey continues as she creatively eliminates criminals who want to infiltrate a secretive, forgotten city in the abandoned mine complex below her house. Suddenly having to question the motives of everyone she’s met in her new neighborhood, Lanie works with her friend Hudson to find the meaning of the cryptic clues, hidden rooms, and shadowy history of her new home.
During her exploration of the underground world, Lanie is faced with challenges that force her to develop the courage and self-confidence that she didn’t know she had. Her talent for driving, design and fabrication are all put to the test when she must go out on the road again—to defend herself, her family, and the enormous secret she’s agreed to protect.
When do young people decide what their calling in the world is? What do they do with their unique talents and abilities when they discover them? When do they realize that they should lead—instead of follow? These are the questions that Lanie answers on her quest. But, along the way she also finds her voice—and the confident, volcanic spirit that had been locked within her soul. It’s OK to not be typical…and it’s OK to refuse to be squeezed into the same mold as everyone else. When Lanie figures this out, life suddenly becomes a lot more fun.

“Readers will be more than satisfied with this pedal-to-the-metal Arizona adventure.”

The carriage rolled itself into a dark room. Almost before the door closed behind them, the floor dropped into the darkness. The lighting on the console was the only illumination and it cast a ghostly glow over the occupants. They were descending far below the surface; Lanie’s ears popped after a few moments.

“How far down are we going?” she asked. The elevator platform wasn’t slowing yet.

“We’re stopping around a thousand feet down,” their host said. “It’s not the lowest point in the site. I don’t really want you both any lower yet —you must be with me for your first visit to some locations; there are dangerous places down here. If you were killed or injured, you might never be found.”

Lanie didn’t look at Hudson in the seat behind her but assumed he considered himself warned, as she did.

Finally, the platform stopped, and the black door ahead rolled up. The carriage crept into a small room with steel doors on either end, and the door ahead didn’t open until the one behind them had closed. Their little vehicle accelerated into a dimly lit, unremarkable corridor lined with blue tile. Lanie had nearly given up on seeing any epic parts of the site, but then her jaw dropped as they emerged from the corridor and onto a towering concrete bridge.

The arched bridgeway spanned an enormous open space that Lanie estimated was over twenty stories high, and their roadway on the bridge’s spine was at least ten levels up from the cavern floor. The cavern’s open space was so large, the boundaries were hidden in the shadowy distance. Above, the ceiling was a mix of natural cave and carved rock, supported by both stone columns and man-made structures.

The size of the space eclipsed what Lanie had imagined, and she suddenly felt very small. What little light there was in the space was projected upward from tall light towers. The warm light lit the cavern’s ceiling, which then returned soft, diffused lighting to the floor below. Very few of the thousands of light towers were lit, but Lanie could make out the windows and terraces of buildings on the rocky ledges of the cavern’s walls. The buildings were linked by meandering pathways that snaked up and down amongst the natural rock formations. Lanie realized that exploring the perimeter of the cavern alone would probably take weeks. She even saw a colossal waterfall at the farthest corner and wished they could stop.

“Hudson, did you see…?” She had turned to draw Hudson’s attention to the waterfall, but he was already focused on it.

“Yeah, we gotta come back here—as soon as we can.”

Their bridge crossed the cavern near its center and shared the space with a massive vertical cylindrical structure which had rows of balconies around its exterior. Behind the balconies’ mesh handrails, hundreds of doors were lined up alongside each other. There were no handrails on either side of the bridge, and this amplified the reality of how high up they were on the narrow roadway. The track passed through the tower’s center and the two friends watched in awe as the looming structure approached.

“We’re above the Commons, and this building is the Residential Tower,” Esther said above the hum of the Atom’s hub motors. “You can explore this on your own—it’s pretty safe. There is a large garden and park on the floor below… well… what’s left of it anyway. The Commons are around the cavern’s outside edge, and there are lots of little shops and service centers. There are also automated snack shops and sundries vending machines down there.” She turned to look at both Lanie and Hudson together. “This site has been idle for sixty years—don’t eat anything out of the vending machines,” she warned. “Not even the Twinkies… forget what you may have heard.”

Five (5) winners will win a paperback copy of Lanie Speros & The Omega Contingency (Chris Contes) ~US ONLY!

2 thoughts on “Spotlight on Lanie Speros & The Omega Contingency (Chris Contes), Excerpt & Giveaway ~ US Only”

Run for Your Life
Poo in the Zoo: The Island of Dinosaur Poo
Noisy ABC
The Moonlight Zoo
Elephants Remember: A True Story
Little Hearts: Finding Hearts in Nature
Albie on His Way
A Cruel and Fated Light
Breakfast Buddies
Down in the Dumps: The Mystery Box
Down in the Dumps: Trash vs. Trucks
Down in the Dumps: A Very Trashy Christmas
Jingle the Christmas Clown
Map of Flames (The Forgotten Five #1)
Reindeer in Here: A Christmas Friend
I'm a Little Snowman
Santa Mouse Bakes Christmas Cookies (A Santa Mouse Book)
A Very CoComelon Christmas!
Happy All-idays!
The Love Match
The Magic Pencil
Leo's Lavender Skirt
Feminist Kids
Be Careful, Bruno!
A Rock in the Ocean
Skyriders
When You Wish Upon a Lantern
Keyana Loves Her Family
How Many Squirrels Are in the World?
Dreams of Song Times

You are here: Spotlight on Lanie Speros & The Omega Contingency (Chris Contes), Excerpt & Giveaway ~ US Only