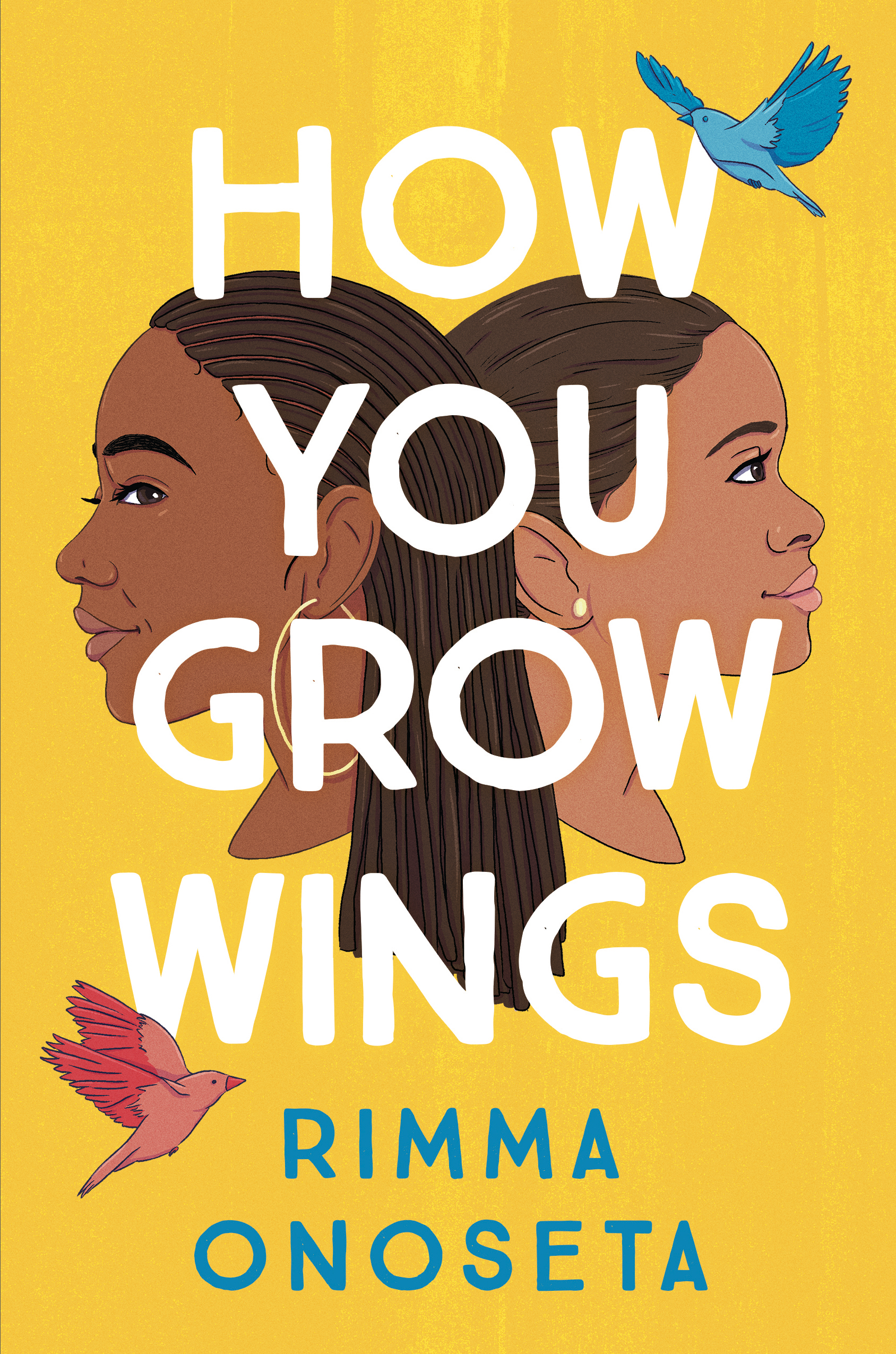 Read on for more about Rimma, her book, and a giveaway! 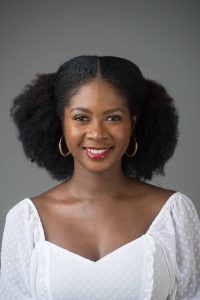 RIMMA ONOSETA is a Nigerian writer whose work explores identity, familial bonds, and the colonial corruption of African spirituality. She holds a degree in Finance from Northeastern University and an MBA from Suffolk University. Onoseta grew up reading late into the night, under her covers, with a flashlight and snacks. She writes stories she wanted to read when she was younger, stories about young Nigerians girls who are chaotic and fierce.

About How You Grow Wings: 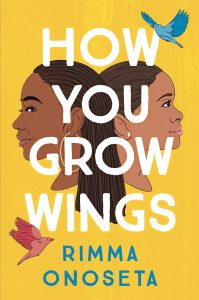 An emotionally riveting novel for fans of Ibi Zoboi and Erika L. Sánchez about two sisters in Nigeria on their journey to break free of an oppressive home.

Sisters Cheta and Zam couldn’t be more different. Cheta, sharp-tongued and stubborn, never shies away from conflict—either at school or at home, where her mother fires abuse at her. Timid Zam escapes most of her mother’s anger, skating under the radar and avoiding her sister whenever possible. In a turn of good fortune, Zam is invited to live with her aunt’s family in the lap of luxury. Jealous, Cheta also leaves home, but to a harder existence that will drive her to terrible decisions. When the sisters are reunited, Zam alone will recognize just how far Cheta has fallen—and Cheta’s fate will rest in Zam’s hands.

Debut author Rimma Onoseta deftly explores classism, colorism, cycles of abuse, how loyalty doesn’t always come attached to love, and the messy truths that sometimes, family is not a source of comfort, and that morality is all shades of grey.

WHEN I THINK of all the adults in my life, I’m filled with deep disappointment. Especially the ones I expected more from. Like Sister Benedicta. I used to think she was one of the better ones but I knew she was just like everyone else. Especially after that scene with the music teacher, the week before prefects were announced.

I was on my way home when a juvie I recognized as one of Zam’s classmates told me Zam was in the music room with Mr. Henry. Everyone knew what that meant. I hesitated. I should just let her be, let her learn things the hard way—the way I did. Zam needed to stand up for herself. But I found my feet walking towards the door. Sometimes I didn’t know if she was purposefully naïve or if she was just an idiot. Everyone in school knew you weren’t supposed to be alone with Mr. Henry. I peered through the window. I could see the tops of their heads but the piano blocked their bodies.

I tried the doorknob, and found it locked. I pounded on the door loudly and obnoxiously, the way landlords did when their tenants owed them rent. “Zam, come out. Let’s go home,” I shouted. Their heads snapped up at the noise.

Mr. Henry stood and opened the door, his hand resting against the door frame, blocking my entry. “Don’t you know how to knock properly? Is that how you knock on doors in your father’s house?”

I ignored him and ducked under his arm. “Zam, pack your

“Can’t you see that we’re having a lesson?” Mr. Henry said testily.

“Our mother is waiting for us and it’s just music lesson. It’s not as if it’s important. If you want to teach her, you can teach her when other students are around.”

I grabbed Zam’s arm and tried to brush past him but he used his body to block our exit. Mr. Henry wasn’t a big man. He was tall and slender and his oversized shirts made him look even skinnier than he was, but I knew he was still stronger than I was. He grabbed Zam’s other arm and tried to drag her to his side.

“Stop touching her!” I shrieked. Everyone knew the kind

of man he was. I tried to tug Zam away from him. “Who do you think you’re talking to like that?”

“Mr. Henry leave her alone, o!” I knew men like him. Men who had been given leeway to do whatever they wanted by other men in power and by women who chose to look the other way. Men like Mr. Henry were used to getting what they wanted and when they didn’t, they usually reacted in one of two ways: they slunk away unused to being confronted or they exploded, their egos unable to handle the indignity of being confronted. Mr. Henry was the latter.

He grabbed my arm and locked the three of us in an awkward circle.

“What sort of nonsense is this, Cheta? What kind of disrespect? How can you march into my office and act like this?” His nostrils flared as he shook us.

“You think we don’t know who you are? What you did to Mary? I’m not leaving you alone with my sister,” I yelled at him. I released Zam’s arm and tried to pry his fingers off mine.

He let go of Zam and dragged me out of the music room and into the corridor.

“Rapist. You no dey shame? You no see woman your age? Agbaya, as big as you are, you’re chasing small small girls. No woman your age wants you, so you follow fifteen-year-old girls.” I taunted him as he dragged me in the direction of the administrative office. Probably to report me to Sister Benedicta.

The school was mostly empty but a few stragglers stepped into the corridor or stuck their head out of their class windows to see what the commotion was about.

Title: How You Grow Wings

3 thoughts on “Spotlight on How You Grow Wings (Rimma Onoseta), Excerpt & Giveaway! ~ US Only”

Super Pizza and Kid Kale
My Imaginary Mary
Dark Room Etiquette
Tyrannosaurus Wrecks (FunJungle, Book 6)
The Labyrinth of Doom (Once Upon a Tim, Book 2)
The Door of No Return
Today Tomorrow Never
Ashley Sprinkler: Ancient Sacred Twisted Journey
Mystical Adventure of Ashley Sprinkler (Ashley Sprinkler: Ancient Sacred Twisted Journey)
The Deadlands: Hunted
Tommy and the Order of Cosmic Champions
A Little Ferry Tale
Can't Get Enough Space Stuff
Lark & Kasim Start a Revolution
If the World Were 100 Animals
Kapaemahu
Spells for Lost Things
The Take-Over Friend
How to Succeed in Witchcraft
Secrets So Deep
Last of the Talons (Talons, #1)
Bad At Love
Grounded For All Eternity
The Wolves and Moose of Isle Royale: Restoring an Island Ecosystem
Up to No Ghoul
Thirst
Relatively Normal Secrets
My Life Begins!
Frigg’s Journey to Anasgar (Chronicles of Nadavir #1)
The Battle of the Snake (The Adventures of Crimson and the Guardian #1)

You are here: Spotlight on How You Grow Wings (Rimma Onoseta), Excerpt & Giveaway! ~ US Only