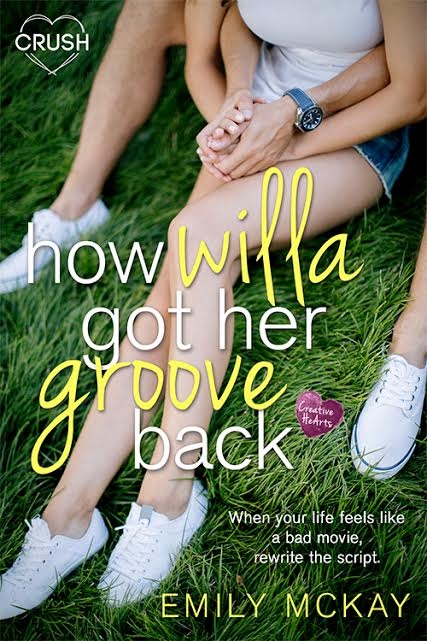 Writing How Willa Got Her Grove Back (my first book in the Creative HeArts series) was so much fun because I got to combine my three great loves: web series, Pride & Prejudice, and hanging out with my best friends.
That’s right. The three other writers in the series (Tera Lynn Childs, Shellee Roberts, and Tracy Deebs) are some of my best friends in the whole world. We have so much fun hanging out. And the only thing more fun than work with your best friends, is having a legit excuse to gossip, gripe about mean girls and swoon over hot guys.
I hope you love the Creative HeArts series as much as we do!

Today, we’re spotlighting How Willa Got Her Groove Back! This new book is a contemporary sure to keep you hooked all the way through. Read on for an excerpt by Emily McKay, and a chance to enter the giveaway! Emily McKay is a life-long fan of books, pop-culture and anything geeky. She has a black belt in Tae Kwon Do and baking cookies. When she’s not kicking-ass and scooping cookie dough, she’s watching videos from Screen Junkies (her favorite Youtube channel) or Pemberely Digital or Classic Alice. Okay, she has a Youtube problem! She’s seeking help. Really. Though, she may also have a slight problem with procrastination.

When the internet is down and there are no chocolate chips in the house, she does write books – everything from Harlequin romance novels to post-apocalyptic YA. Though her interests may appear broad, the common denominators are swoony heroes and snarky humor. This Entangled Teen Crush book contains an unbelievably hot bad boy, an unbelievably famous actress, and all the drama that comes with adding both to your family. Oh, and a forbidden flirtation with a soon-to-be stepbrother.

When your life feels like a bad movie, rewrite the script.When Willa Schofer’s father comes home from a business trip with an über-famous new fiancée, Willa’s senior year blows up in paparazzi-fueled flames. Overnight, she has a new house, a new car, and a new soon-to-be stepbrother—the unbelievably hot, unbelievably arrogant, Finn McCain. Thank god he’s constantly pushing her buttons, or she might do something irresponsible. Like fall for the jerk.Just when Willa’s decided to avoid him for, oh, ever, Finn lands in the center of her senior project team. Seriously—how hard is it to shake a guy? At least her work on the project snagged the attention of the (second) hottest guy in school. He might only be into her because of her famous stepmom, and he’s not quite as exciting as a certain annoying housemate, but at least she’s allowed to crush on the guy.Because crushing on your annoying stepbrother? So not cool.

With introductions in order, it’s time for an excerpt

from this exciting new read!

Excerpt:
Finn pauses by the door. “One more thing.”
“What?” I snap, hoping he keeps this short.
“How long have you known Damien?”
“Wait. What?”
“Have you known him long?”
“For years.”
“Has he always been that into you?”
“No,” I say automatically. “I mean, he’s not into me.” I pause, then ask. “I mean, is he?”
Finn closes his eyes, shaking his head like I exhaust him. “Just be careful.”
“Of what?”
“Damien is exactly the kind of guy who would date the stepdaughter of a famous actress just to get close to that actress.”
His words are so brutal, it takes a few seconds for me to even process them. “What?”
“Just be careful.”
“Get out.” Annoyed with myself and furious with him, I point to the item he left on my bookshelf. “And take your trash with you!”
He snags it and holds it up. “I brought it for you, but if you don’t want it, I’ll take it.” He gives a shrug to indicate his innocence, and as he does so I notice what’s in his hand. It’s one of the biscuits I made for Dad.
“What are you eating?” I ask the question even though I can see clearly what it is. It’s more shock than an actual question.
He holds up the biscuit in his hand. “Did you make these?” All I can do is stare at that biscuit. He takes my not answering as a yes. “Because they’re really good. A little stale, but still good. I’ve eaten like four already.”
I scurry down the steps of the ladder and stalk over to him to grab the half-eaten biscuit out of his hand. “They. Aren’t. For. You.”
“Oh, yeah. I got that.” He waves his hand like he’s defending himself from a swarm of gnats. “I heard all about your biscuit and sausage gravy obsession.”
“It’s not sausage gravy. It’s sawmill gravy.”
“There’s a difference?”
“Yes, sawmill gravy is—” I cut myself off when I see him smirking, and I realize how utterly ridiculous I must seem to him. “Just… Keep your hands off my biscuits.”
This time there’s a little heat to the smirk and he meets my gaze. “Is that code for something?”
I want to throw something at him—something heavy, and preferably very pointy sharp—but all I have in my hand is my biscuit.
“Get out.”
“Hey—”
“Get. Out.”
“But—”
“No. Just get out.” I stalk a few steps over to him. “Just leave. Go. I can’t—” And suddenly, I’m nearly crying. And I have to be alone. I just have to. Because I can’t take it—I just can’t. “Go. Now.”
And either I’m scarier than I thought or he’s more easily scared. Because he leaves. I slam the door shut behind him and once I’m alone, I lean back against the door and slowly slide until I’m sitting with my arms around my knees.
This day has been the kind of emotional roller coaster even Ben & Jerry’s can’t soothe. I’ve spent the past three years mooning over Damien, but now that he’s actually showing some interest in me, Finn is ruining it. Which I should totally have seen coming, because—after all—Finn is my nemesis.
So why then am I still wondering what it would have felt like if he’d kissed me?

How Willa Got Her Groove Back 4 thoughts on “Spotlight on How Willa Got Her Groove Back by Emily McKay, Plus Giveaway!”

Something Beautiful
Something About Grandma
Spineless
Big Game (FunJungle #3)
Lion Down (FunJungle #5)
Panda-monium (FunJungle Book 4)
Punky Aloha
When Santa Came to Stay
Busy Betty
Raising the Horseman
Hunterland
Armadas in the Mist
The Darker the Skies
Jester
The Drowned Woods
Zyla and Kai
A Duel with the Vampire Lord (Married to Magic, #3)
Meet the Moon
The Second Death of Edie and Violet Bond
The Honeys
Big stuff planes, rockets, spacecraft!
Put a Lyd On It! (Wrassle Castle #3)
Dressing Up the Stars: The Story of Movie Costume Designer Edith Head
Ask the Girl
Dinos Driving
A Synagogue Just Like Home
Bear Has a Belly (Big, Little Concepts, 5)
Biscuit and the Great Fall Day (My First I Can Read)
Listen Up! Train Song (Big, Little Concepts, 2)
The Long Ride Home

You are here: Spotlight on How Willa Got Her Groove Back by Emily McKay, Plus Giveaway!