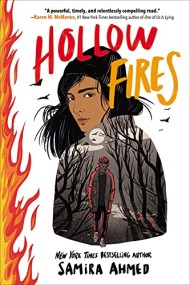 Read on for more about Samira, her book, and a giveaway! 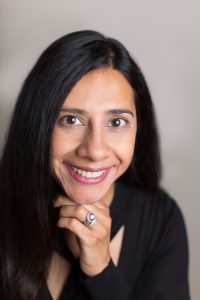 Samira Ahmed is the New York Times bestselling author of Amira & Hamza: The War to Save the Worlds Love, Hate & Other Filters, Mad, Bad, and Dangerous to Know, Internment, and Hollow Fires. She was born in Bombay, India, and has lived in New York, Chicago, and Kauai, where she spent a year searching for the perfect mango. She invites you to visit her online at samiraahmed.com and on Twitter and Instagram

About the Book: Hollow Fires:

A powerful, gripping YA novel about the insidious nature of racism, the terrible costs of unearthing hidden truths, and the undeniable power of hope, by New York Times bestselling author Samira Ahmed. Perfect for fans of Sadie and Dear Martin.

Safiya Mirza dreams of becoming a journalist. And one thing she’s learned as editor of her school newspaper is that a journalist’s job is to find the facts and not let personal biases affect the story. But all that changes the day she finds the body of a murdered boy.

Jawad Ali was fourteen years old when he built a cosplay jetpack that a teacher mistook for a bomb. A jetpack that got him arrested, labeled a terrorist—and eventually killed. But he’s more than a dead body, and more than “Bomb Boy.” He was a person with a life worth remembering.

Driven by Jawad’s haunting voice guiding her throughout her investigation, Safiya seeks to tell the whole truth about the murdered boy and those who killed him because of their hate-based beliefs.

This gripping and powerful book uses an innovative format and lyrical prose to expose the evil that exists in front of us, and the silent complicity of the privileged who create alternative facts to bend the truth to their liking.

Fact: Something that has a concrete, provable existence; an actual occurrence; an objective reality.

Truth: A quality or state in accordance with reality; the actual or true state or nature of a person, place, thing, or event. Fidelity. Honesty.

Lie: A false or misleading impression. A deception you tell yourself so you can sleep at night.

THE PAST IS PROLOGUE

Truth: Sometimes the dead whisper to you, in the quiet: Don’t let them forget I was here once. Alive. Young. I was like you. I believed I would live forever.

You never forget the first time you see a dead body.

It was warmish for a Chicago winter. If the temperature hovering around freezing is warm. (In Chicago, it is.) There was the sickly sweet rotting smell of leaves that had fallen from trees, mixing with mud, never totally drying up before the first snow. The odor filled the air around the sloping embankments of a crumbling stone culvert that was lined with steel. The pipe was hidden by overgrown limp grass, deep in Jackson Park, in the part where no one ever goes because there are stories of ghosts and Mothman sightings. It’s not the restored part of the park— the blooming Japanese garden, the shiny metal sculpture of giant petals, the bike paths, and the Illinois prairie popping with blue cornflowers. It’s the neglected area by the abandoned arched bridge that leads to nowhere. No one ever went there because there was absolutely nothing to see. Until the time there was.

The first thing I saw was a shoe.

A charcoal- colored canvas sneaker. It was damp, and there was a curved winter salt stain along its side, where the shoe had gotten wet and then dried. And another, higher water mark. Then another. Like the rings in a tree trunk that tell you how old a tree was, how long it lived before it was cut down. A passing of time. Three rings of storms. Three rings of floods. Weathering them all alone.

I remember thinking that canvas sneakers were not a good footwear choice. They weren’t warm enough, even for a mild winter day. Your feet would be cold. It was too wet. Silly Safiya. The cold and wet don’t matter if you’re dead.

But I didn’t stop. Couldn’t. I’d made a promise to a dead boy. And I was going to see it through.

I could say it was solely the hodgepodge of clues and half- baked theories that had led me there. Or my desire for justice. Or my needling curiosity that my friend Asma called nosiness. But I’m not that good a liar. There was a voice. His voice. The voice of a dead boy. I didn’t want to believe it. But it was there, pulling me forward, reeling me in, asking me to find the true story. And to tell it.

I shined my light into the steel- lined culvert.

The shoe belonged to a body that led to a face I’ll never forget.

When you see a dead body, you freeze, a layer of ice forming under your skin. You stare one second longer— too long— and that ice shatters, and the truth of what you’re seeing cuts you in a million places. The body you’re looking at was a person who lived and breathed and was part of this world. And even though your brain can’t form a single clear thought, one idea burrows its way into your bones: This body— this person— is now part of you, forever. Not merely the memory of those empty, dark-brown eyes, or their crooked blue fingers, or the rigidness of their jaw, half- open in a silent scream. No. It’s not what they looked like that you never forget. (Even though you never forget that, either.) It’s that they never leave you. They are a part of your air. Your sweat. The blackness behind your eyes when you try to sleep. They were young. Too young. And now their too few memories are yours to protect. To hold. Their entire life was a beginning rushed to an end. They never got a middle. They never got the heart of their story.

At first you ignore it, the echo. But it never goes away. It’s quieter at times. The voice. And then louder. Pleading. Plaintive. Angry. Sometimes it doesn’t feel like a metaphor. Sometimes the voice sounds like your own.

I’m more than the sum of small facts.

I’m more than a body.

My Journalism Ethics professor tells me that I can’t report on this story— I’m too close, even now, sixteen months after I found the body. He says my job is solely to find the verifiable, immutable facts. But those facts don’t give you the whole story. They don’t distill the truth of how it all happened, of why it was him. Of why it was me. Of what we owe the dead. Or how one death can change the way you look at the entire world.

Some facts barely scratch the surface of the truth.

Some facts obscure it.

Some facts are lies.

Some lies are necessary.

One fact that is the truth: Jawad Ali was fourteen years old when he was killed. And I’m the one who found him. One day he was a ninth grader. Then he was accused of being a terrorist. Then he was murdered. This isn’t my story to tell, not exactly. But I’m here, trying to gather the truth, the whole truth, and nothing but the truth. Tugging at tangled threads of memory while the jury is still out. I could claim to be objective. But that would be a lie. And lies are what got us here in the first place.

You are here: Spotlight on Hollow Fires (Samira Ahmed), Excerpt, Plus Giveaway! ~ (US Only)