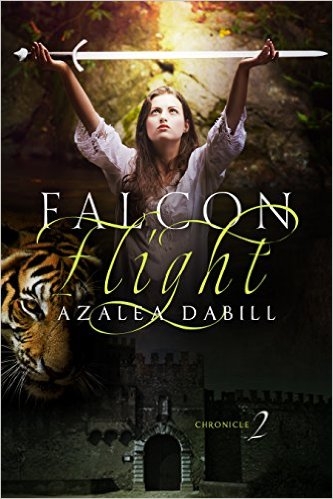 Today we’re putting a spotlight on Azalea Dabill’s novel, Falcon Flight. Read on for more about Azalea, her novels, an excerpt, plus a giveaway! Murder, sacrifice, vengeance … compassion and an adventure beyond fear.

Slavers steal first­daughter Kyrin Cieri from medieval Britain and sail for Araby. With a strange dagger from her murdered mother’s hand, an exiled warrior from the East, and a peasant girl, Kyrin finds mystery, the art of war, and friendship closer than blood.

For no one can take the right of a stronghold first­daughter, once given. Determined to escape to her beloved father in Britannia and take up the keys of her stronghold, Kyrin first seeks justice for her mother’s blood.

But her Arab master has the exile Tae Chisun teach Kyrin the way of the warrior. Then sudden love and war over “blood for blood” in the Araby sands strengthens Kyrin’s chains with rejection and danger. In Oman, she adds defying the caliph’s court guardsman to her impossible quest, pursued through dreams by a tiger and a chained falcon, a haunting mirror of her slavery.

Struggling against the tiger within and mounting odds in her master’s house, vengeance falls unexpectedly in Kyrin’s lawful reach. She takes up her mother’s blade.

In a fateful twist, vengeance will bring freedom, while raising the falcon dagger against her master’s blade will destroy those she loves and all hope of reaching Britannia. Kyrin and the falcon must choose; freedom or ashes. Fierce cry in the sky, wild and high . . . Kyrin Cieri, long lost keeper of the keys and unfit first daughter, is the hope of Cierheld stronghold or its doom.

She returns to Britannia from slavery, the king dies, and a treacherous hand wounds Kyrin’s father. Ambitious lords and the intrigue she thought she left behind in Araby engulf her stronghold.

Talik Wyman, holder of secrets, is more than a low­born messenger for the northern lords. Torn by love, loyalty, and intrigue between Talik, a lord’s son she’s sworn never to handfast, a rival stronghold daughter, her father’s life, and the wazir’s vengeance, Kyrin must find the strength to become who she was born to be or all will end in ash.

Behind them all lurks the tiger of destruction. Yet Kyrin carries at her side the falcon dagger, the key to life, death, and a traitor deeper yet. Azalea Dabill grew up building forts in the oaks of the California hills. She remembers the fuzzy sweetness of moss and acorns, the perfume of lupines and poppies, the night­song of crickets, and dreams of day­time hunts for lizards and squirrels. Homeschooled, she read fantasy and adventure of all sorts to her siblings. Now she enjoys growing things, bookstores both old and new, and hiking the wild.

Not finding enough tales of adventure, romance, and mystery, Azalea writes young adult fantasy. YA mythic fantasy that spans worlds near and far. Reading level twelve and up.

From stronghold lords, desert princes, and a fearful first­daughter who must save her people; to a sword of power and a princess running for her life; to an outcast caught in a dragons’ war begun at the dawn of time; to sleeping Briar Rose, her sister, and the battle for their hearts against an ancient enemy, you will find great adventures for your body, heart, and soul.

Crossover: Find the Eternal, the Adventure.

Kyrin kicked her horse back across the road, Berd and Twr beside her. They had to get to the nearer pass; they could not outrun this force all the way to Cierheld hall by the roundabout valley road. A shout rose, and Kyrin glanced back as several mounted men swung from formation and raced to cut them off. The setting sun washed their helmets, chain­mail, and tunics in hazy gold.

Berd and Twr made it into the trees a length ahead of her, glancing over their shoulders. Kyrin urged her horse under the leafless branches, and the trunks split them from each other.

Shouts and the thud of hooves echoed between tree­trunks. One of the shadows resolved into a man who swung his horse before Kyrin’s. His shod foot struck her leg and he raised a short spear as his mount surged against the mare. Kyrin leaned back to avoid his thrust, her sword half­drawn.

His weapon struck her side and glanced off her leather belt. She let go of her sword and grabbed the spear shaft as it began to withdraw and yanked. The man slid toward her, releasing his spear as he struggled for balance. She whipped the shaft back at him, like a scythe on a wicked back­sweep, and toppled him from his mount.

More pursuers flickered in and out of existence under the trees. An arrow struck her horse’s rump and glanced aside. His stride lengthened.

A thicket parted, and Twr galloped toward her across a small clearing. Two spearmen closed in on him from either side. Then Berd was beside her, his mount’s hooves pounding along beside hers. Kyrin swerved away.

“Go!” Berd shouted. Sword out, he charged Twr’s attackers. Kyrin did not bother to answer, pulling her mount up to string her bow. She was ten times a fool for not stringing it before they started, and she should have worn her mail.

A blow across her back flipped her off her horse. She gasped for air, struggling toward her feet, her hands empty, numbness spreading across her back. There was a muffled squawk and a hard beak or talon pricked her stomach. Kyrin gasped.

A mounted archer circled her, grinning. Her bow was broken, a shattered limb sticking up from the ground. The spearmen were down, Berd’s saddle also empty though he stood, unarmed. Twr rode toward him, hand outstretched.

Then another archer came out of the trees, his arrow leveled at Kyrin, ignoring the men. The archer circling her cast a glance at his rival, cursed, and drew on her.

Berd leapt for the second mounted archer as Kyrin jumped, desperately striving for height with all the power of her legs gained kicking straw men off Ali’s garden wall. She was aware that Berd crashed into the second archer’s horse as she came up and lashed out, her axekick wiping her attacker’s bow­arm across his body—then her other boot took him in the throat—even as the second archer’s arrow whipped past her ear with a wicked, thick­voiced whisper.

1 thought on “Spotlight on Falcon Flight by Azalea Dabill, Plus Giveaway!”

You are here: Spotlight on Falcon Flight by Azalea Dabill, Plus Giveaway!