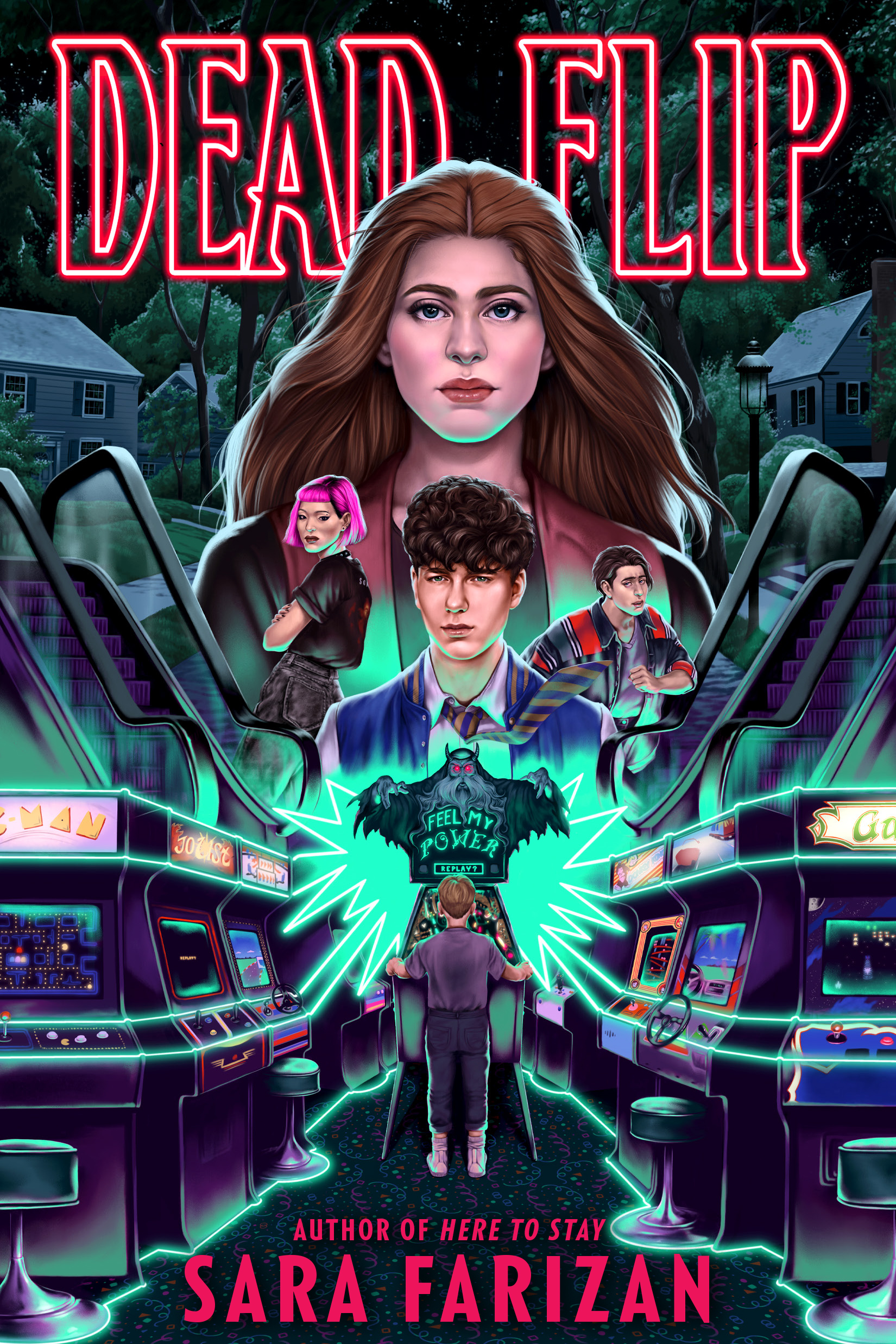 Read on for more about Sara, her book, and a giveaway! 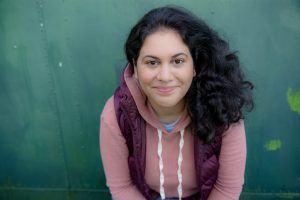 Sara Farizan is a critically acclaimed Iranian American author of the young adult novels Here to Stay, Tell Me Again How a Crush Should Feel, and the Lambda Literary Award-winning If You Could Be Mine, which was named one of Time magazine’s 100 Best YA Books of All Time. She lives in Massachusetts, where she watches ‘90s cartoons and ‘80s commercials to relax; loves pinball, but is wary of certain machines; and thanks you for reading her work. 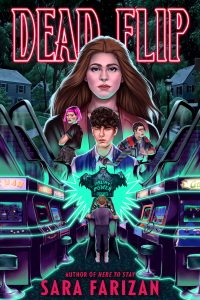 Growing up, Cori, Maz, and Sam were inseparable best friends, sharing their love for Halloween, arcade games, and one another. Now it’s 1993 — Sam has been missing for six years, and Cori and Maz aren’t speaking anymore. How could they be, when Cori is sure Sam is dead and Maz thinks he may have been kidnapped by a supernatural pinball machine? These days, all Maz wants to do is party, buy CDs at Sam Goody, and run away from his past. Meanwhile, Cori is a homecoming queen, hiding her abiding love of horror movies and her queer self under the bubblegum veneer of a high school queen bee. But when Sam returns—still twelve years old while his best friends are now eighteen—Maz and Cori are thrown back together to solve the mystery of what really happened to Sam the night he went missing and why frozen screaming bodies have started showing up. Beneath the surface of that mystery lurk secrets the friends never told one another, then and now. And Sam’s is the darkest of all….

When we entered Rob’s Newsstand, the smells of sugar, yellowing newspaper, and pickles from Rob’s sandwich hit my nostrils.

“Well, if it isn’t Moe, Larry, and Curly,” Rob said from behind the glass counter full of expensive pipe tobacco, fancy Zippo lighters, and political campaign memorabilia from the Roosevelt and Eisenhower years. Rob was a short, stocky white guy in his early sixties. His thinning hair was always messy, like he had just woken up from a nap. He wore huge eyeglasses that never drooped down his pug nose.

“Hey, if you’d like to pay for AC along with all the comics you read but never buy, be my guest.”

“So long as Bill’s buying scratchers, I’ll keep afloat,” Rob said, nodding at a scruffy, heavy-set man who was hunched over a small plastic lottery stand. Bill was there so much he felt like a part of the place, but that was my first time hearing his name. We picked our candies. Pink lemonade Juice Box gum for Cori, Melody Pop for Sam, and Strawberry Bonkers for me. When we put them on the counter, Rob set his hand on the Melody Pop.

“No dice, kid. You can buy any other candy if you’re going to be hanging around,” Rob said. “Or I’ll sell it to you on your way out.”

“I got something better than a comic book. Go take a look by the sodas.”

The three of us walked to the back of the store, past the cereal boxes and cans of soup. There, beside the clear fridge full of sodas, in all its electronic glory, was a pinball machine.

“All right!” Sam exclaimed, rushing toward it.

I sidled up to the machine next to Sam. The game was called Sorcerer. There were two dragons that mirrored each other with their mouths open, about to gobble the flippers up. The Sorcerer, with his long white beard, reached his hand up in the center; his hat—with yellow stars on it—cut between the point circles. Another sorcerer, with the same white beard but with horns, shot lightning out of his fingers. There were red lights shaped like eyes in the back of the playfield that weren’t lit up. Yet.

It was a little old, kind of dinged up. There were pinball machines that were newer at the arcade, but the longer I looked at it, the more I wanted to play. I could see myself spending hours on it, waiting for the multicolored lights to shine and having my initials on the scoreboard for years to come, my legendary skills on display for all time.

I could have sworn the start button lit up before the coin dropped. Sam pulled on the plunger and sent the silver ball up the lock ramp. When he did, the two fiery red eyes from the back of the board lit up and flashed. The Sorcerer said “Feel my power!” before the eyes flickered and the ball released. I tried to play it cool and not show my excitement, but Sam cheered.

I turned my attention back to the Sorcerer. Not as much attention as it was paying us. Before Sam pulled on the plunger for his second turn, I felt I was being watched. I looked at the machine. The painted red eyes in the back, the ones that would light up, moved. It was quick, but they flicked from me to Sam before they shifted back into place.

I should have told her what I saw. Maybe it would have kept all of us together.

“Nothing,” I said. I thought I was probably dehydrated. I took a sip of soda and watched Sam play until it was time to go home.

Five (5) winners will win a copy of Dead Flip (Sara Farizan) ~US ONLY!

Mr. Bear's World of Food
Augland
The Totally Not Wicked Stepmother
The Real Dada Mother Goose: A Treasury of Complete Nonsense
Bad Drawer
Opposites - Opuestos
Professor Wooford McPaw’s History of Astronomy (Professor Wooford McPaw's History of Things, #2)
Nothing Sung and Nothing Spoken
The Lodge that Beaver Built
The Circles in the Sky
Black Forest Bound
Shadows Over London
A Thousand Heartbeats
A Wilderness of Stars
The Gifts That Bind Us
The Poison Season
This Cursed Crown (These Feathered Flames, #2)
Long Goes to Dragon School
So Much Snow
The Best Gift for Bear
Warriors: A Starless Clan #2: Sky
Underground Fire: Hope, Sacrifice, and Courage in the Cherry Mine Disaster
Swift and Hawk: Cyberspies
PAWS: Mindy Makes Some Space
The In-Between
The Secret of the Legendary Tribe
Normal
SPIKED!
The Roan Stallion, Book 2 of Legend of Big Heart
Throwback