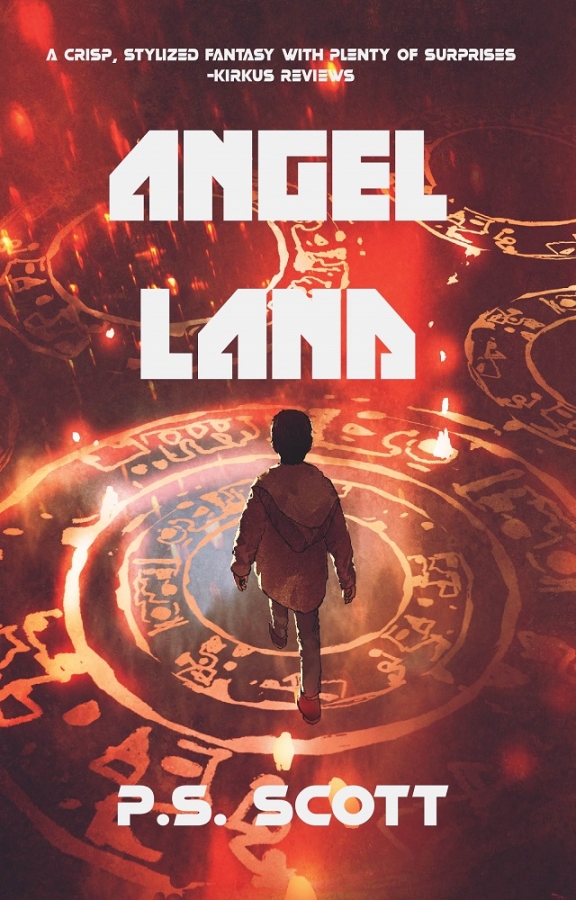 P.S. Scott first started writing at seven and hasn’t looked back. An unabashed optimist, manga lover and true believer in the power of chocolate, P.S. now writes books that transport her to faraway lands of imagination and shares them with other dreamers.

Gabriel Perez has a dream

Thirteen-year-old Gabriel Perez wants to become the Ruling Archangel of Celestia. The catch? He doesn’t have wings. And, that means he can’t get into one of the eight prestigious guilds and fulfill his dream.

After failing the entrance, Gabriel stumbles on a wanted criminal and becomes embroiled in a high-profile abductions case. He is sent to the best guild- The Holy Guild- for protection where he gets a shot at his dream of becoming a Ruling Archangel.

An adventure of a lifetime.

At the Holy Guild, Gabriel makes friends and discovers himself. But a criminal is looking for him. As secrets come to light, Gabriel must decide who he really is and fight the evil taking over the city. Filled with excitement and adventure, Angel Land is a story about the power of dreams.

Being an angel without wings is a tough business.

For one thing, you can’t fly anywhere, so you have to depend on the Seraphim City Mass Transit (SCMT), which is always late.

“The next train will arrive at 1:30 p.m.” a pre-recorded voice announces, which doesn’t fill me with much hope, because the last time it arrived at 1:30 p.m. was well…never.

I twiddle my thumbs, looking up at the sky shielding Station No. 6 of the Central Line. When I’m the Ruling Archangel of our country, Celestia, I’ll never have to take the SCMT.

“My name is Gabriel Perez, I’m thirteen years old, and my dream is to become the Ruling Archangel of Celestia!” I shout to nobody, watching my reflection in the glass panels between civilian angels and the boarding platforms.

The silver-haired woman standing next to me stares at me, adjusts her spectacles, then turns left and right. Her wings are old and bruised, probably the reason she’s taking the mass transit instead of flying to her destination. Only the old, the sick, and those without wings, ever have to contend with flying trains. Sometimes regular angels choose to take it for traveling long distances. However, the reason I use the mass transit is none of the above.

I fall into the 0.001% of angels who are born without wings.

The lady next to me shakes her head at my enthusiastic monologue, wondering if I have a few screws missing in my head.

But no one can pop my bubble because the Guild Trainee Entrance Examination (GTEE) results come out today, and I hope to find out I have passed it. The flying train on the platform behind us whooshes into place, filling the entire station with light. Angels pile into the long, white carriage, hurrying to get in before the automatic doors close. The scent of sandwiches, soups, and pastries drifts from above the stairs, making my stomach growl.

“You, do you polish wings?” a deep voice asks.

“Yes, sir,” I reply brightly, scouring my bag for a brush. “Would you like a super shine?”

Unfortunately, it is only now that I notice that this man is an Angel Patrol officer, and I’m facing him armed with a toothy smile, wing polish in one hand, and a brush in the other—the worst possible combination.

“No soliciting, boy. Do you hear me?” Dressed in signature red and gold robes and wearing a menacing expression, he lifts me up using one finger, and I’m helpless to resist.

“Y-yes, s-sir.” My voice comes out in a panicked stutter.

“Train arriving. Stay clear of the golden lines,” a recorded voice announces—honey to my ears. The policeman drops me and crosses his arms over his chest, giving me a threatening look. I hurriedly follow the other passengers into the train and close my eyes, praying for the door to close.

The Angel Patrol officer points at me. “If I ever see you again…”

“You won’t!” The glass door closes. The train climbs up into the air and the patrol officer becomes more and more distant until he’s only a dot on the ground.

Angels displaying their beautiful white wings are flying all around the train. Feathers are falling and floating gently in the blue summer sky, making my heart thrum with a sense of joy that I always feel when I’m in the air. If I had wings, I’d never set foot on the ground.

One winner will recieve a paperback of Angel Land (P.S. Scott) ~ (US Only)

You are here: Spotlight on Angel Land (P.S. Scott), Excerpt, Plus Giveaway! ~ (US Only)