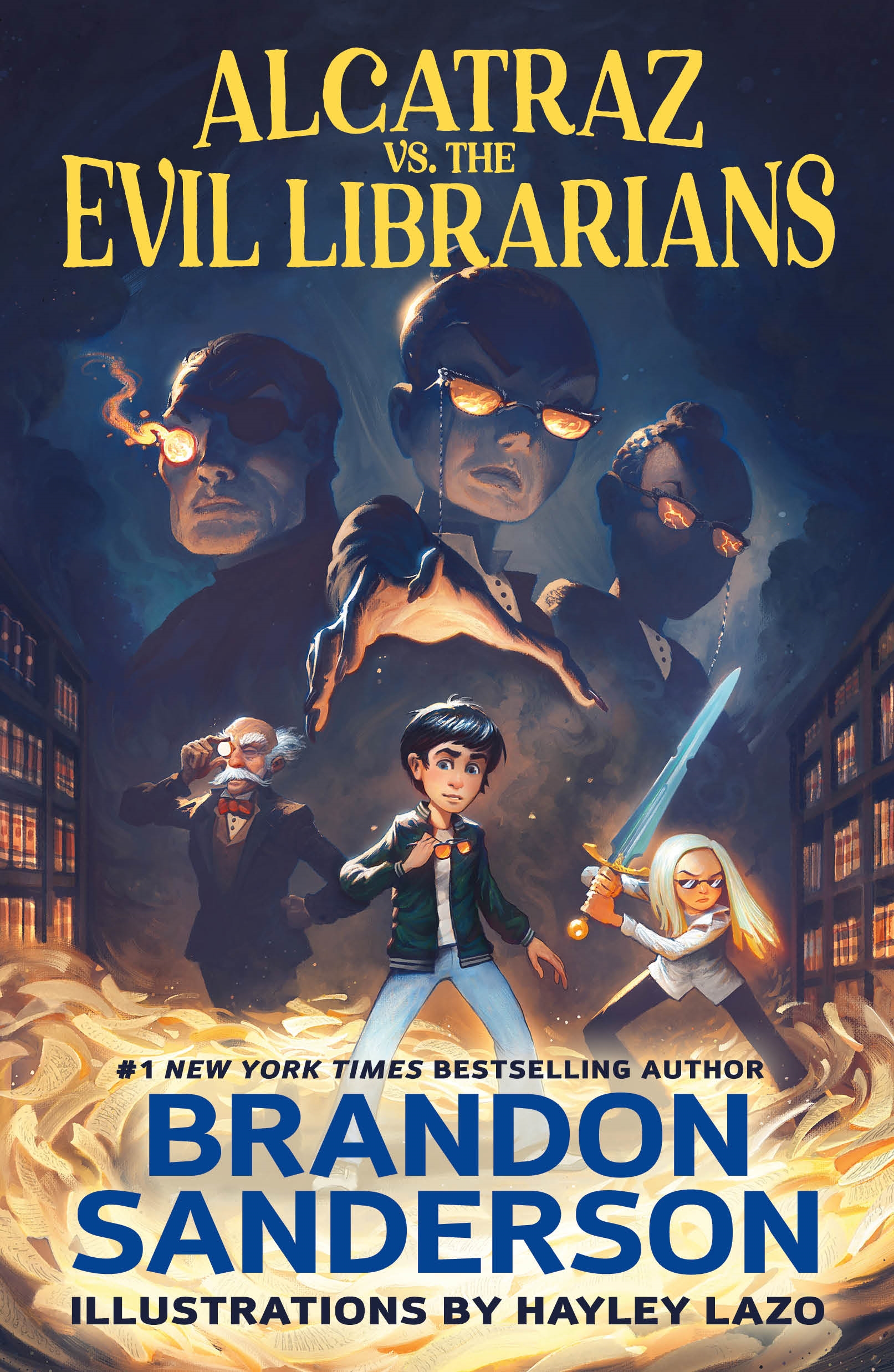 Read on for more about Brandon, his book, and a giveaway! 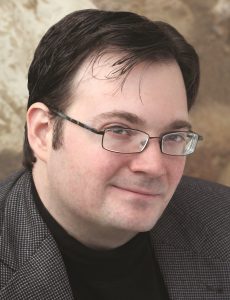 BRANDON SANDERSON is the #1 New York Times bestselling author of The Rithmatist and Steelheart, both of which were selected for the American Library Association’s Teens’ Top Ten list. He’s also written many popular and award-winning books for adults. Visit him online at BrandonSanderson.com.

About the Book: ALCATRAZ VS. THE EVIL LIBRARIANS 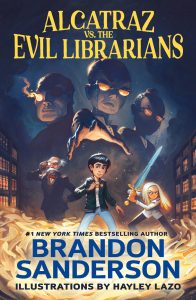 On his thirteenth birthday, foster child Alcatraz Smedry gets a bag of sand in the mail – his only inheritance from his father and mother. He soon learns that this is no ordinary bag of sand. It is quickly stolen by the cult of evil Librarians who are taking over the world by spreading misinformation and suppressing truth. Alcatraz must stop them, using the only weapon he has: an incredible talent for breaking things.

Alcatraz vs. the Evil Librarians is the first book in this action-packed fantasy series for young readers.

So there I was, tied to an altar made from outdated encyclopedias, about to get sacrificed to the dark powers by

a cult of evil Librarians.

As you might imagine, that sort of situation can be quite disturbing. It does funny things to the brain to be in such danger—in fact, it often makes a person pause and reflect upon his life. If you’ve never faced such a situation, then you’ll simply have to take my word. If, on the other hand, you have faced such a situation, then you are probably dead and aren’t likely to be reading this.

In my case, the moment of impending death made me think about my parents. It was an odd thought, since I hadn’t grown up with them. In fact, until my thirteenth birthday, I really only knew one thing about my parents: that they had a twisted sense of humor.

Why do I say this? Well, you see, my parents named me Al. In most cases, this would be short for Albert, which is a fine

name. In fact, you have probably known an Albert or two in your lifetime, and chances are that they were decent fellows. If they weren’t, then it certainly wasn’t the name’s fault.

Al also could be short for Alexander. I wouldn’t have minded this either, since Alexander is a great name. It sounds kind of regal.

I’m certain that you can think of other names Al might be short for. Alfonso has a pleasant ring to it. Alan would also be acceptable, as would have been Alfred—though I really don’t have an inclination toward butlery.

My name is not Alfonso, Alan, or Alfred. Nor is it Alejan- dro, Alton, Aldris, or Alonzo.

My name is Alcatraz. Alcatraz Smedry. Now, some of you Free Kingdomers might be impressed by my name. That’s wonderful for you, but I grew up in the Hushlands—in the United States. I didn’t know about Oculators or the like, though I did know about prisons.

a twisted sense of humor. Why else would they name their child after the most infamous prison in U.S. history?

On my thirteenth birthday, I received a second confirmation that my parents were indeed cruel people. That was the day when I unexpectedly received in the mail the only inheritance they left me.

It was a bag of sand.

I stood at the door, looking down at the package in my hands, frowning as the postman drove away. The package looked old—its string ties were frayed, and its brown paper packaging was worn and faded. Inside the package, I found a box containing a simple note.

Here is your inheritance, as promised.

Underneath the note, I found the bag of sand. It was small, perhaps the size of a fist, and was filled with ordinary brown beach sand.

Now, my first inclination was to think that the package was a joke. You probably would have thought the same. One thing, however, made me pause. I set the box down, then smoothed out its wrinkled packaging paper.

to get the ink in a pen to flow. On the front there was writing. It  looked old  and  faded—almost  illegible in places—and yet it accurately spelled out my address. An address I’d been living at for only eight months. 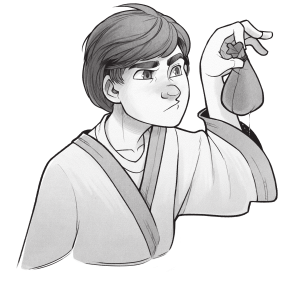 Then I went inside my house and set the kitchen on fire.

Now, I warned you that I wasn’t a good person. Those who knew me when I was young would never have believed that one day I would be known as a hero. The word heroic just didn’t apply to me. Nor did people use words like nice or even friendly to describe me. They might have used the word clever, though I suspect that devious may have been more correct. Destructive was another common one that I heard, but I didn’t care for it. (It wasn’t actually all that accurate.)

Still holding the strange package, I wandered toward my foster parents’ kitchen, lost in thought. It was a very nice kitchen, modern looking with white wallpaper and lots of shiny chrome appliances. Anyone entering it would immediately notice that this was the kitchen of a person who took pride in their cook- ing skills.

I set my package on the table, then moved over to the kitchen stove. If you’re a Hushlander, you would have thought I looked like a fairly normal American boy, dressed in loose jeans and a T-shirt. I’ve been told I was a handsome kid—some even said that I had an “innocent face.” I was not too tall, had dark brown hair, and was skilled at breaking things.

When I was very young, other kids called me a klutz. I was always breaking things—plates, cameras, chickens.

4 thoughts on “Spotlight on ALCATRAZ VS. THE EVIL LIBRARIANS (BRANDON SANDERSON), Excerpt Plus Giveaway! ~US/CAN”

You are here: Spotlight on ALCATRAZ VS. THE EVIL LIBRARIANS (BRANDON SANDERSON), Excerpt Plus Giveaway! ~US/CAN