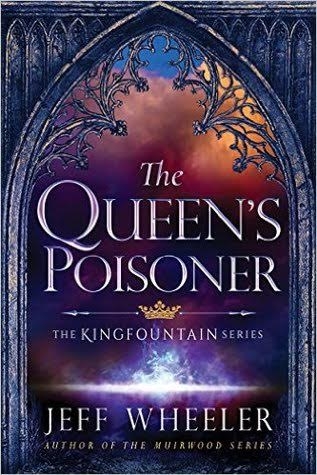 Today we’re putting a spotlight on Jeff Wheeler’s novel, The The Queen’s Poisoner. Read on for more about Jeff, his novel, an excerpt,  plus a giveaway! Jeff Wheeler took an early retirement from his career at Intel in 2014 to become a full-time author. He is, most importantly, a husband and father, and a devout member of his church. He is occasionally spotted roaming among the oak trees and granite boulders in the hills of California or in any number of the state’s majestic redwood groves. He is the author of The Covenant of Muirwood Trilogy, The Legends of Muirwood Trilogy, the Whispers from Mirrowen Trilogy, and the Landmoor Series.

The queasiness blossomed inside Owen and a cold sweat started on his brow. Going back was no longer an option. The tunnel was narrow and there was no place to hide, so Owen hurried forward, hoping to find an escape into the main palace corridor. It would be infinitely better to be punished for wandering the hall at night than to be caught in the Espion corridor. His little heart started to hammer wildly in his chest and the blackness in front of him became even darker somehow.

The boy was starting to panic. Ankarette had warned him this could happen. She had told him it was dangerous to wander the tunnels alone and that he needed to be very cautious and always listen for sounds that were out of place. Such as the footfalls behind him.

The narrow pinch of the corridor suddenly filled in ahead of Owen, the walls closing like an arrowhead. It ended abruptly and finally. It was a dead­end.

Excerpted from THE QUEEN’S POISONER © Copyright 2016 by Jeff Wheeler. Reprinted with permission by 47North. All rights reserved.

One winner will receive a copy of The Queen’s Poisoner (US only).

4 thoughts on “Spotlight: The Queen’s Poisoner, Plus Giveaway!”

You are here: Spotlight: The Queen’s Poisoner, Plus Giveaway!