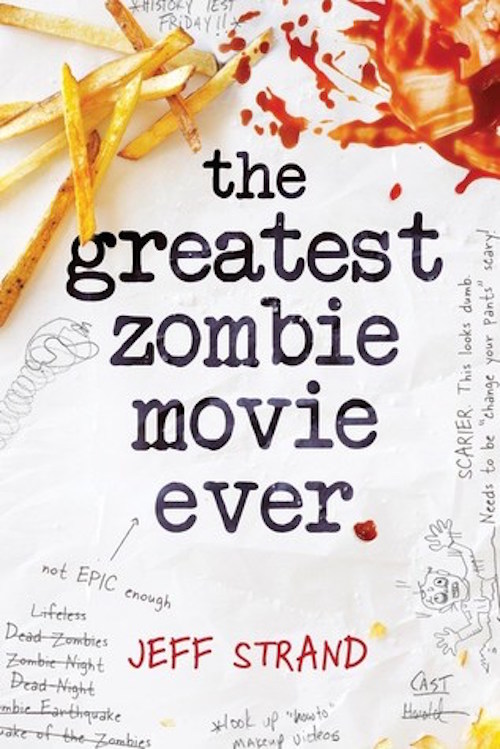 THE GREATEST ZOMBIE MOVIE EVER

Today we’re super excited to bring you an excerpt from THE GREATEST ZOMBIE MOVIE EVER, releasing on March 1, 2016 from Sourcebooks Fire, plus a fun list from the author, Jeff Strand. Before we get to the excerpt, here’s more about the book!

After producing three horror movies that went mostly ignored on YouTube, Justin and his filmmaking buddies decide it’s time they create something noteworthy, something epic. They’re going to film the Greatest Zombie Movie Ever. They may not have money or a script, but they have passion. And, after a rash text message, they also have the beautiful Alicia Howtz—Justin’s crush—as the lead.

With only one month to complete their movie, a script that can’t possibly get worse, and the hopes and dreams of Alicia on the line, Justin is feeling the pressure. Add to that a cast of uncooperative extras and incompetent production assistants, and Justin must face the sad, sad truth. He may actually be producing The Worst Zombie Movie Ever…

The vampire, whose fangs were too big for his mouth, turned to the camera and hissed.

“Don’t look at the camera,” said Justin Hollow, the director.

“I keep poking my lip on these things,” said Harold, spitting the plastic fangs out onto the ground. He hadn’t been a very frightening example of the undead before, and he was even less scary with no fangs and a thick line of drool running down his chin.

“Cut!” shouted Justin, loud enough to be sure that the command was heard by his production crew of two. “C’mon, Harold. Stay in character. We’re three hours behind schedule.”

Justin let out his thirty-ninth exasperated sigh of the night. “The movie has to come out first.”

Justin bristled. It was a full body bristle, head to toe, which he hadn’t even realized was physically possible. Bobby, who handled sound recording, and Gabe, who handled everything else, both stepped back a couple of feet. Neither of them truly believed that they were about to witness a murder, but they wanted to get out of the splash zone, just in case.

Had this been one of Justin’s movies, he would have very slowly lowered his camera, stared directly into Harold’s eyes with a steel gaze, and then after an extremely dramatic pause asked “What…did…you…just…say?”

His actual response, delivered in a squeakier voice than he would have allowed from his actors, was: “Huh?”

“I said it’s not a real movie.” Harold started to wipe the fake blood off his mouth. It didn’t come off, and probably wouldn’t for several days. Justin had planned to feel guilty about this later, but now he wouldn’t bother. “Nobody’s ever going to see it. You probably won’t even finish it.”

“I finished my last three movies!” Justin insisted. “I got hundreds of hits on YouTube!”

That statement was technically accurate, though it was the lowest possible number of hits you could get and still use “hundred” in its plural form. The only comment anybody posted about his latest film had been “This twelve year-old filmmaker sort of shows promise,” which really frustrated Justin since he was fifteen.

Harold shrugged. “This is a waste of time. I’ve got better things to do on a Fridaynight.”

“I’m going to think, wow, it sure is nice to be such a well-paid dentist.”

Harold walked off the set. It wasn’t an actual set, but rather a small park near Justin’s home, where they were filming without a permit. Justin knew he should shout something after his ex-actor. Something vicious. Something devastating. He thought about shouting “You’ll never work in this town again!” but, no, it had to be something that Harold would consider a bad thing.

“Fine!” Justin shouted. “But when we record the audio commentary track for the Blu-Ray, I’m going to talk about how you abandoned us, and how much happier everybody was with the new actor who took your role, and how we all agreed that he should have been cast in the first place, and how he had so many girlfriends that he couldn’t even keep track of them, and how they all found out about each other and had a great big awesome catfight in his front yard! And I’ll pronounce your name wrong!”

#5: DAWN OF THE DEAD (2004 version). I was one of the many people bellowing, “You can’t remake DAWN OF THE DEAD! This is blasphemy! Blasphemy!!!” But somehow this remake to a sequel (but not a sequel to the remake) turned out to be awesome. Not quite as good as the original (SPOILER ALERT: That’s #3 on this list) but one of my all-time favorites.

#4: RE-ANIMATOR. I’ve now seen plenty of movies that are more over-the-top insane than RE-ANIMATOR, but this was the first movie where I simply couldn’t believe what I was watching. It was hard to believe that a movie so dark and gruesome could be so funny.

#3: DAWN OF THE DEAD (1978 version). Shameful confession: When I first saw this in high school I thought it was stupid and boring. Fortunately, I matured and accepted that it’s one of the high points of zombie cinema. It’s the reason I know to duck before walking toward spinning helicopter blades.

#2: RETURN OF THE LIVING DEAD. Fast zombies long before 28 DAYS LATER! The first time zombies ate brains! It doesn’t often get the credit it deserves, but this is one of the most influential zombie movies ever.

Jeff Strand has written more than twenty books, and is a four-time nominee (and four-time non-winner) of the Bram Stoker Award. Two of his young adult novels, A Bad Day For Voodoo and I Have A Bad Feeling About This, were Junior Library Guild picks. Publishers Weekly called his work “wickedly funny.” He lives in Tampa, Florida.

Sourcebooks Fire is offering 2 ARCs of THE GREATEST ZOMBIE MOVIE EVER. To enter their giveaway, just fill out the Rafflecopter form below.

Boop the Snoot
I Really Want to Be First: A Really Bird Story
I Really Want a Bigger Piece: A Really Bird Story
Beguiled
The Only Me
The Witch Hunt
The Love Match
Manifest
A Thousand Heartbeats
Alone Like Me
Saving the Butterfly
Stop and Smell the Cookies
How To Be A Rock Star
Growing an Artist: The Story of a Landscaper and his Son
The Blood Traitor (The Prison Healer Book 3)
The Lucky List
That's Not My Name
The Merchant's Curse (The Harwood Mysteries #4)
Miraculous
Out of the Blue
The Witchery
Azreya, Aztec Priestess
The Twins of Moon
The Sea of Stars: Book 2 of The Twins of Moon
The Undead Truth of Us
A Girl's Guide to Love and Magic
No Admissions (The Infamous Frankie Lorde #3)
Daybreak on Raven Island
Something Beautiful
Something About Grandma

You are here: Sneak Peek at The Greatest Zombie Movie Ever by Jeff Strand + Giveaway