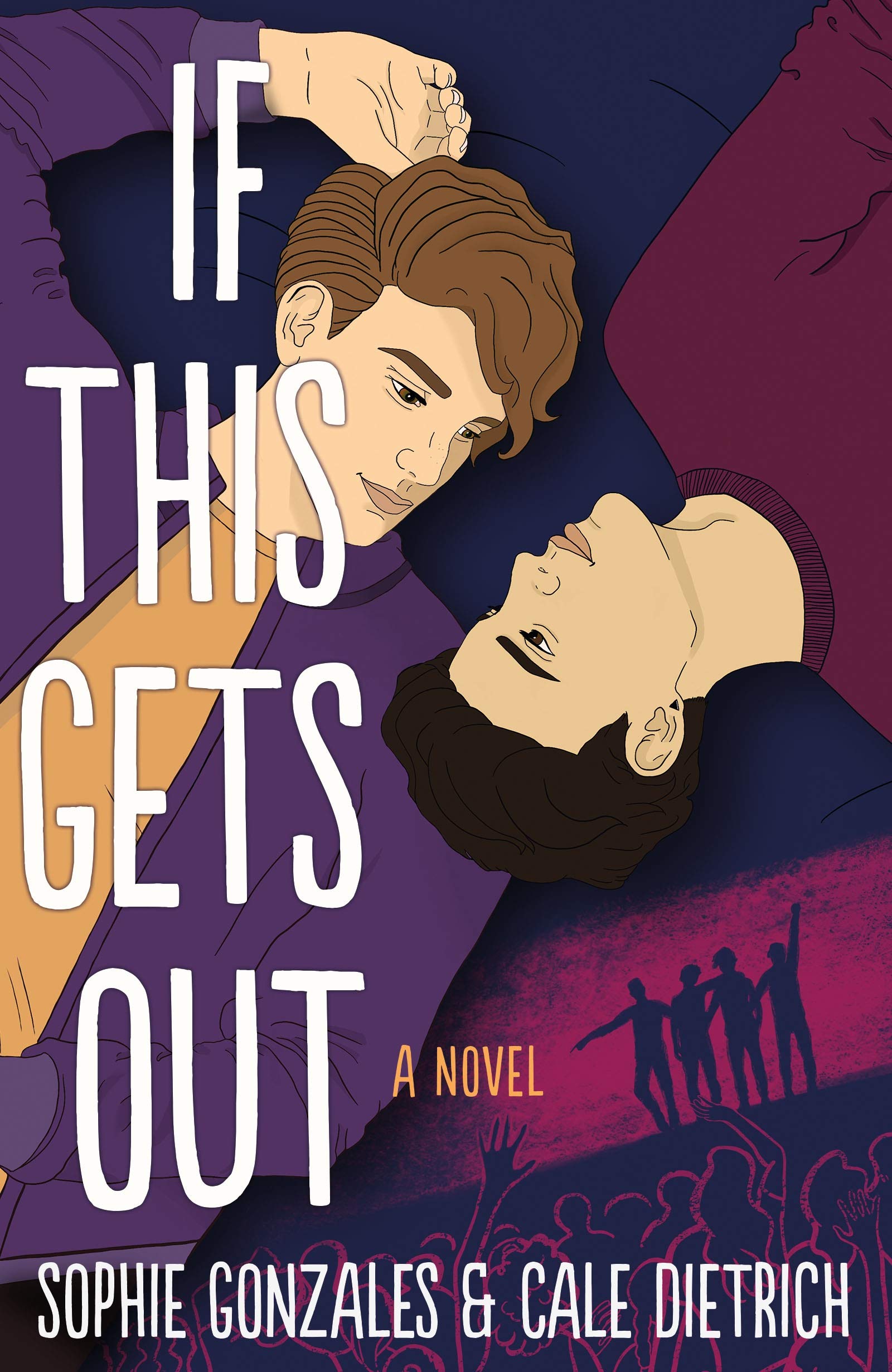 Today we get a sneak peak at an excerpt from If This Gets Out by, Sophie Gonzales and Cale Dietrich!

Read on for more about Sophie & Cale, their book, and a giveaway!

SOPHIE GONZALES lives in Adelaide, Australia. When she isn’t writing, she can be found ice skating, performing in musical theatre, and practicing the piano. She is the author of The Law of Inertia, Only Mostly Devastated, and Perfect on Paper.

CALE DIETRICH is a YA devotee, lifelong gamer, and tragic pop punk enthusiast. He lives in Brisbane, Australia. His debut novel, The Love Interest, was named a 2018 Rainbow List Selection. He is also the author of The Friend Scheme.

About: IF THIS GETS OUT

Eighteen-year-olds Ruben Montez and Zach Knight are two members of the boy-band Saturday, one of the biggest acts in America. Along with their bandmates, Angel Phan and Jon Braxton, the four are teen heartthrobs in front of the cameras and best friends backstage.

But privately, the pressure to stay in the closet has Ruben confiding in Zach.

On a whirlwind tour through Europe with an unrelenting schedule and minimal supervision, the two come to rely on each other more and more, and their already close friendship evolves into a romance. But when they decide they’re ready to tell their fans and live freely, Zach and Ruben realize they will never truly have the support they need.

How can they hold tight to each other when their whole world is coming apart?

If This Gets Out (Sophie Gonzales and Cale Dietrich)

Almost plummeting to my death before a stadium full of screaming people is a warning sign, in an endless parade of warning signs lately, that I need more sleep.

We’re performing the last concert for the American leg of our Months by Years tour when it happens. I’m about fifteen feet above the stage, on a raised platform illuminated to look like a city skyline. It’s time to gracefully lower ourselves to sit on the edge to croon the start of our last song, “His, Yours, Ours,” but instead of gracefully lowering myself, I overshoot my step, overcorrect, then start lurching over the edge.

Before I can lean too far into thin air, a hand clasps my shoulder and steadies me. Zach Knight, one of the other three members of Saturday. His hazel eyes widen the tiniest bit, but otherwise he acts unruffled. Nothing to see here.

him, because stage smoke—intended to represent either clouds or city pollution, I never did figure it out—is engulfing us, and the opening chords of the song have started. Zach keeps his hand on my shoulder while he sings, as though it was all part of the choreography, and I lean into my off-balance pose, totally collected. At least, outwardly.

After twenty-seven and a half consecutive shows this year alone, this isn’t exactly the first time one of us has had to smoothly cover up a trip or choreo mistake. It is the first time one of those mistakes almost caused me to plunge fifteen feet onto solid ground, though, and my heart’s probably never pounded quite this hard, but we’re a show.

To be clear: we aren’t giving a show: we are the show. And

the show doesn’t take two minutes to compose itself after almost breaking its neck.

The show is suave, and in control, and it meant to do that.

When Zach’s lines are over, he gives my shoulder a quick squeeze—the only acknowledgment the whole ordeal is likely to get for now—then drops his hand while Jon Braxton chimes in for his verse. Jon always has the most solo parts. I guess that’s what you get when your dad also happens to be the manager of your band. We don’t really have a leader, but if we did, it would be Jon. When we have eyes on us, anyway. By the time Jon’s finished and it’s my turn to sing the song’s bridge, my breathing’s more or less steady again. Not that it matters—every song, without fail, I get given the simplest so- los without a high note in sight. Frankly, I could pull them off with a sock stuffed in my mouth. They don’t care that I have the highest range out of all four of us. For reasons they’ll never care to explain to me, they prefer me bland. “They” being our management team and, to a lesser extent, our record label—

And god forbid I push against those cramped boundaries with a vocal run or tempo change. We’re meant to sound just like we do on the master recording. Planned, packaged, and neatly presented.

Still, inhibited vocals or not, the crowd seems to explode with energy when I sing—the blinding camera flashes that dot

the vast blanket of the crowd become frenzied, the technicolor glowsticks are waved with more abandon, and the hundreds of marry me, ruben montez posters are raised up higher. It’s only my perception, I’m sure, but when I’m singing solo, everything locks into place. It’s just me and the crowd, vi- brating at exactly the same frequency.

Right now, I could stand here forever, singing the same, safe line on repeat, hearing the same screams, seeing the same signs, and forever would feel like a moment.

Then Angel Phan takes the song’s pre-chorus line in his husky, breathy tone, the backing music drops to a whisper, and the stage is plunged into darkness. Like we’ve done doz- ens of times before, we get up in unison and stand on our assigned glow-in-the-dark X’s as the skyline platform is low- ered back down to the stage. As soon as I step off and my feet are back on level ground, I relax.

It’s short-lived. Suddenly, laser lights rip through the dark- ness as the chorus instrumental, with its upbeat tempo change, booms. They illuminate us and the audience in crisscrossing lines of fluorescent green and blue, and we launch into the chorus half-dazzled.

Book’s Title: If This Gets Out

Tags: Excerpt & Giveaway, If This Gets Out, Sophie Gonzales and Cale Dietrich, Wednesday Books

5 thoughts on “Sneak Peak Excerpt: If This Gets Out (Sophie Gonzales and Cale Dietrich), Plus Giveaway! ~US ONLY”

You are here: Sneak Peak Excerpt: If This Gets Out (Sophie Gonzales and Cale Dietrich), Plus Giveaway! ~US ONLY