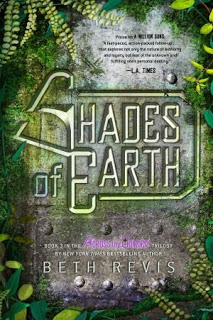 Today we’re celebrating the upcoming launch of SHADES OF EARTH, the third and final book of the NY Times Bestselling Across the Universe series by Beth Revis.

“A tense and delicious ride–one that satisfyingly brings the series full circle.” —The Examiner

Amy and Elder have finally left the oppressive walls of the spaceship Godspeed behind. They’re ready to start life afresh–to build a home–on Centauri-Earth, the planet that Amy has traveled 25 trillion miles across the universe to experience. But this new Earth isn’t the paradise that Amy had been hoping for. Amy and Elder must race to uncover who–or what–else is out there if they are to have any hope of saving their struggling colony and building a future together.

But as each new discovery brings more danger, Amy and Elder will have to look inward to the very fabric of what makes them human on this, their most harrowing journey yet. Because if the colony collapses?

Then everything they have sacrificed–friends, family, life on Earth–will have been meaningless. 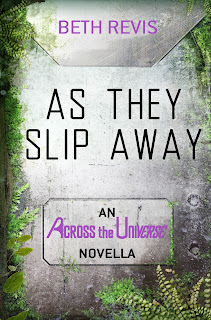 And in order to celebrate the launch, Beth has a special surprise for us! Not only can you enter to win one of five sets of her books, signed, but you can also read a free exclusive novella set on the generation spaceship Godspeed. Fans of the books will definitely recognize characters–including the star of the novella, a girl named Selene, who was mentioned in the background of both of the first two books. What happened in her past influenced both Amy and Elder’s futures, although neither of them realized it. This tragic story sheds light on many readers’ favorite character–Harley–as well as the most-hated character of all: Luthor. If you ever wondered what life was like on Godspeed before Amy woke up, and just how far Eldest was willing to go to maintain the peace on the ship, you’ll find the answers in this novella!

Every day this week, a new section of the novella will be revealed. For the full schedule, check Beth’s website. You can read today’s selection below–and don’t forget to enter the drawing at the bottom of the post!

Want to pre-order SHADES OF EARTH before the release on January 15?

As They Slip Away, Part 3

You are here: Shades of Earth Blog Tour