I am thrilled to be hosting a spot on the NOTHING INTERESTING EVER HAPPENS TO ETHAN FAIRMONT by Nick Brooks Blog Tour hosted by Rockstar Book Tours. Check out my post and make sure to enter the giveaway! 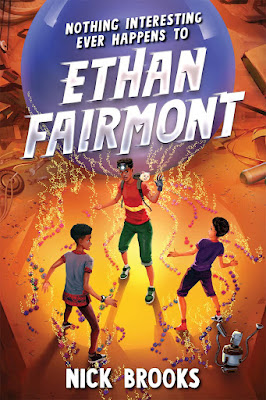 Title: NOTHING INTERESTING EVER HAPPENS TO ETHAN FAIRMONT

Something cool happening in Ferrous
City? Not a chance.

Until one day . . . when self-proclaimed genius inventor Ethan
Fairmont runs into an abandoned car factory to avoid a local bully and
accidentally stumbles across his ex-best friend Kareem, new kid Juan Carlos,
and an extraterrestrial visitor. Cheese (the alien) is stuck on Earth in need
of some serious repairs, spicy snacks—and absolute, total secrecy. That’s
easier said than done when mysterious agents descend on Ferrous City to search
for Cheese. With time running out and their family and friends in potential
danger, can Ethan, Kareem, and Juan Carlos pull off an intergalactic rescue
before they’re all found out?

“An inventive story with a lot of
heart.” — Kirkus Reviews

Ethan grew out of a conversation I had with Cake Creative, a launchpad for young writers. Founder Dhonielle Clayton and I spoke about the need to center Black and Brown boys in sci-fi and Dhonielle wanted to tell a story featuring a young Black inventor. Instantly I was hooked on the concept because it’s a character we don’t get to see often but one that reminds me a lot of myself when I was a kid. Nothing Interesting Ever Happens to Ethan Fairmont pays homage to film classics like E.T. and Short Circuit, and hopefully, Ethan will inspire a new generation of young readers the way those films inspired me.

I’m really proud of the police aftermath. I think “the conversation” scene around police brutality in Black and Brown communities is so necessary but so heavy. I feel I approached it in a way that delivered the emotional punch without making the circumstance feel traumatic. A delicate balance!

This is a great question, and I think I’ve learned to trust my gut. It’s so easy to overthink and over complicate. The pressure isn’t good for the creative process. I’ve learned to relax, let the words come, and trust that they’re at least in the right ballpark of what I’m trying to say.

I love the air of danger, that’s always fun. And the small details, like Ethan and his gloves or Juan and his missing shoe.

Nothing Interesting Ever Happens to Ethan Fairmont,  naturally.

I really enjoyed, Stuntboy, In The Meantime by Jason Reynolds.

My first YA novel, Promise Boys, releases January 2023. I’m writing my first TV show, which will be announced next year. And I’m preparing to direct my first feature film!

Thank you for having me. Keep in touch and be sure to follow the Ethan series!

Cheese was actually pretty tough to crack. Trying to nail down the way he would communicate was challenging because… well because he’s not from this planet!

I really enjoy both, they work different parts of my brain. I’ll say revising is a muscle I can work more often. Drafting requires a bit more brain power, for me.

I’m all about the young people who come from inner city communities like I did. I think they need advocates, and the wealth, achievement, and opportunity gaps will not close unless we ALL commit to playing our part in closing them. 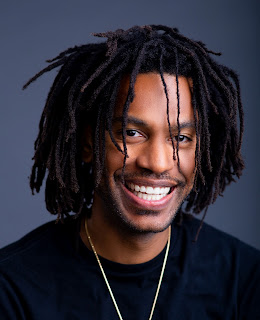 Nick Brooks is an
award-winning filmmaker and writer. His short film Hoop Dreamin’ earned
him the George Lucas Scholar Award and was a finalist in the Forbes 30 Under 30
Film Fest. His short film Bee won the James Bridges and Jack Larson
Award for Writing and Directing and premiered at the American Black Film
Festival. In 2016, Nick created and launched his children’s books series, The
Adventures of Yani. The series gained national attention and is currently used
at schools across the country. This is his debut middle-grade novel. Nick
currently lives in Los Angeles, California; he’s originally from Washington,
DC.

1 winner will receive a finished copy of NOTHING INTERESTING EVER HAPPENS TO ETHAN
FAIRMONT, US Only.

2 thoughts on “Rockstar Tours: NOTHING INTERESTING EVER HAPPENS TO ETHAN FAIRMONT (Nick Brooks), Interview & Giveaway! ~US ONLY”

You are here: Rockstar Tours: NOTHING INTERESTING EVER HAPPENS TO ETHAN FAIRMONT (Nick Brooks), Interview & Giveaway! ~US ONLY