I am thrilled to be hosting a spot
on the BRAVELY by Maggie Stiefvater Blog Tour hosted by Rockstar Book Tours. Check out
my post and make sure to enter the giveaway! 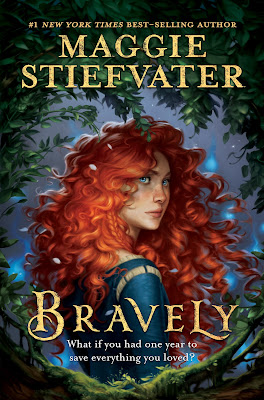 What if you had one year to save everything you loved?

ONE PRINCESS. Merida of DunBroch needs a change. She loves her
family—jovial King Fergus, proper Queen Elinor, the mischievous triplets— and
her peaceful kingdom. But she’s frustrated by its sluggishness; each day, the
same. Merida longs for adventure, purpose, challenge – maybe even, someday,
love.

TWO GODS. But the fiery Princess never expects her disquiet to manifest
by way of Feradach, an uncanny supernatural being tasked with rooting out rot
and stagnation, who appears in DunBroch on Christmas Eve with the intent to
demolish the realm – and everyone within. Only the intervention of the
Cailleach, an ancient entity of creation, gives Merida a shred of hope:
convince her family to change within the year – or suffer the eternal
consequences.

THREE VOYAGES. Under the watchful eyes of the gods, Merida leads a
series of epic journeys to kingdoms near and far in an attempt to inspire
revolution within her family. But in her efforts to save those she loves from
ruin, has Merida lost sight of the Clan member grown most stagnant of all –
herself?

FOUR SEASONS TO SAVE DUNBROCH – OR SEE IT DESTROYED, FOREVER.

This is a story about two gods and a girl.

It takes place a very long time ago, when Scotland was only beginning to be called Scotland, at a castle called DunBroch.

The first god, the Cailleach, was very old. In fact, one of her other names was the Old Woman of Scotland, although most humans never saw her in that form. Instead, those with the Sight merely felt her invisible presence in a wild storm or a rushing waterfall or even in the melted snow that pools in fresh-plowed spring fields. The Cailleach was a goddess of creation. She made trees bud. Grass thicken. Calves grow inside cows. Fruit ripen on the vine. Her work was the ancient business of making and renewing.

Oh, she was a wily old woman.

She was a rule-bending, shape-shifting, trick-playing, truth-splitting old crone and she’d do whatever she could to get her way.

The second god, Feradach, was very young. It wasn’t that he hadn’t been around as long as the Cailleach, because he had, in his own way. But unlike the Cailleach, who had the same physical form every time she became visible, Feradach appeared as something different to every person who saw him. It meant he was always learning himself new, over and over and over, a kind of eternal youth.

Feradach was a god of ruin. His work was the ancient business of destruction. Under his attention, fires seared landscapes, plagues harrowed communities, and floods erased civilizations.

Together, they kept the balance.

Unfortunately, they didn’t always agree on what the balance required. Or rather, the Cailleach didn’t always agree. Young Feradach was unflinchingly fair, because it’s easier to have unclouded justice before experience complicates things. The Cailleach, on the other hand, was old enough to have preferences. Biases. Favorites. This meant that sometimes, even when ruin was perfectly merited, she wanted her side to win instead.

And that was usually when she cheated. She’d been playing tricks on Feradach for ages.

Some years she managed to save a warrior or a family or even an entire village from him in this way. Some years, she lost them all. Some years, when the tricks didn’t work, she used a miracle, although she didn’t get many of those to spend. The Cailleach was old, but wherever the miracles came from was even older, from a deep part of Scotland that has always favored healing and creation. Miracle years were rare ones.

This story takes place in a miracle year.

On the day it begins, DunBroch looked particularly splendid on its perch above the glittering loch. In that sharp winter weather, everything that wasn’t green and red was black and white. Black water, white-heaped shore. Black road to the castle, white-shouldered bracken on either side. Black walls, white-capped battlements. A powdered sugar layer of snow rendered all the courtyard’s divots smooth as an iced bun. Red berries popped brightly in the holly and bay leaf boughs hung over every threshold. Old green banners flapped elegantly from the tall towers.

DunBroch was getting ready for a Christmas wedding. Yes, they had Christmas back then, and weddings, too, although neither looked exactly as they do now. The part of weddings we spend a lot of time on these days—the bride and the groom, the picking of flowers and matching of dresses, showers and stag parties, flower girls and ring boys, the kiss, the kiss—that was the least involved part back then. A DunBroch wedding ceremony was just a couple quickly exchanging a ring or a broach in front of a cleric, then getting on with it all. No kiss. No romance. Just a perfunctory transaction. But the reception —the celebration that came after—now that was really something. It could go on for days. Pantomime plays, courtly dancing, feats of strength, silly games, and, of course, the food. The food, oh the food! To modern eyes, it would have looked much more like a festival than a wedding.

Now, a DunBroch Christmas was more like its modern-day cousin. The Christmas turkey was more likely to be a boar or a swan, and the board games played before fire were ones that have long since gone extinct, but the seasonal trimmings were the same. Holly wreaths and ivy boughs, mischievous mistletoe and merry carols, twelve short winter days of gifts, twelve long winter nights of treats and spiced wine. It was a natural companion to the revelry of wedding feasting.

The Christmas wedding was Leezie’s. Foolish, lovable young Leezie, who had been a member of the DunBroch household staff so long that she was like family. She loved ritual and religion. The Christians, the druids, the Jews, the witches, the Cisterians, the Lads of Cernunnos, the Ladies of the Morrigan, the Tironensians, the Cluniacs, she had tried them all. Recently, she’d dedicated herself to Minerva, the Roman goddess of wisdom and crafts, and spent weeks weaving and writing songs about owls. It was a trying time. Luckily she’d moved on to astrology and then, onto getting married. Leezie had always wanted a Christmas wedding—a perfect combination of ritual and religion— and now she’d finally found a man to star in it with her. The others at DunBroch called him the Cabbage.

Cabbage is not exciting, but it is nutritious. He would do.

Leezie is not the girl this story is about, however. It is about another DunBroch girl.

Now, there are three DunBrochs: the castle DunBroch, gazing watchfully over the wooded hillsides. The kingdom DunBroch, with its lochs and burns, its lowland fields and highland shielings, its coven of white-haired mountains and sliver of black-tongued sea. And the Clan DunBroch: King Fergus, Queen Elinor, Princess Merida, and three triplet princes, Hubert, Harris, and Hamish.

This story belongs to the Princess Merida.

Merida was less like the mannered royal you’re imagining and more like a struck match, although matches did not yet exist. Red hair, keen eyes, quick brain, built to start fires but not to put them out. She was an absolute wizard with a bow and arrow. For over a decade, before the wee devil triplet princes arrived, she’d been the only child, and where other children might have had friends, Merida had her bow. She practiced her archery breathlessly, automatically, in every moment her mother hadn’t scheduled her for lessons in embroidery, music, and reading. There was a stillness to archery she couldn’t get anywhere else. Whenever she had a problem she couldn’t solve, she went out to practice. Whenever she had a feeling she didn’t understand, she went out to practice. Hours upon hour, she collected calluses on fingertips and bruises on forearms. At night, when she dreamt, she still sighted between trees and adjusted for strong highland winds.

In the months before the wedding, Merida took her bow and traveled the kingdom. In spring she’d gone with the villagers and their herds up to the temporary bothies in the shielings. In late summer she went down to Morventon to study letters and geography with the nuns. By fall, she was traveling with a handful of her father’s old confidantes who had vowed to map the varied terrain of DunBroch.

In winter, she returned for Leezie’s wedding. She hung up her bow. How safe and unchanged she found DunBroch after her months of wandering.

She didn’t know that Feradach—and disaster— was approaching.

But the Cailleach knew. That wily old goddess.

She also knew that DunBroch had earned Feradach’s ruin. But the Cailleach was old, and she was biased, and she had a stake in the Clan DunBroch.

This is that story. 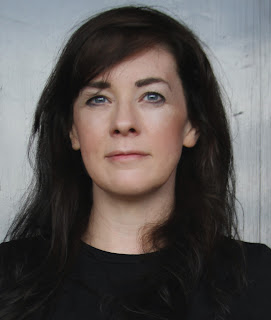 Maggie Stiefvater is the #1 New York Times bestselling author of The
Raven Cycle, the Shiver trilogy, and other novels for young and adult readers. She is
also an artist, an auto enthusiast, and a bagpiper. She lives on a farm in the Shenandoah Valley
with her husband, two children, and an assortment of fainting goats.

1 winner
will receive a finished copy of BRAVELY, US Only.

You are here: Rockstar Tours: Bravely (Maggie Stefvater) Excerpt & giveaway! ~US Only