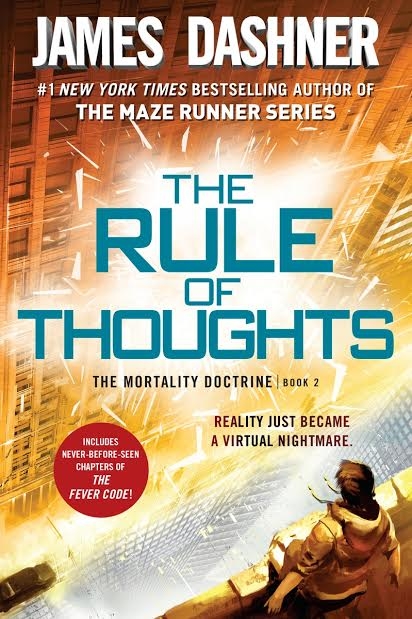 The Rule of Thoughts

Includes bonus content from the forthcoming prequel to the Maze Runner series, The Fever Code

Praise for the Mortality Doctrine series:

“Dashner takes full advantage of the Matrix-esque potential for asking ‘what is real.’” —io9.com

“Set in a world taken over by virtual reality gaming, the series perfectly capture[s] Dashner’s hallmarks for inventiveness, teen dialogue and an ability to add twists and turns like no other author.” —MTV.com

Now available in paperback for the first time is THE RULE OF THOUGHTS (Ember / on sale May 3, 2016 / Ages 12 & up), the second book in bestselling author James Dashner’s the Mortality Doctrine series. Retailing at $9.99, and with special bonus content from the eagerly anticipated novel and prequel to the Maze Runner series, The Fever Code (on sale September 27, 2016), this edition is a must-have for all Dashner fans, whether new or established.

At the close of The Eye of Minds, Michael completed the Path. What he found at the end turned everything he’d ever known about his life—and the world—completely upside down. He barely survived, but it was the only way VirtNet Security knew to find the cyber-terrorist Kaine—and to make the Sleep safe for gamers once again. The truth Michael discovered about Kaine, though, is more complex than they anticipated, and more terrifying: Kaine is a Tangent, a computer program that has become sentient. And Michael’s completing the Path was the first stage in turning Kaine’s master plan, the Mortality Doctrine, into a reality. The Mortality Doctrine will populate Earth entirely with human bodies harboring Tangent minds. Any gamer who sinks into the VirtNet risks coming out with a Tangent intelligence in control of their body. And the takeover has already begun. . . .

The third novel in the Mortality Doctrine series, The Game of Lives, was published in fall 2015. James Dashner’s books have sold nearly 15 million copies across all formats in North America.

JAMES DASHNER is the author of the New York Times bestselling Maze Runner series, as well as the Thirteenth Reality series and two books in the Infinity Ring series. A former CPA, Dashner is now a full-time writer, creating novels that legions of readers have enjoyed. He lives with his family in Utah. Follow James on Twitter at @JamesDashner, on Instagram, and on Facebook at Facebook.com/jamesdashnerbooks.

THE RULE OF THOUGHTS by James Dashner

Also available as a hardcover, eBook, and audiobook from Listening Library

You are here: Press Release: The Rule of Thoughts by James Dashner