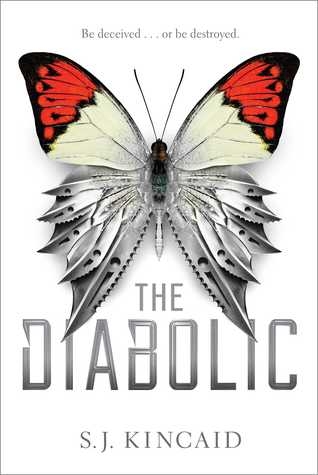 With 100,000 Books in Print, Publisher Moves to Satisfy Reader and Bookseller Demand

New York, New York, December 13—Simon & Schuster Books for Young Readers, an imprint of Simon & Schuster Children’s Publishing, announced today that it will publish two more books in the galactic YA Diabolic series by S. J. Kincaid, based on domestic and international sales and an incredible reaction from readers. The second book in the Diabolic series will publish in Fall 2017, followed by book three in Fall 2018.

A New York Times bestseller, The Diabolic has 100,000 books in print in North America and will be published in twenty-two foreign territories. Sony Pictures owns The Diabolic movie rights and Matt Tolmach will produce (see Deadline.com).

“Originally, I wrote The Diabolic as a stand-alone book,” said Kincaid. “But so many ideas about what might follow the events of that book kept rushing into my head. It was wonderful to see so many readers who also wanted more of my characters, so I am absolutely thrilled to be working with Simon & Schuster for two more Diabolic novels!”

“Nearly every review for The Diabolic expressed the need for more books,” said Justin Chanda, Vice President, Publisher of Simon & Schuster Books for Young Readers. “When I posed the question to S. J., I was thrilled to learn that she had the perfect idea for how the story could and should continue. I can’t wait to dive back in!”

Shortly after the events of book one, a new Emperor has ascended to power. Nemesis, the Diabolic, has a new mission. She must save the one she loves from the most dangerous people in their galaxy—or face saving the galaxy from its own emperor.

S. J. Kincaid’s previous publications include the 2012 YA sci-fi book Insignia, its 2013 sequel Vortex, and the 2014 Catalyst. Insignia won the Alabama Young Adult Fiction Award, was short-listed for the Waterstones Prize, was a selection for the Texas Lone Star Reading List, and was featured on the 2013 YALSA Best Fiction for Young Adults list. S. J. was born in Alabama, grew up in California, and now lives outside of San Francisco.

Chanda, who will edit the books, acquired world rights to the two novels from Holly Root of the Waxman Leavell Literary Agency.