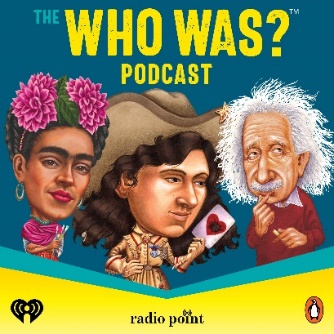 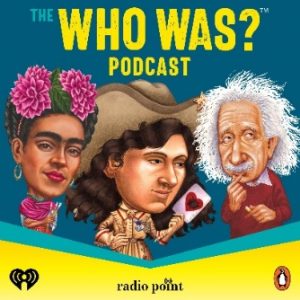 Based on the bestselling Who Was? non-fiction children’s book series and award-winning Netflix show

March 16, 2022 – New York, NY – Penguin Workshop, iHeartMedia, and Radio Point are proud to release The Who Was? Podcast, a new kids’ comedy quiz show, from the team that produced the Emmy Award-winning Netflix series, The Who Was? Show and based on the #1 New York Times-bestselling Who Was? children’s history and biography series from Penguin Workshop, an imprint of Penguin Young Readers. The first series, consisting of 45 weekly 30-minute episodes, premiered with its first two episodes on March 16, 2022.

Co-hosted by Elliot Kalan and Meghan O’Neill, each episode of the comedy quiz show podcast features games, fun facts, and sketches about trailblazing historical figures that will keep listeners laughing and learning.  Each episode revolves around two historical figures that have been paired together for obvious, and sometimes not so obvious, reasons.  Contestants between the ages of 8-12 years old will join in a friendly competition for a chance to be rewarded with a selection of Who Was? books and a set for their school library.

“The success of The Who Was? Show on Netflix helped us realize all the different ways Who HQ could spark a curiosity for history outside of a traditional biography format,” said Francesco Sedita, President and Publisher of Penguin Workshop. “As we continue to expand our title list to include Board Books, Graphic Novels, and more, we are beyond thrilled to partner with iHeart, Radio Point, and the fantastic team behind The Who Was? Show to bring engaging history to young podcast listeners and their families.”

“Who Was?” has been an amazing kids’ franchise for years now, and we’re excited to team up with Penguin Workshop and Radio Point to bring this series into podcasting,” said Will Pearson, COO of iHeartPodcasts. “The podcast world needs a laugh-out-loud kids quiz show and we’re thrilled to give our listeners something they can enjoy with their families.”

Two fierce kid competitors test their knowledge of science rockstar Marie Curie and delish chocolate maker Milton Hershey! But the real winner today is our host Elliott who walks away with a brand new middle name!

Other historical figure pairings covered in The Who Was? Podcast include:

The Who Was? book series began in 2002 with the publication of just four books. Since then, it has evolved into a brand encompassing over 300 titles across seven series lines (including Who HQ Now, Who Was? Graphic Novels, Who Was?, What Was?, Where Is?, What Is the Story Of?, and Who Was? Board Books, known collectively as Who HQ), a Podcast, and a Netflix original series. With more than 50 million books in print worldwide, it’s now the #1 nonfiction series for middle-grade readers; every 13 seconds, a Who HQ book is sold. For more information about the series, including a list of titles, visit www.whohq.com.

Co-host Elliott Kalan is an Emmy and Peabody Award-winning writer and comedian who has done most of the following things: been Head Writer of The Daily Show with Jon Stewart and Mystery Science Theater 3000; written the picture books Horse Meets Dog and Sharko and Hippo; contributed to the bestselling Earth: The Book; co-hosted the popular podcasts The Flop House and Presidents Are People, Too!.

Radio Point, iHeartMedia, Penguin Workshop, and Meghan O’Neill will serve as Executive Producers on the show. The Who Was Podcast? Is distributed by the iHeartPodcast Network.

Children ages 8-12 have a chance to win a selection of Who Was? Books and a set for their school library on the Who Was? Podcast! Parents can email [email protected] for casting information.

Penguin Workshop, an imprint of Penguin Young Readers, publishes new voices and established brands for readers ages birth-12. The imprint is home to popular and bestselling middle grade series such as Here’s Hank by Henry Winkler and Lin Oliver, Klawde by Johnny Marciano and Emily Chenoweth, Brian McCann’s Wannabe Farms, and Who HQ, which has more than 50 million copies in print worldwide. The imprint also publishes pioneering picture books such as Jessica Hische’s Tomorrow I’ll Be Brave.

iHeartMedia, Inc. [Nasdaq: IHRT] is the leading audio media company in America, reaching over 90% of Americans every month. iHeart’s broadcast radio assets alone have more consumer reach in the U.S. than any other media outlet; twice the reach of the next largest broadcast radio company; and over four times the ad-enabled reach of the largest digital-only audio service. iHeart is the largest podcast publisher according to Podtrac, with more downloads than the next four podcast publishers combined and has the number one social footprint among audio players, with seven times more followers than the next audio media brand, and the only fully integrated audio ad tech solution across broadcast, streaming and podcasts.  The company continues to leverage its strong audience connection and unparalleled consumer reach to build new platforms, products and services. Visit iHeartMedia.com for more company information.

Radio Point is the podcasting venture from Irony Point, veteran television producer Rich Korson, and audio producer Houston Snyder of Great City Post. Radio Point has released its first six podcasts and has numerous podcasts in various stages of production and development. Ellie and the Wave, their first scripted podcast (starring Natalie Morales, Paul Scheer, and June Diane Raphael) was released with Himalaya Media in August of 2019. They have since released various scripted and unscripted formats across genres. These projects include The Sketch Factor with Fred Armisen for Spotify, Make My Day with Josh Gondelman, Ruined with Halle Kiefer and Alison Leiby, Election Profit Makers with Starlee Kine, David Rees, and Jon Kimball and A Good Cry with Michael Cruz Kayne.

You are here: PRESS RELEASE: Penguin Workshop and iHeartMedia Release Kid’s Comedy Quiz Show, The Who Was? Podcast