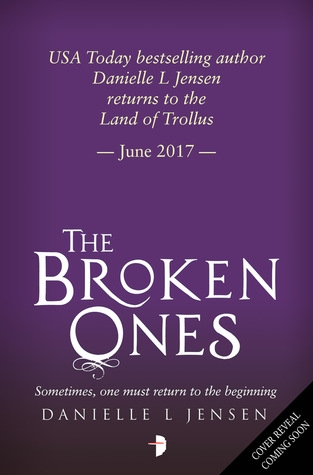 Angry Robot is excited to announce we will be releasing a new novel by Danielle L. Jensen titled The Broken Ones in June of 2017. A prequel to the USA Today bestseller Stolen Songbird (The Malediction Trilogy), The Broken Ones chronicles the ill-fated love affair between Marc and Pénélope as they struggle to navigate the complex political world of Trollus, where powers on all sides are intent on using them as pawns. Tamar Rydzinski at the Laura Dail Literary Agency negotiated the deal for World English rights. USA Today bestselling author Danielle L. Jensen was born and raised in Calgary, Canada. At the insistence of the left side of her brain, she graduated from the University of Calgary with a bachelor’s degree in finance. But the right side of her brain has ever been mutinous, and it sent her back to school to complete an entirely impractical English literature degree at Mount Royal University. Much to her satisfaction, the right side shows no sign of relinquishing its domination.

Meet The Broken Ones! Cécile has only one thing on her mind: escape. But the trolls are clever, fast, and inhumanly strong. She will have to bide her time…

But the more time she spends with the trolls, the more she understands their plight. There is a rebellion brewing. And she just might be the one the trolls were looking for… Three winners will each receive a signed set of The Malediction Trilogy (Stolen Songbird, Hidden Huntress, and Warrior Witch) + bookmarks

You are here: Press Release & Giveaway: The Broken Ones (Danielle L Jensen)