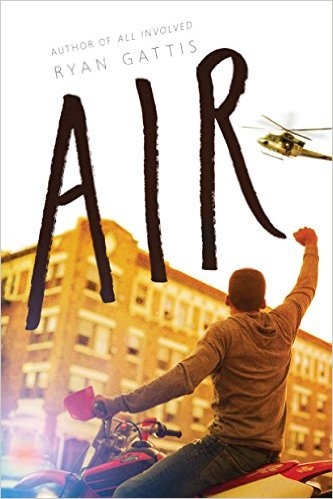 The wide release of the captivating and timely novel “AIR” by Ryan Gattis hits shelves on December 6th and next year there will be a feature film adaption of the book in production which musician John Legend has signed on to produce.

The story is a fascinating look at a young kid, Grey, in inner-city Baltimore who turns to BMX biking as a form of social activism.  Grey and his friends challenge police corruption and prejudice with their death-defying stunts, posting videos to YouTube.  It’s a fictionalized take on the real #blacklivesmatter movement.

Synopsis: When 17-year-old Grey witnesses the tragic death of his mother in Colorado, he is shipped off to live with his aunt in inner-city Baltimore. Grey struggles to fit in to his new school and environment until his new friend, Akil, introduces him to the enigmatic Kurtis, the leader of a group that uses high-octane sports as a form of social activism. By challenging the police with death-defying stunts and then posting videos of them online, Kurtis, Grey, and their group become unlikely heroes in the fight against the prejudice that surrounds them.

As Kurtis takes Grey under his wing, they come up with a name, an insignia and attract more and more followers to their extreme acts. The lines between social activism and criminal behavior blur and their escalating stunts become a rallying point for the underprivileged and disenfranchised around the country, spreading like wildfire across the Internet. How far will Grey and Kurtis go to push their message, and can their fragile alliance withstand their growing power?

You are here: Press Release: Book Trailer for Air