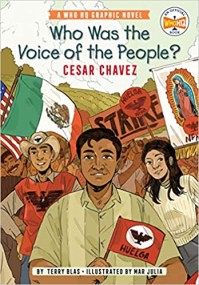 Presenting Who HQ Graphic Novels: an exciting new addition to the #1 New York Times Best-Selling Who Was? series!

Follow Cesar Chavez and the National Farm Workers Association, as they set out on a difficult 300-mile protest march in support of farm workers’ rights. A story of hope, solidarity, and perseverance, this graphic novel invites readers to immerse themselves in the life of the famous Latino American Civil Rights leader — brought to life by gripping narrative and vivid full-color illustrations that jump off the page.

The boycott of grapes in 1966, and the social activism at the time, is very interesting to see covered, and the Who Was books are something that my students ask for a lot because they’ve read them in elementary school. This graphic novel not only tells about Chavez’s life, but about this time period. It concentrates especially on the march from Delano, California to the capitol. Chavez was injured the first day, and the group struggled along the route, sleeping outside at farms on their way. There are some explanations in straight text, which was helpful, and a good conclusion as well as a timeline at the end. A short bibliography is included.
Good Points
A few years ago, there was an exhibit at the Smithsonian on the labor movement, and I was thrilled to see a section of it involving the Latine community and leaders like Chavez and Dolores Huerta, who is the subject of Brill’s 2018 Dolores Huerta Stands Strong : The Woman who Demanded Justice. It’s such an important topic and one that even I, a child of the 1970s, didn’t know a lot about. History topics can be a hard sell for young readers, but graphic novels are a great way to deliver these topics. Don Brown’s The Great American Dust Bowl and Bermudez’s Big Apple Diaries are great examples of this.

I liked the illustration style, and the feel of the 1960s was captured well. The palette was tans and browns, with some dusky greens, which gave an agricultural feel to the book. I also loved the grape border on some of the text.

There is a whole series of Who HQ Graphic Novels, and the series also highlights Neil Armstrong, Rosa Parks, and Amelia Earhart. It’s good to see occasional figures like Chavez and the 14th Dalai Lama, who don’t already have a lot of books about them, get a biographical treatment for young readers, and I hope that Penguin will include other lesser known but historically important individuals in future biographies.

You are here: Middle-Grade Review: Who Was the Voice of the People? Cesar Chavez by Terry Blas