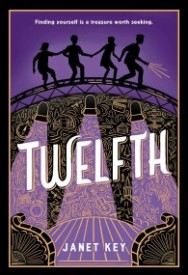 Twelve-year-old Maren is sure theater camp isn’t for her. Theater camp is for loud, confident, artsy people: people like her older sister, Hadley—the last person Maren wants to think about—and her cinema-obsessed, nonbinary bunkmate, Theo. But when a prank goes wrong, Maren gets drawn into the hunt for a diamond ring that, legend has it, is linked to the camp’s namesake, Charlotte “Charlie” Goodman, a promising director in Blacklist Era Hollywood.

When Maren connects the clues to Shakespeare’s Twelfth Night, she and her new friends are off searching through lighting booths, orchestra pits, and costume storages, discovering the trail and dodging camp counselors. But they’re not the only ones searching for the ring, and with the growing threat of camp closing forever, they’re almost out of time.

What worked:
The book has an effective hook right from the start, as the acting instructor for a summer theater camp disappears. The other counselors and the camp’s owner have no idea what’s happened, and it creates a mystery. The mystery deepens once she’s found and reveals she’d been kidnapped and interrogated for information. Apparently, someone believes a valuable diamond is hidden somewhere in the camp, and the kidnapping adds an element of danger to the problem.
The main plot follows Maren and Theo as they deal with the mystery, the day-to-day drama of camp life, and the preparations for the camp’s production of Shakespeare’s “The Twelfth Night”. It’s Maren’s first time coming to camp, reluctantly, but Theo is a camp veteran and prefers to be addressed as they or them due to being trans. Other gender identities are included in the book as related issues are addressed. For some reason, an anonymous person (or ghost) sends Maren cryptic messages related to lines in the play that will help her find the diamond. Theo agrees to help along with a couple of other campers. Maren’s character is intelligent and logical, so she’s well-prepared to take on the whodunit. Maren also deals with thoughts about her older sister’s depression and she’s forced to sort through her mixed emotions.
The book has a variety of subplots, including alternate chapters about the life of the camp founder’s daughter, Charlie. It’s revealed that Charlie’s character identifies more with males and has something to do with the missing diamond. Charlie finds it easier to live as a man, but life gets complicated when a beautiful actress enters the picture. The hidden feelings and secrets that follow lead to a tragic end. However, these characters create the mystery that Maren is trying to solve.
Theo is the most entertaining character, as they’re determined to film a movie while at camp. They carry a camera everywhere, constantly filming, and this creates an issue late in the book. Their character has an insatiable hunger, and they finish Maren’s leftovers at every meal. They wear unique, colorful vests all the time, and they have relentless energy for camp life and sleuthing. They have an ongoing conflict with a self-centered, vain girl, but Theo handles it better than her. Theo’s enthusiasm for life and solving the mystery is contagious, and readers will come to enjoy the character too.
What didn’t work as well:
The setting of a theater camp in the middle of nowhere is a bit unusual. While the story is guided by the camp’s performance of the classic Shakespeare play, not a common interest of most young people, readers can still identify with other aspects of camp life. Maren’s reflections about her sister and her friends are engaging and will help readers make personal connections.
The Final Verdict:
Be yourself. “The Twelfth Night” and the search for the missing diamond steer the story and support subplots for a myriad of intriguing characters. Their compelling issues will engage readers, and I recommend you give it a shot.

You are here: Middle-Grade Review: Twelfth by Janet Key