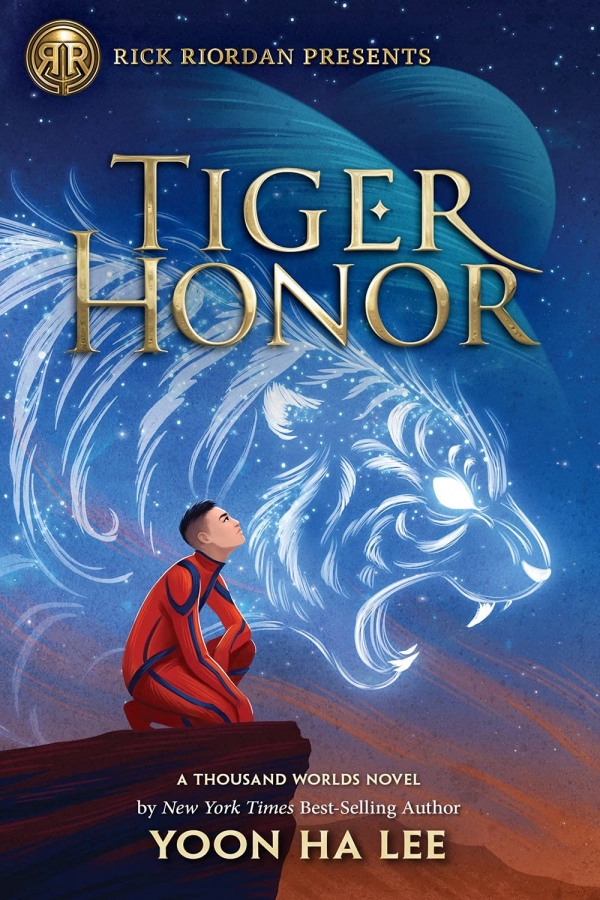 Best-selling author Rick Riordan presents Yoon Ha Lee’s companion to the best-selling and award-winning DRAGON PEARL, another space opera inspired by Korean mythology, this time told from the point of view of a nonbinary tiger spirit.

“A zesty mix of Korean folklore, magic, and science fiction that will leave you longing for more adventures in the Thousand Worlds!”–Rick Riordan, intro to DRAGON PEARL

“With crisp dialogue, a winning protagonist and a propulsive plot, this tale is enormously entertaining.”–New York Times Book Review of DRAGON PEARL

Sebin, a young tiger spirit from the Juhwang Clan, wants nothing more than to join the Thousand World Space Forces and, like their Uncle Hwan, captain a battle cruiser someday. But when Sebin’s acceptance letter finally arrives, it’s accompanied by the shocking news that Hwan has been declared a traitor. Apparently the captain abandoned his duty to steal a magical artifact, the Dragon Pearl, and his whereabouts are still unknown. Sebin hopes to help clear their hero’s name and restore honor to the clan.

Nothing goes according to plan, however. As soon as Sebin arrives for orientation, they are met by a special investigator named Yi and his assistant, a girl named Min. Yi informs Sebin that they must immediately report to the ship Haetae and await further instructions. Sebin finds this highly unusual, but soon all protocol is forgotten when there’s an explosion on the ship, the crew is knocked out, and the communication system goes down. It’s up to Sebin, three other cadets, and Yi and Min to determine who is sabotaging the battle cruiser. When Sebin is suddenly accused of collaborating with the enemy, the cadet realizes that Min is the most dangerous foe of all…

Yoon Ha Lee brilliantly turns the tables on DRAGON PEARL in another unputdownable sci-fi adventure about what honor really means.

What Really Makes Someone Honorable?
Sebin has longed to join the Thousand World Space Forces and follow in their uncle’s footsteps as a captain. Sebin has always seen Uncle Hwan as an idol, so when they are suddenly told Hwan is a traitor and not to be trusted, they don’t know what to do. While onboard their first ship as a (almost) newly minted cadet, they meet Inspector Yi and his assistant, Min. Yi and Min seem to know Hwan and are wary of Sebin because of their family tie. When an explosion suddenly hits, it becomes clear Hwan is on the ship, and he’s out for revenge. Sebin will have to decide if it is more honorable to uphold their obligation to their clan or to their intended oath to protect the Thousand Worlds.

TIGER HONOR follows the events that happened in DRAGON PEARL, but this story is through the eyes of a young tiger clan member, Sebin. I loved the inclusion of Min as a side character and getting to see more of her journey and her progress, but it was also a delight to meet Sebin and get to know them. Sebin’s tiger clan is strict about loyalty but less so about love or care for one another. Sebin wants to bring honor to the tiger clan name, but they aren’t sure to whether to believe Hwan or not. Betraying Hwan means betraying the whole clan, but following along with Hwan’s plan means compromising Sebin’s honor and what they believe is right. TIGER HONOR shows what true honor can look like and what sacrifices sometimes have to be made to follow a moral compass.

In addition to the characters, Yoon Ha Lee really brought the setting to life. Sebin is on the Haetae ship for the majority of the book. With Hwan’s attempt to take over the ship, Sebin and their friends have to carefully manage their location in relation to Hwan and his crew. Both groups are trying to hack into controls and communications, and the wrong move could put everyone in danger. While this isn’t a horror book, there were certain high spots of tension that had my heart racing like it was one.

Those who enjoyed DRAGON PEARL will love this exciting companion sequel where honor means more than who your family is.