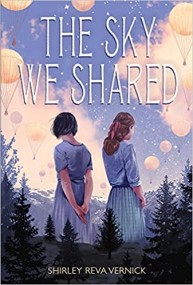 Nellie and Tamiko live on opposite sides of the world, on opposite sides of World War II. In rural Oregon, Nellie passes the time lying under the stars, wishing for her Pa to come back home, and for Joey, her next door neighbor to talk to her like they used to before his brother was killed in the war. In southern Japan, Tamiko passes the time writing in her diary, hoping one day she can work in the theater making costumes, and praying her brother Kyo will make it back home from fighting. Thousands of miles apart, the two girls share the same wish, for the war to be over. When the Japanese military recruits young girls for a secret project, Nellie and Tamiko’s lives become even more directly linked.
Tamiko and her classmates are tasked with making paper balloons. The work is arduous and relentless, and no one has told the girls how the balloons will help the military, but Tamiko believes she is doing her part to help Japan win and end the war once and for all. Nellie tries to do her part by rationing and working in salvage drives―though times are lean, and she worries for her father, the war feels worlds away. Until a paper balloon makes its way to her hometown.
Based on Japan’s Project Fu-Go during the last stretch of WWII, Falling Stars uses the alternating perspectives of Nellie and Tamiko to depict the back and forth tragedies of two countries at war. Although worlds apart, both girls understand that in a time of uncertainty and fear, blind hate for the “enemy” leaves a heavier heart and more debris. Falling Stars weaves real history with unforgettable characters who must deal with war and hatred right alongside friendship, first love, and family.

If you read only ONE WWII book this year, make it this one.

During World War II, we meet Tamiko, who lives in rural Japan in 1944 and dreams of one day sewing costumes for the theater. Her parents are dead, and she lives with an aunt. Her brother Kyo, has worked with her in the rice fields, but food is so scarce that he decides to join the army. Tamiko is not happy, but there is little she can do but send a daruma doll with him for luck. She and her friend Suki are told that they will be going to a nearby city to work on a project, and Tamiko hopes she can use her skills. When the group has to walk, she is told that she will not be going because she is somewhat lame, having had polio. She sneaks into the group and is soon working on giant paper balloons that are washi paper with potato glue. There are twelve hour shifts, only two rice balls a day, plus some amphetamine tablets, and the girls must sleep on the cold floor. Everyone works hard, hoping to aid the soldiers who are fighting for the Emperor Hirohito in his holy war.

In Oregon, in 1945, we meet Nellie. Her father is stationed in Alaska with the army, and her best friend Joey seems distant since the death of his older brother. Life goes on, and the families must deal with rationing, scrap drives, and propaganda. Joey is angry at the local military recruiter and sets fire on his property, but Nellie covers for him, and the man is actually very understanding. Nellie’s best friend, Ruby, has a grandfather who raises pigeons, and the girls go about their days, attending school and church. Since the weather has been warm, Pastor Mitchell and his wife, who is expecting, plan on taking some of the children on a picnic in the woods.

When the balloons are almost done, the soldiers let Tamiko know that they will be used to bomb the US. Tamiko tells the other workers, who are all glad to help the soldiers and hopefully bring a swift end to the war by attacking the US. Suki has been sent home because she is coughing blood, a sure sign of tuberculosis. Hiroshima is bombed, and Suki feels that attacking the US is not the best idea, but Tamiko is still so worried about her brother that she falls out with her friend over this. Conditions continue to worsen as the Japanese food supply is cut off, and even the local trader has nothing to give Tamiko for a picture frame, or even to eat herself. When Kyo comes home, but is injured, Tamiko continues her attempt to fold 1,000 origami cranes and hope that the war will soon be over.

On the church picnic, Nellie is worried about Joey, who is still struggling with his brother’s death. When Mrs. Mitchell takes some of the children into the woods to look for another, Nellie is just about to head after them when there is a huge explosion. One of the balloon bombs made in Japan had landed on Gearheart Mountain but not exploded, but detonated when it was perhaps kicked. Five children, along with Mrs. Mitchell, were killed. Joey and Nellie both worried it was their fault, for various reasons, and their small town of Bly is rocked by the deaths. They don’t quite understand why the Navy had to be called in to investigate, but they later find that these bombs have landed around the US, but had not killed anyone. There had been a gag on the press reporting the bombs, which was lifted for public safety, albeit too late for Bly’s residents. When a family of Japanese citizens goes through town shortly after the funerals, since internment camps were being closed, the residents attempt to stone them. Nellie, however, goes out with a pitcher of water and yells at her neighbors to leave them alone. She’s all too aware that her father is still out there, and that more hate is not the answer.

Good Points
Just when I thought there were no more WWII stories for me to discover, here is one that is entirely new. This is based on the only civilians who were killed by enemy weapons on mainland soil, Vernick does a masterful job of weaving together both sides of the balloon bombs in a sympathetic way. Young readers might be surprised by Nellie’s derogatory use of the term “Japs”, but this book does manage to capture the sentiment of characters from both Japan and the US.

In addition to delving into the complicated emotions that war engenders, which were well researched and had several sensitivity readers for Tamiko’s story, there are a delightful plethora of historical details about daily life. Lee and Low, now the parent company of Cinco Puntos Press, always produces books that handle cultural topics sensitively. I’m a huge fan of working the smallest details into a story, such as the teacher being (gasp!) barelegged but drawing a hosiery line up her leg, visiting the Best Novelties store to look at toys, or describing some of the meals caused by rationing. Vernick doesn’t collect these details just for life in the US, but does a great job of mentioning details of clothing and food in Japan. The one inclusion that I found fascinating and wanted more elaboration for was the pills that the girls working on the balloon received with their rice balls; I knew that the Germans gave their soldiers cocaine and methamphetamine so that they could fight longer, but the stimulants for the girls was only mentioned in passing!

This was a sad but utterly riveting book detailing two sides of a devastating conflict that should have been a warning against all future wars. While Burkinshaw’s The Last Cherry Blossom or Napoli’s In a Flash offer rare glimpses of life in Japan during WWII, there aren’t many books that cover this topic, so this is a great addition. Other than Seiple’s Ghosts in the Fog or Giff’s Island War, there is little about attacks on US territories during WWII. The combination of historical detail, unusual history, and exploration of the emotions of two similar girls on opposite sides of a conflict made for riveting reading. If you read just one WWII book this year, make it The Sky We Shared.

You are here: Middle-Grade Review: The Sky We Shared by Shirley Reva Vernick