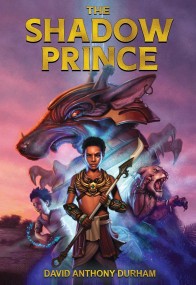 Growing up as an orphan in a remote village in the Egyptian desert, Ash’s life is pretty ordinary–sort of. He spends most of his time working in irrigation canals and avoiding bullies, but he is also being secretly trained by his mentor Yazen for some great purpose. Yazen has never said what that is, until now: the night before Ash’s twelfth birthday. According to Yazen, Ash was born on the same day as Prince Khufu, which makes him eligible to compete to be the prince’s shadow, a lifelong confidante and bodyguard. Ash doesn’t really believe Yazen, but when a floating royal barge, driven by solar-powered sails, arrives to take Ash and his mentor to the bustling, magical, and solar-powered capital, things get real.
What awaits Ash is deadly–five days of dangerous tests, each overseen by a different Egyptian god. Unfortunately, they’ve been told, not all will survive. On top of the tests, Ash is up against Set, the devious god of chaos, secretly working toward the candidates’ demise. If they fail, a different prince will inherit the throne, one Set can manipulate for his evil schemes. Ash finds two friends willing to fight by his side, but he’s been warned. Some candidates lie, cheat, and even try to harm others to win. Can Ash and his friends do what it takes to save the kingdom? And will there be anyone left to become the Shadow Prince?

Trust yourself and your abilities.

What worked:
The story is set in Egypt and shares information about its history, mythology, and culture. Ash grows up as an orphan in a small village along the Nile River and his job is to clean the canals in the irrigation system. Solar energy is widely used as the god Lord Ra shines his power down to earth each day. The irrigation system, sunboards, and some flying vehicles are all driven by the sun. Ash travels to the capital city of Memphis on a sunbarge where he enters a trial of tests to determine which twelve-year-old will become the shadow prince. The pharaoh, gods, and goddesses are part of the council overseeing the contest to decide which candidate will defend the prince for the rest of his life. All of Ash’s challenges are based on Egyptian gods and mythology.
The story addresses different forms of prejudice, tolerance, and bullying. In Ash’s village and the capital city, the wealthy look down on peasants as lesser humans. He’s bullied by the son of a wealthy merchant at home, and the son of a politician during the trial demeans him at every opportunity. Some characters believe the pharaoh is too sympathetic to the poor, and his willingness to negotiate with other countries displays weakness. These people have resolved to do what it takes to maintain a wide disparity between the wealthy class and everyone else. Ash doesn’t feel this way, and he accepts the range of personalities and backgrounds among the candidates for shadow prince.
Most of the story is told through Ash’s eyes with periodic chapters sharing the covert plans of the prince’s brother Rami and the god of chaos named Lord Set. These chapters share their plans to interfere and describe their tenuous relationship. The candidates to become Rami’s shadow prince all perished, so his younger brother Prince Khufu will become the pharaoh’s successor if Ash or someone else succeeds this time. Rami and Set scheme to kill all of the candidates during the new trials, so Rami will remain the crown prince. This subplot grows throughout the book and is sure to continue in the sequel. The chapters told from Ash’s point of view reveal his insecurities, quick-thinking, and compassion for others that make him such an admirable character. He often finds inspiration from remembered words shared by his mentor.
What didn’t work as well:
Two characters cheat, and worse, throughout the trials and are never caught. One of them is even rewarded time after time due to the ignorance/blindness of those running the trials. While this behavior is infuriating, it stokes readers’ emotions and develops additional drama in the story. The end result is a plot that will captivate readers.
The Final Verdict:
Trust yourself and your abilities. This book feels very similar to Rick Riordan’s stories, as Ash is an underdog human battling gods and mythical monsters. It combines adventure, tension, humor, and action to present a story that’s sure to become a middle-grade favorite. I highly recommend you give it a shot.

Raising Don: The True Story of a Spunky Baby Tapir
Sloth's Treehouse Inn
Koala Crossing
Frank and Bean: Food Truck Fiasco
How You Grow Wings
Coming Up Cuban: Rising Past Castro’s Shadow
Booked Graphic Novel (The Crossover Series)
Haven: A Small Cat's Big Adventure
Empty Smiles (Small Spaces #4)
The Secret Letters (Mysteries of Trash and Treasure, 1)
On the Trail (Peanut, Butter, and Crackers #3)
Elmer and the Talent Show
Millie, Daisy, and the Scary Storm
Victory. Stand!: Raising My Fist for Justice
Not So Small
Good Eating: The Short Life of Krill
Tell Me a Lion Story
Whistling for Angela
The Poet of Piney Woods
Bone Weaver
Pilar Ramirez and the Curse of San Zenon (Pilar Ramirez Duology #2)
Blood Like Fate (Blood Like Magic, #2)
Do Baby Elephants Suck Their Trunks?: Amazing Ways Animals Are Just Like Us
Milo and Marcos at the End of the World
Our Shadows Have Claws: 15 Latin American Monster Stories
How to Become a Superhero
The Philosophy Resistance Squad
Declaration of the Rights of Girls and Boys
Lionel Poops
The Ape Star