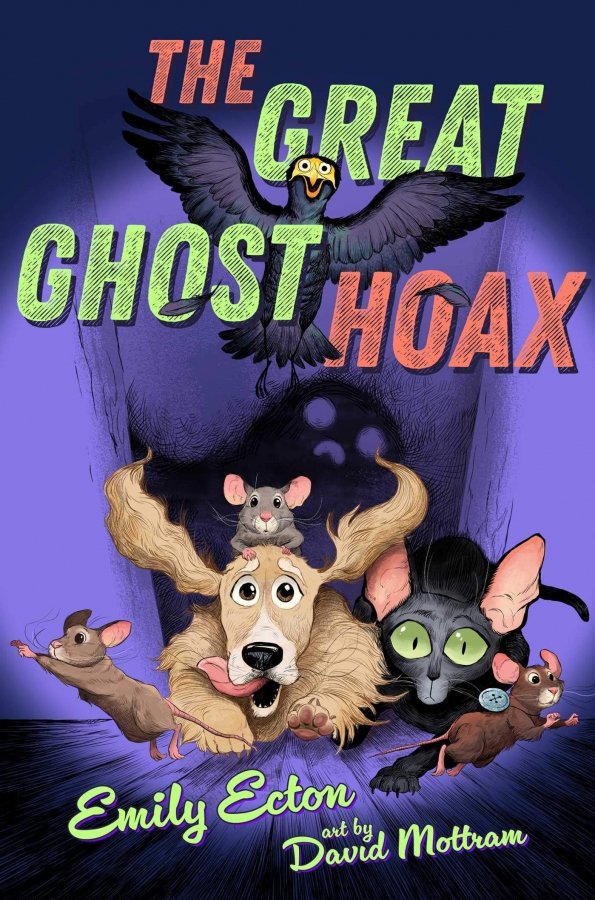 Butterbean is bored. She and the other pets pulled off a heist once, but that was like a million years ago. Nothing exciting has happened since then. That is, until Mrs. Third Floor shows up at their apartment, convinced there’s a ghost in the building.

Mrs. Third Floor’s rental unit is showing signs of paranormal activity—eerie noises, objects moving when no one is there, fish disappearing from the tank overnight. The pets decide to investigate. Soon they’re confronted with a bigger problem than just ghosts: professional ghost hunters who are offering to drive out the spirits for a hefty fee. It’s up to Butterbean and the rest of the gang to save Mrs. Third Floor from losing her life savings to scammers, all while dealing with some really annoying new animals. Can the furry friends uncover the truth in time?

Butterbean and Walt are Back!
Butterbean and her friends have recuperated from The Great Pet Heist, and Mrs. Food is back home. Walt, Marco, and Polo are all bored, and even their girl Madison is finding life slow. Not for long! Mrs. Third Floor has seen a ghost in the fifth floor apartment she is cleaning up to rent. The ghost has eaten some aquarium fish, licked icing from cupcakes, and created a mess. It turns out that Wallace the rat did some of the damage, but there is still somethign a bit creepy going on. The pets start to investigate, but no one, not even the octopus Chad, knows anything. Mrs. Third Floor panics and calls the police, who are not all that interested in the crime but are a bit interested in the apartment. Upon further investigation, a creature from the past is discovered, but even he is not responsible for all of the mischief. Will Madison and her animals be able to solve this new mystery?
Good Points
Once again, the animals take center stage, and the mystery is not about what happens to them, but about what they DO. This sense of agency is especially fun when the creature from the past who is causing most of the problems is discussed. Since this is a mystery, I don’t want to spoil the surprise, but it was interesting to see the animals having to contend more with each other than the humans. The humans are panicking and are affected by the ghost hoax, but the underlying cause is created and solved by the animals. I would have liked to see more of Madison, however, since she was an interesting foil to the animal protagonists.

The adults are a bit clueless, and don’t seem to know half of what goes on in the apartment right under their noses. To be fair, there is a lot going on. The pets were a bit hard to keep straight at first, since it’s been a while since I read the first book, but it’s easy to catch up. The delightful illustrations by David Mottram help to clarify these characters.

None of the apartment buildings I’ve lived in were hotbeds of mystery and intrigue, but I lived in them when I was an adult. For children, there is a lot of scope for the imagination and a lot of people with whom to easily interact. This would explain why books such as Marks’s A Soft Place to Land, White’s Nightbooks, Papademetriou’s Apartment 1986, Ford’s The Mysterious Messenger, Markell’s The Ghost in Apartment 2R, Markell’s Click Here to Start and Stead’s classic Liar and Spy have so much mystery. The addition of animals makes this great for younger readers who like to think about pets having rich intellectual lives.