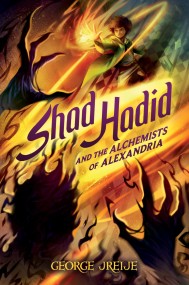 Twelve-year-old Shad Hadid has never quite fit in. The other kids at school don’t understand him, so he spends most of his time alone, cooking for his teta and daydreaming of opening his own Arabic bakery full of tasty treats. But when Shad is attacked by a shadowy monster, he learns his late baba was an alchemist with the ability to mix charms, elixirs, and mists—and he’s one too!
Then Shad receives an invitation to the mysterious Alexandria Academy, a fabled school for alchemists, where he hopes he’ll find safety and learn more about the ancient science. But when he arrives, no one at the school seems to know what alchemy is! As Shad digs deeper into the mystery, he discovers a sinister evil lurking in the shadows, and only he holds the key to stopping—or fulfilling—their plans.
With danger at every turn and the fate of the alchemy world on the line, can Shad save his friends and defeat this sinister foe?

Search for the good in an enemy.

What worked:
Shad moved with his father to the United States from Lebanon, so the Arabic culture is a big part of the story. Shad lives with his grandma, his Teta, since his father, his Baba, died in a car accident. He stops by a local bakery daily to enjoy the delicious aromas and to watch the baker’s assistants make baklava and knafeh. Arabic food is often mentioned throughout the story, and Shad often uses Arabic words as exclamations. He uses the word fig as a form of swearing or as a derogatory term toward others. Other cultural terms are used, but readers should be able to use context to understand their meanings.
Bullies are an issue for Shad at home and at the school for alchemy. Part of his problem is the fact that he refuses to back down to them, and he won’t stand by while others are being bullied. Sarah is his main antagonist even though they’d been best friends a few years ago, until her parents told her to stop hanging out with an Arabic boy. She bullies him at school and on the street, and he doesn’t make things better with his verbal barbs and pranks. On Shad’s first day at the alchemy school, he steps in when he sees a girl being bullied and he takes the blame when another classmate makes an embarrassing comment about the dean. This demonstrates his moral character, but it makes him immediately known to everyone at the school, including the bullies. Unfortunately, Shad is shocked when a familiar bully from his past appears and is determined to make Shad’s life miserable, and dangerous.
The early part of the book sounds like many other middle-grade books as the main character discovers he has unknown abilities and attends a school for training. The twist this time is when Shad arrives and learns no one knows anything about alchemy. Basically, alchemy involves mixing ingredients to create elixirs, powders, and other concoctions. It’s supposedly not magic, but the alchemist’s thoughts and intentions provide the final element to finalize the creation. The essence of the plot is how necromancers are trying to eliminate all alchemists from existence if they don’t share the necromancer’s evil objectives. They want to create an elixir to give eternal life and raise the original necromancer, but they can’t figure out the final ingredient or the measurements. Of course, Shad is the only one with that knowledge, so danger awaits him in the shadows wherever he goes.
What didn’t work as well:
Some “battle” scenes are harder to visualize/accept when characters are mixing ingredients to use as weapons or for defense. Can you picture combatants combining various ingredients while fighting is going on around them? Alchemy is like science and requires specific ingredients and measurements, but Shad often eyeballs the amounts of substitute compounds he uses. These concerns don’t affect the entertainment value of the book, but they just seem odd.
The Final Verdict:
Search for the good in an enemy. The concept of Shad attending a school for alchemy where no one has heard of it makes this story very imaginative. Shad’s an admirable protagonist, as his empathy, bravery, and determination drive him to succeed. I’m looking forward to the sequel, and I recommend you give this book a shot!

You are here: Middle-Grade Review: Shad Hadid and the Alchemists of Alexandria by George Jreije