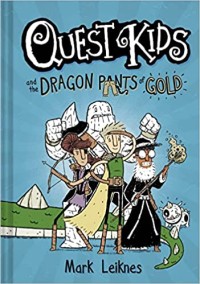 The Quest Kids are ready for their first real quest. This time, they won’t oversleep, they won’t be put off by a little rain, and they won’t accidentally burn down the village that hired them. All they have to do is find the Golden-Fleeced Rage Beast, shave it, and make a really nice golden tracksuit to appease a furious dragon. Simple, right?

Meet the Quest Kids crew: Gil, a wizard (well, wizard in training . . . the beard isn’t his); Terra, a 700-year-old elf kid; Boulder, a rock troll who is more of a cook than a fighter; Ash, a flatulent pig-dog-maybe-lizard hybrid; and, Ned, the intrepid and overly optimistic leader with his own personal quest to find his missing parents. With humor, magic, mystery, and at least one acid swamp filled with skeletal alligators, Quest Kids and the Dragon Pants of Goldis a richly illustrated saga of fantasy friendship for readers from all kingdoms!

What a fun adventure! QUEST KIDS AND THE DRAGON PANTS OF GOLD by Mark Leiknes is a middle grade graphic novel featuring four friends who seek out those who need help and attempt to provide it. Narrated by Ned, the de facto leader of the group, the story unfolds. Bristolburg has just hired two knights to obtain the golden pants from a dragon who lives in the mountains on the outskirts of the village. Ned convinces his friends to follow the soon-to-be roasted knights and de-pants the dragon themselves. One thing leads to another and the Quest Kids now have to save the village from the dragon. What does he want? A sweat shirt to match his golden pants. Can the Quest Kids find the beast with the golden hair in time to save Bristolburg from the dragon’s wrath?

What I Loved:
I loved every page of this book! It is such a fun and engaging read. The narrator frequently breaks the fourth wall to talk to the readers and explain what is happening and why it is happening. These breaks are interspersed with cartoon drawings, comic panels, maps, and J.B. Lucastoothe’s observations from reading and translating Ned’s text.

Ned, Gil, Terra, Boulder, and their pig-dog-thing Ash make up the team. Ned and Gil are human, a farmer and wizard apprentice. Terra is an elf, and Boulder is an MMOR (mostly made of rock) creature. They work as a dysfunctional team and are close friends, I would even go as far as to say they are found family. The dynamic works, and the constant banter is fantastic. I found myself laughing out loud multiple times while reading.

The plot itself focuses on the Quest Kids finding a creature with golden fleece. The quest takes them across the country side to lands none of them have experienced. There is constant movement in the plot whether it be from the action and adventure of the story or from the interactions and quarreling among the group. The chapters are short and encourage readers to continue reading even when they hit the end.

Final Thought: Adventure awaits in QUEST KIDS AND THE DRAGON PANTS OF GOLD by Mark Leiknes. Kids of all ages will enjoy the humor and action of this team of friends as they cross through invisible forests, battle foes known and unknown, and learn the true meaning of friendship.

You are here: Middle-Grade Review: Quest Kids and the Dragon Pants of Gold by Mark Leiknes