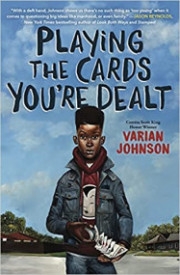 Ten-year-old Anthony Joplin has made it to double digits! Which means he’s finally old enough to play in the spades tournament every Joplin Man before him seems to have won. So while Ant’s friends are stressing about fifth grade homework and girls, Ant only has one thing on his mind: how he’ll measure up to his father’s expectations at the card table.

Then Ant’s best friend gets grounded, and he’s forced to find another spades partner. And Shirley, the new girl in his class, isn’t exactly who he has in mind. She talks a whole lot of trash — way more than his old partner. Plus, he’s not sure that his father wants him playing with a girl. But she’s smart and tough and pretty, and knows every card trick in the book. So Ant decides to join forces with Shirley — and keep his plans a secret.

Only it turns out secrets are another Joplin Man tradition. And his father is hiding one so big it may tear their family apart…

Know When to Hold ‘Em
Anthony “Ant” Joplin is in his last year of elementary school (where his aunt is principal– not at all awkward!), and enjoys hanging out in his small town with his best friend, Jamal. The two are very into the card game, Spades, so sneak a deck of cards into school so they can practice for the upcoming town tournament, since “trash talking” at school has gotten the game banned. His older brother Aaron, also an avid player, is away at a boarding high school. His mother works in the medical profession, and his father runs an accounting firm that seems to be in trouble. When Ant and Jamal play cards at recess, it doesn’t end well, and Jamal ends up being suspended for several days and is banned from the tournament. Ant is disciplined as well, but he does find out that the new girl, Shirley, is a good Spades player, as well as the daughter of one of his mother’s friends from her school days. Ant also finds her attractive, and has trouble dealing with his feelings, since he also wants to be friends and have her be his Spades partner, so their interactions are a bit awkward at first. Eventually, they find a way to connect and hang out, but Ant’s life is in upheaval. His father had been in rehab for problems with alcohol when Ant was very small, and now seems to be gambling heavily, and Ant suspects he is drinking. He tells Aaron, and when their mother finds out, she has the father move out of the house. The problems with drinking and gambling go much deeper than Ant expects, but he is too embarrassed to tell his friends, even though Jamal’s mother has left the family due to her struggles with drug addiction. He is even afraid to tell Shirley, and arranged to practice at her house. He hopes that his father will be able to overcome his addiction, and even tells his father that he and Aaron will be partnering for the Spades competition, since the man who organizes it says that this will be the last one. Shirley is understanding, and is willing to listen to Ant’s problems as well. When the tournament rolls around, will Ant’s father show his family that he has changed, or is there still work to do?
Good Points
This is a character driven novel filled with an appealing array of friends and family. Ant (who reads a bit older than ten) has realistic struggles in school. He works hard on his assignments but is easily distracted by Spades, and there are issues with other students and the way they act toward him. He enjoys being with Shirley, but wishes the other boys didn’t make fun of him for hanging out with her. Aaron is a concerned older brother, his mother a little too supportive, especially with her less than optimal cooking, and his father’s problems are shown most in how they affect Ant. I enjoyed the variety of supporting characters, from the teachers and principal at school, to local shop owners and Shirley’s parents. It was reassuring to know that Ant had a support network even if he didn’t wish to use it often.

There is quite a lot of information about Spades, a game about which I know nothing! Johnson gives a nice overview of how the game is played, and there are several games depicted, complete with the trash talk. It was also good to see that Shirley didn’t care much for that part of the game, and that Ant realized that his friends’ acceptance of trash talk in general wasn’t healthy.

The one thing that confused me a little was that the book was narrated by Ant’s deceased grandfather, but not in a consistent way. Since Spades is a family interest, and there is so much about the dynamics between Ant and his father, this could have been really interesting if we had more information about the grandfather. I wonder if some parts of his involvement were edited out.

It’s always good to see books with characters who have a passion about something, and Ant’s passion for Spades is central to this book. To see how he pursues this passion while also having to deal with significant problems in his personal life will appeal to readers of titles like Feinstein’s The Prodigy, Sumner’s Tune It Out, and Jones’ Jayla Jumps In, where children must deal with their families and how they impact their pursuits.

Spineless
Big Game (FunJungle #3)
Lion Down (FunJungle #5)
Panda-monium (FunJungle Book 4)
Punky Aloha
When Santa Came to Stay
Busy Betty
Raising the Horseman
Hunterland
Armadas in the Mist
The Darker the Skies
Jester
The Drowned Woods
Zyla and Kai
A Duel with the Vampire Lord (Married to Magic, #3)
Meet the Moon
The Second Death of Edie and Violet Bond
The Honeys
Big stuff planes, rockets, spacecraft!
Put a Lyd On It! (Wrassle Castle #3)
Dressing Up the Stars: The Story of Movie Costume Designer Edith Head
Ask the Girl
Dinos Driving
A Synagogue Just Like Home
Bear Has a Belly (Big, Little Concepts, 5)
Biscuit and the Great Fall Day (My First I Can Read)
Listen Up! Train Song (Big, Little Concepts, 2)
The Long Ride Home
Big Lies: from Socrates to Social Media
Raising Don: The True Story of a Spunky Baby Tapir