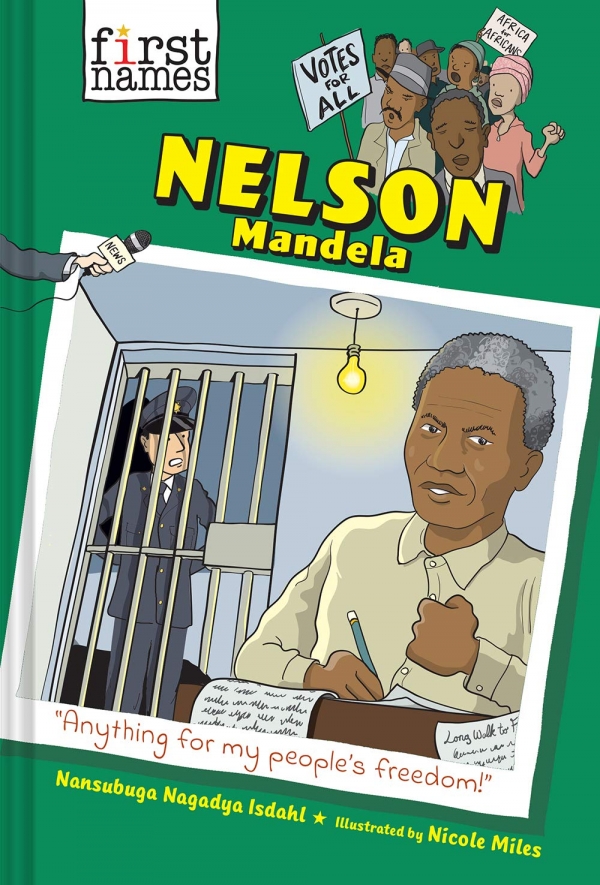 Before he was the first Black president of South Africa, Nelson Mandela (1918–2013) was a boy with a traditional Thembu upbringing. He went on to study law and become involved with African nationalist politics. The government had established an apartheid (a system of segregation that privileged white people), and Mandela worked to overthrow this system. He was arrested, accused of treason, and thrown in jail. When he was released, Mandela negotiated an end to the apartheid and was elected president. Though he was a controversial figure at the time, he is now seen as an iconic advocate for democracy and social justice. Inspiring and informational, Nelson Mandela tells the story of one of the greatest politicians and revolutionaries. It includes a timeline, glossary, and index.

First Names is a highly illustrated nonfiction series that puts readers on a first-name basis with some of the most incredible people in history and of today!

Very Complete Biography
Born in 1918 in Transkei, South Africa, Nelson Mandela was raised in a way that will seem very unusal to modern US students. Even though he was born into the royal Thembu family, his early years (when he went by his birth name of Rolihlahla) were spent in a very rural environment and he worked watching animal herds. When he was seven, his family sent him off to be educated in a Western style school, where his name was changed and he was forced to adopt British conventionalities. He was adopted after the death of his father by Jongintaba, the ruler of the Thembu people, where he was exposed to a more opulent lifestyle, although he still had chores to do. During college, he came to find out more about the way that Black people were unfairly treated in South Africa, and after joining the Student Representative Council, he became interested in politics and civil rights. He fought against the Pass Laws of the 1940s and eventually studied law, working with a firm that represented Black people, something that was very rare at the time. He married and had children, but his family life suffered as he devoted more and more time to civil rights issues. This work lead to his arrest and eventual imprisonment, starting in 1964. Undaunted, he continued his work with his second wife, Winnie, from jail. He was finally set free in 1990 and was elected as the first Black president of South Africa in 1994. He won a Nobel Peace Prize for his work, and is an example of the power of staying with ones convictions.
Good Points
While the cover of this book looks like it will be a simple, illustrated read, this book was packed with facts and information about Mandela and the history of South Africa’s racial divide. There are plentiful illustrations, although not a single photograph, and the glossary, time line, and selected bibliography round out the book.

I was surprised at how much background and history was included in this book. Most of the biographies of Mandela I have seen focused more on just what happened to him, and didn’t describe the cultural and historical background that was so important to his life and work.

Readers who enjoy biographies like Patrick’s Lewis Latimer from the HarperCollins’ Hidden Heroes series or Blas’s Who Was the Voice of the People: Cesar Chavez enjoy the mix of line illustrations and in depth discussions of important topics that accompany this biography. I would love to see more biographies like the one about Latimer, about whom little else has been written. The First Names series includes titles about Harry Houdini, Amelia Earhart, Ada Lovelace, and Ferdinand Magellan, but I am hoping that a biography series will eventually include lesser known Black historical figures such as Pastor Hiram Revels, Oscar Robertson, Margaret Murray Washington, and Flemmie Kittrell.