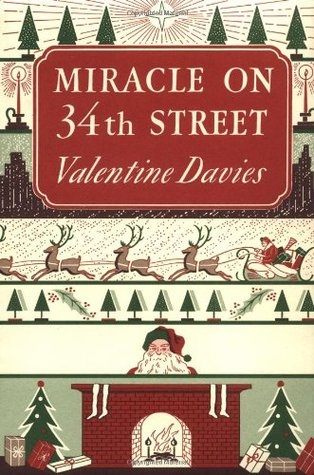 Generations of believers in hope and goodwill have made Valentine Davies’ Miracle on 34th Street a treasured part of their holiday traditions. Millions of copies of this award-winning story have sold since its first publication in 1947, delighting readers of all ages. A facsimile edition of the book is now faithfully re-created, offering a new generation–and fans of the original–the beauty of the classic 1940s design. Details of how the book came to be written, and made into a beloved film, are included in a brief historical note.

A Christmas Classic
Kris Kringle is about to be turned out of the Maplewood Home for the Aged in New York City and transferred to Mount Hope Sanitorium because the Board of Directors will only allow people to stay at Maplewood if they are of sound mind. Since he believes he is THE Santa Claus, he is considered unstable. Instead of being sent to the sanitorium, he takes himself off to stay with a friend who is a zookeeper for the reindeer at the zoo and somehow earn a living. In a fortuitous turn of events, he is at the staging area of the Macy’s Thanksgiving Day parade when the man playing the role of Santa is found to be inebriated. given his jovial, bewhiskered appearance, the parade director, Doris Walker, hires him on the spot to fill in. He also takes over in the department store, and takes the innovative approach of telling parents where they can find their children’s objects of desire for cheaper prices, even if it isn’t at Macy’s! This boosts goodwill as well as business. Doris is a very driven professional, who is raising her daughter Susan alone after a divorce. She is a pragmatic woman, and raised Susan to forego the frivolities of youth such as believing in Santa. Luckily, neighbor Fred indulges her a bit more. He also is interested in Doris as a romantic interest. When it turned out that Kris is considered to be unstable, Doris wants to fire him, but gets caught up in a trial to judge his competence. Susan starts to belive a bit in the mythology of Christmas, but will Santa be able to grant her fondest wish?
Good Points
This 1947 title bears some hints of its age, but holds up fairly well. It’s good to see an independent woman at this particular juncture of history, and I think Doris’ approach to raising Susan is sound. The dated aspects include quite different treatment of the elderly (especially since Kris is described as being around 75!), and different terminology for mental health conditions; “lunacy”is no longer a politically correct term. I wasn’t a huge fan of Fred’s pursuit of Doris, but he was generally a fine fellow, even though the dream of a house in the suburb and married life seemed very tied to post war feelings.

The cinematic orgins of the story also bleed through occasionally, and the sentimentality is typical of holiday fare from this era. Considering this was a movie before it was a book, it’s not a surprise. The writing is still strong, and the slim volume is a quick read.

I’ve never compiled a list of classic Christmas stories, but this would be a good addition to a holiday collection along with Dicken’s Cricket on the Hearth, Henry’s Gift of the Magi and Shepherd’s A Christmas Story.